Hello All - I have been AWOL for a while now, I didn't mean for this to happen at all. Rich and I moved apartments (we quite literally moved across the road) and it took FOREVER to get our internet connected and now it is thankfully all sorted.

I do have a lot to tell you about - but I decided to keep my return to blogging short and sweet.

I have noticed lately that a lot of bloggers have been doing "collection" type posts. Now we have some decent shelves to display some of our collections I thought I'd share them with you all.

First is the craft book collection: 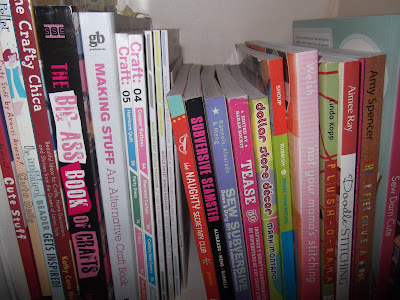 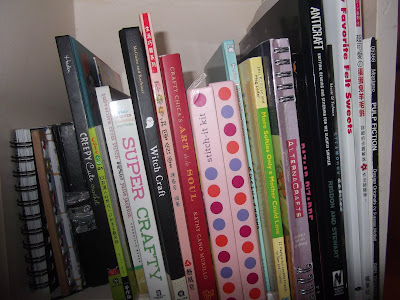 This first collection is solely due to me - I love craft books and just can't get enough of them. This isn't even all of my craft books a whole lot of them are still at my parents. Also in the corner you can see a few of my notebooks as well. 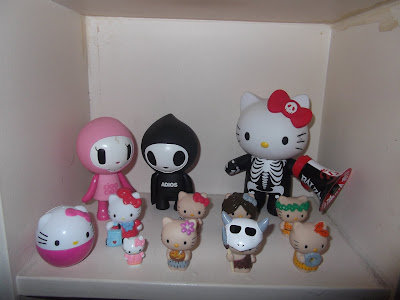 The Hello Kitty shelf - We bought the skull Hello Kitty at this big toy store in Tokyo - isn't it amazing, the kind of cave dwelling primal looking Hello Kitties I bought from the Hello Kitty store in Uijeongbu, South Korea. The Kitty that looks like she's about to take off on a long haul flight was given to me by my friend Nat when she returned from a recent trip to Hong Kong/Malaysia, the bigh round ball Kitty is a gift from my frien Germany and the tiny pink Kitty I recieved in a swap. The two guys at the back are obviously nothing to do with Hello Kitty but they suited this shelf best - I gave them to Rich for a birthday gift a few years back. 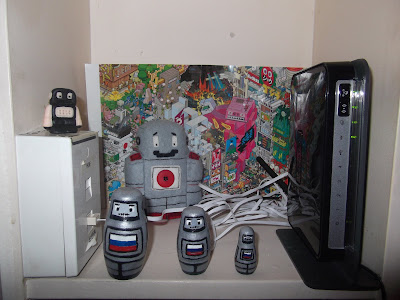 The Robot Shelf - the robots share their shelf with our modem. All of these robots are made by Rich. The Russian robots he upcycled from a set of Russian dolls that the paint was flaking off, the softie at the back is called "Meekie" and the little guy is made from polymer clay. The picture in the background is of a puzzle I bought Rich for Christmas last year and is a crazy pixelated version of Tokyo. We really need to get the picture framed and hang it up as its AMAZING! 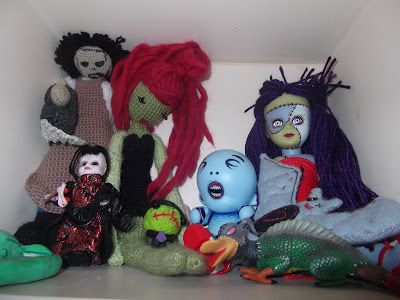 The Creepy Shelf - A selection of creepy toys - At the back is a crochet Leatherface made by my friend Vany and he is with his zombie girlfriend that I got in a craft swap, they are hanging out with a mini living dead doll that I bought in Tokyo and a little crochet zombie that my friend Schyler gave me, off to the left the green thing you can see is a zombie candle holder which is also made by my friend Vany, the blue guy is "Siberian Cave Munny" and he is another of Rich's creatures, the little bat is called "Love Bat" and Rich made him for me as a valentines present a few years ago and finally is my full size living dead doll and her "pet". 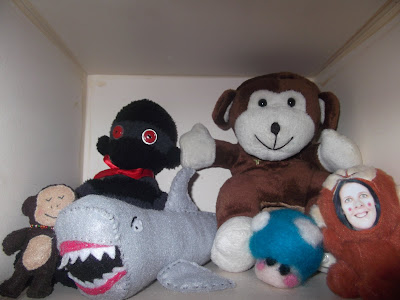 The Softies shelf - The stripey sock monkey is called Burton and I recieved him in a craft swap, the big monkey next to him we just call "Monkey" Rich bought him from Daiso when we were teaching to help teach some of his younger students, in the front row we have a little sleepy monkey which I made for Rich just before he left Taipei, next to that we have a big scary shark (I think sleepy monkey should be scared!) that Rich made during the Christmas/New Years holidays last year, then is a little mushroom that I needle felted and finally - yes that monkey on the end is me!! I had it made when we lived in Korea at a "make yourself into a soft toy" photo booth at the building where our local cinema was in. 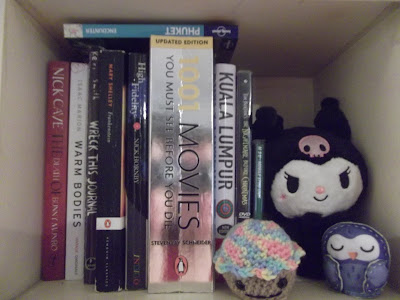 Everything Else - This shelf has a bit of everything we weren't sure where else to put it! A few of the books we have, although most are still at my parents (note the Phuket & KL guidebooks - planning for my summer trip!), Kuromi is at the back and is my favourite character in the Hello Kitty "universe" - I bought this particular softie at the Hello Kitty Store in Uijeongbu, South Korea. The little owl I made with a softie kit I bought while living in Taipei and the little cupcake I bought recently at a market I went to with my friend Ria.

Well thats enough of our collections for now - I will be back again soon - promise!

Also - I realise whilst this post may be sweet, it certainly is not short.

I love the creepy shelf. I feel like I should make you something both creepy and hello kitty.

Such a good idea to show your collections!
I love your craft book collection! I borrowed the Big Ass book from the library, it's quite good for ideas :)

Meg - One day when we meet. I shall teach you all kinds of words/phrases in NZ English. Then you can confuse your friends;)

Sadie - I love the "Big Ass Book of Crafts" I have two other books by the same author, Mark Montano on my shelves. He's amazing!

Helga! - I am rather obsessed by craft books (perhaps you can tell?) next time your in Wellington come around for a drink and a nosy. I can't wait till Thailand/Malaysia and where ever else I end up going on my trip! On a cold winters night all those lovely tropical places seem WAY too far away!!