An ode to failed projects

I decided that it was time to write an ode to failed projects, or at least admit I do in fact have failed projects. We all do know that social media only shows people's best sides, that's only natural, you want to show your best side to the world - I get that, because I do it, everyone does it!

I also have been feeling than in a lot of sewing blogs have post after post of amazing projects all finished beautifully with amazing photos. I'm a person that's generally pretty grounded, I tend not to compare myself with others, but I feel like all this "perfection" is really bumming me out.
Last weekend was a long weekend and I had ever intention of finishing off a project, a new dress with a cute cat print. I didn't finish the dress though, because every single part of this project went wrong and it was a complete nightmare and I finally gave up when Rich asked if I was still working on the same dress. He wasn't being rude or hurtful, he's actually got a fairly good handle on how quickly I can sew and cross stitch because he's pretty crafty himself. He made me realise I'd been working on this project WAY too long and it was time to let it go.

The thing is, sometimes projects go wrong - whether it's a sewing project, art work, cake or something else entirely. However most people don't admit to their failures on social media - blogs, facebook, instagram or whatever - we only really want to show the best of our life. 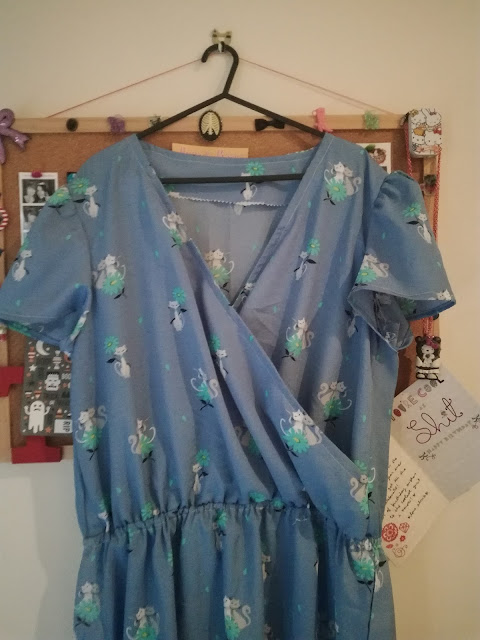 This is my dress, its a total failure - an adorable failure, but a failure nonetheless! I redid the waist casing in this thing three times and I reset one of the sleeves SEVEN times and it's still wonky and generally awful. This is a dress I will never wear, the whole thing is a hot mess and a total failure.

It's totally ok its a failure too, to start with I was pretty upset about the whole thing as I had spent a LOT of time on this project. However, now I've had time to reflect I'm ok with the failure because we all make mistakes and its good to actually admit that to the big wide world.

I've had some good advice from some sewing friends as to what to do next to lift my spirits (make a simple pattern or a tried and true pattern is the consensus) and I've also heard from a couple of friends who have actual formal training in dressmaking/design that the same thing has happened to them too a number of times. I'm just a home sewing hack, so if people with real training and skills makes mistakes, its totally ok for me to make mistakes too.

I have now cut out the fabric for a top in a very easy pattern and a dress in a very tried and true pattern, I'm going  to try and sew them up over the weekend and re-built some of my sewing confidence.

I hope you all are having a great week, and don't forget, its actually totally ok to make mistakes. Any adorable failures you'd like to share?
Posted by Trees at 5:34 pm 5 comments: 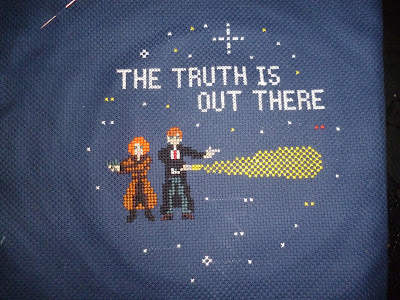 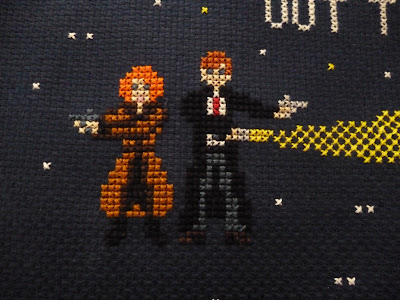 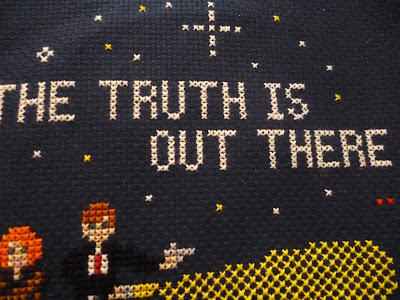 These close up photos show the colour of the aida a lot better, also pixel Mulder and Scully are the best!
Posted by Trees at 12:07 pm 2 comments:

Hello world! I've been away for quite a while now - no particular reason, things just kept happening and I didn't have much blogging mojo! I'm now trying to get back into the swing of things and I thought I'd share my latest make. 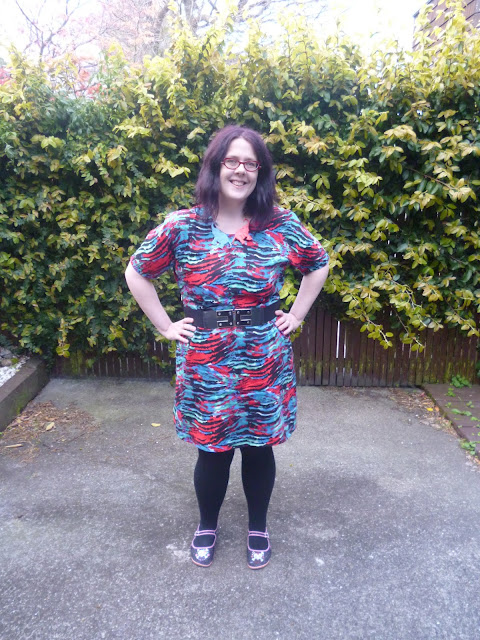 This dress is made from the Arum pattern by French pattern company Deer and Doe, I've made it before and last time I made it I had a million fitting nightmares so I decided to cut a size smaller this time in the hopes the neckline wouldn't be so gapey. 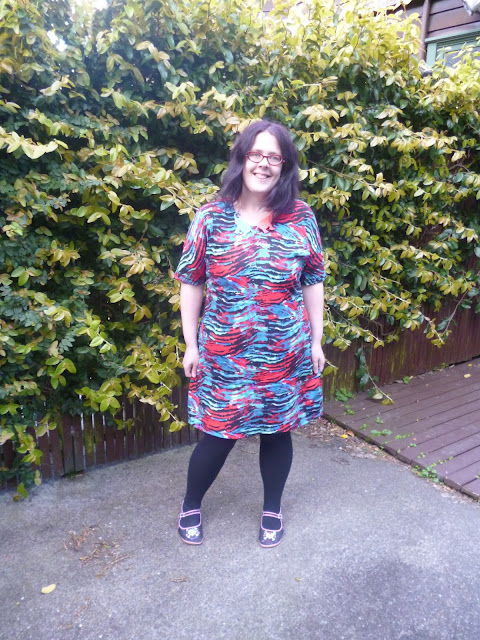 However, I only really remebered the nightmare fitting around the neck of the garment, when in fact the whole thing was kind of too big for me (always take notes of alterations) and as such the finished garment is pretty sack like without a belt, it needs to be more fitted in the waist/hips as well. Long story short, I think I need to cut a size smaller again! 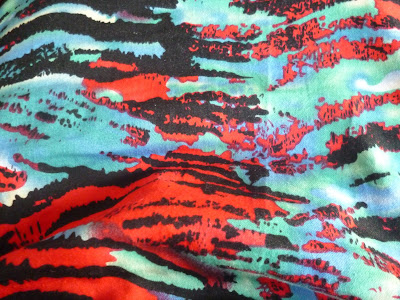 This fabric could best be described as toxic animal print and I mean that in a good way! My friend Joypicked this up for me at the legendary (at least among the Wellington Sewing Bloggers) Fabric Warehouse sale last year. The fabric sale is legendary as nothing is over $5 a metre which is probably the best value you can get for fabric (outside of Fabric a Brac of course).

It a heavy cotton fabric with a little bit of stretch which I thought would be perfect for a simple shift dress. 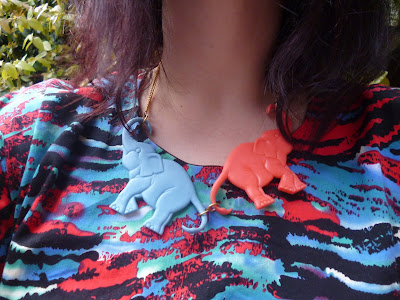 I wore my elephant necklace with the dress, I love these little guys, they remind me of the barrel of monkeys game! I don't have a lot of outfits to wear these guys with, so whenever I have one that I think will work the elephants come out. 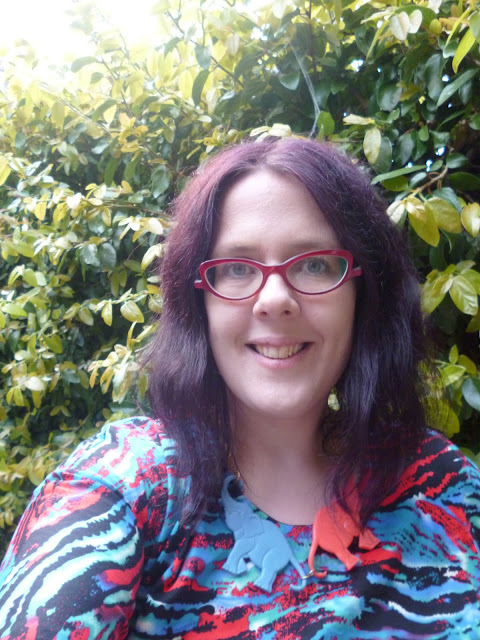 Also I dyed my hair dark again! I liked being copper and then red but really dark colours are my "natural" colours - I'm not quite back to my beloved blue/black yet. I'm trying out this deep purple colour for a while.

Hope you're all well out in blogland and I will try and get back to more regular blogging soon x
Posted by Trees at 5:02 pm 2 comments: