As some of you know - Rich and I have kind of been half arsed vegetarians for a while now. Rather than saying "Yes we are vegetarians" or "no we're not" we've been sitting on the fence with the "we only eat fish and chicken - not red meat though".

But it's kinda time we took a stand one way or the other - and we've decided to go to the vegetarian side of the fence.

Due to a number of reasons - but the whole battery farm chicken incident that has been in the media this week certainly helped us to make the decision.

So it's going to be a "meat free" life from now on which is a huge change! We're going to go to the vegetarian day that's happening in Wellington this weekend for some advice on what we should be eating and also hopefully recipes - I'm not sure what I'm going to cook from now on - eek! (although I did make some very nice vegetarian burrito's tonight - yum yum chilli beans).
Posted by Trees at 6:23 pm No comments:

On Monday I finally got around to seeing Hairspray with Donna, Anna and Caroline.

I know musicals aren't my usual scene but this one just looked so funny:)

The film didn't disappoint - I found it hilarous!! It was nice to see a film that I didn't have to be all serious and thoughtful about and just have a big laugh!

After the movie we decided to have dinner - we ended up going to this place called Chai on Courtney Place that I always thought was a cafe that just sold cake as it always has these really intricate cakes in the window that never looked quite like real cakes to me.

But as it turns out - as well as selling cakes that don't look quite like cakes it also does some pretty yummy Asian food. I think we decided it was Taiwanese?

Anyways in summary - Hairspray good and Chai (excluding the cakes that don't really look like cakes) good:)
Posted by Trees at 6:04 pm No comments:

Knitting project for Rich is finally completed - after many attempts! I seemed to just keep on dropping stitches by mistake and leaving big holes and having to start all over:( Although I have now started on another wrist cuff and that doesn't seem to be happening so that must mean my knitting is improving?

Anyways - here's a photo of Rich's wrist cuff - modelled by the man himself:) 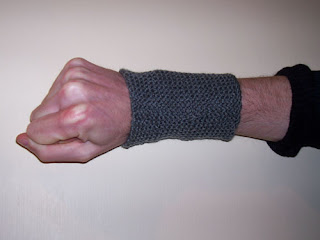 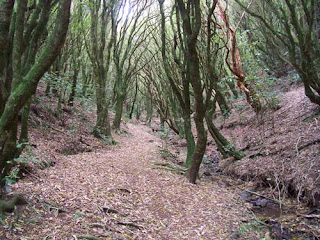 Yesterday the plan was for Rich and I to head out to Matui Somes Island - seen as the weather had been such a stunner it seemed like the perfect time to go!
However, yesterday the rain set in - so we decided to go for a bit of a walk instead down Holloway road and found a wee walkway at the end.
It was quite a short walk but it was quite a nice walk as well - I was surprised it was even there. Amazing how many little walkways like this there are in Wellington just waiting to be discovered. We seem to still be finding heaps of them despite living here for over 2 years. 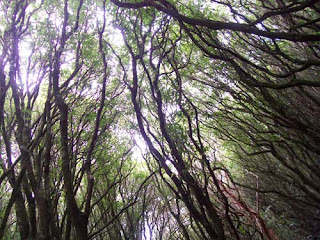 On Saturday night my friend Katrina was having a pirate flatwarming - yah! It was so long since I'd been to a dress up party and also ages since I had a chance to catch up with a lot of people seen as I'd been down and out with the flu:(

It was the best night I'd had out in ages - and many people were impressed with the pirate wench top I'd made with the help of Kat:) 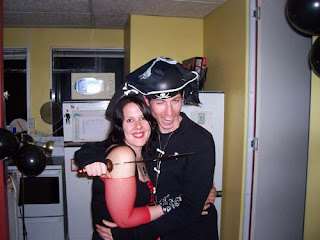 Rich and I having a pirate moment 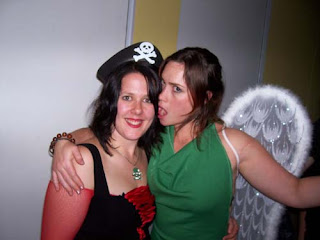 Henri as Tinkerbell - I think she wants to eat my ear? 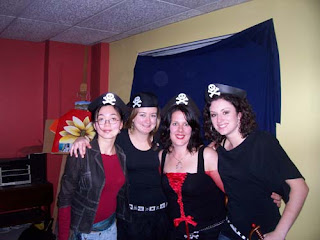 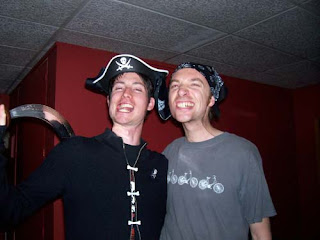 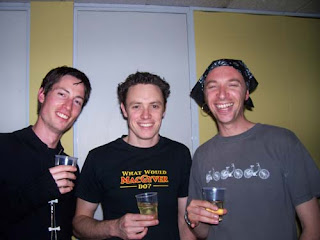 Rich, Simon and Ross - although the only one with any pirate cred in this photo is Ross! 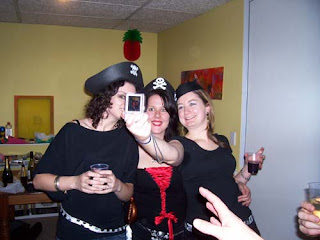 Celia, Katrina and I trying to take a photo of ourselves (just for fun!) 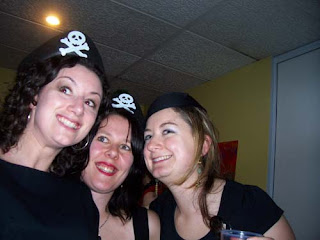 The outcome of Celia, Katrina and I trying to take photos of ourselves! 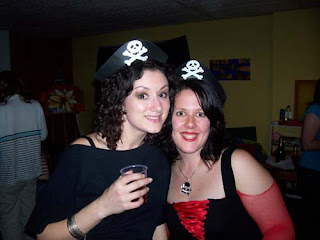 Celia and I as pirate wenches 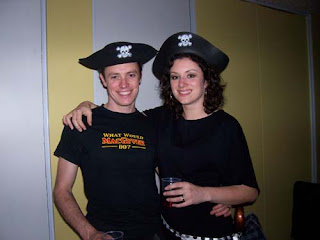 Simon and Celia - awww what a cute couple!
Posted by Trees at 10:49 am No comments:

On Thursday night I decided to enlist Kat's many an varied sewing skills to help my to transform a plain old black fitted t-shirt into a super cute Pirate wench top - I got the idea from BUST magazine.

So after some cutting, sewing a reshaping the drab old t-shirt was transferred to a pirate appropriate top. In fact - it turned out SO well I plan to wear it to non-pirate related events too;) 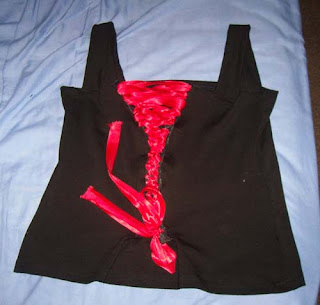 Finally starting to get some of my social life back!!

This weekend was the first weekend in ages I actually felt mostly "normal" although I still wasn't 100%. However, feeling mostly "normal" meant I could finally get out of the house and see some of my friends! Which was great because the bug I had caught had left me feeling pretty isolated:(

Anyways on Saturday I got to catch up with my good friend Carolyn from Taranki who I haven't seen in ages because she was down for a friends 30th. Basically I got to meet a couple of Carolyn's friends, we all went out and had some brunch at oriental parade and then spent some time hanging out in town and gossiping. It was fun just to see her and catch up.

Also whilst I was in town I was able to stop off at knitworld and pick up some wool and new knitting needles for my latest project - a pair of wrist cuffs. Watch this space! If they work out well I'll be sure to post a picture:)

In the afternoon Ross came around to visit - it was good to catch up with him and have a bit of a yarn. In the evening the three of us all went out and had some yummy Malaysian food and watched "Daywatch" the sequal to "Nightwatch" it was pretty good but some moments were a bit silly really and some moments left you thinking "hummm...this is odd...maybe it's some sort of cultural difference?" (as the film is Russian).

On Sunday I had a bit of a quiet one - Rich and I had morning tea at one of the little cafes in Aro Valley and then I spent the afternoon at a Muse meeting. It was good to see everyone though - it's been a while since we had a meeting:)

Then I just had a chilled out Sunday night hanging with Rich - I am now looking forward to next weekend though as this Friday Katrina is having a "Pirate themed housewarming" should give me a chance to catch up with a whole bunch of people I haven't seen for a while seen as I was knocked out with the flu bug.
Posted by Trees at 3:11 am No comments: 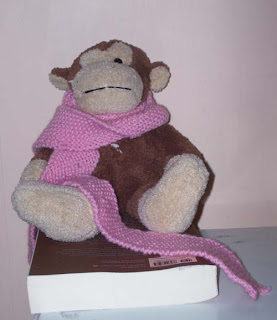 This is my first every knitting project, a pink skinny scarf as modelled by monkey. It may not be perfect - but it's not too bad for a first go - although I think it may be worn more often as a headband rather than a scarf.

I need to decide what project I want to make next before heading off to knitworld tommorrow - my options are a chunky scarf for Rich, a set of wristbands or an ipod/phone cover - although I do think I may be slightly out of my depth with the ipod/phone cover given it has a button hole - eek!

Early this week Rich and I found that we had been accepted for the Craftwerk markets again - yah!

But the markets this time are going to be a bit different because Craftwerk is on tour with a whole bunch of bands! Some creative people are actually touring with the bands - sadly we are not though (the tours going to about 5 cities - we just don't have that much stock and can't get that much time off work).

So we are just going to be doing the Wellington part of the tour - but I guess this means much much more crafting over the next few weeks leading up to the market/gig.

http://www.craftwerk.co.nz/
Posted by Trees at 3:45 am No comments:

I had a very exciting day today - I visited my friend Jess at work and paid for my tickets to visit Alaina in Melbourne at the end of October!

I'm very excited about visiting Alaina now:) I'll also have two days to myself in Melbourne (whilst Alaina is at work) so I'll have to get out the Lonely Planet and find some interesting things to do whislt I am there.

I am so looking forward to the markets and all the other arty type stuff!

Yah - good to have something to look forward to!!
Posted by Trees at 4:38 pm No comments:

I really think that this year has been pretty unfair to me health wise - I have the Flu yet again!!

I was feeling slightly dodgy on Monday and Tuesday and like death on Wednesday, Thursday and Friday.

Also been told it could hang about for up to 3 weeks - double *meh*
Posted by Trees at 7:46 am No comments:

Last Saturday night was my good friend Kat's 30th birthday and for her birthday celebrations she decided to take a step back into her childhood and have a child themed birthday party.

This is quite a cool idea - but I must admit I had forgotten how much bad food comes as part and parcel of children's birthday party - it was carnage - so so many sweet things. Which is never good for someone like me who can resist the hot chips and savouries but can never say no to a third helping of cake...hummm...

Anyways for Kat's birthday, Rich created an absolutely awesome skull earring for Kat - unfortunatly I can't post a picture of it here as it's a wee bit small to capture a good image of it on my wee camera.

I made Kat a cross-stitch for her birthday which was completely inappropriate for children (and easily offended adults for that matter). She loved it though - and I knew she would so that all that matters! 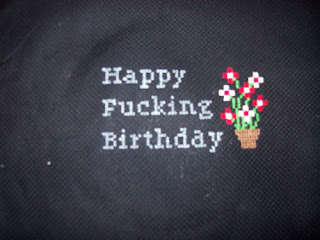 Here's a photo of Kat in her ladybug get up lighting the candles on her rather impressive birthday cake - I was annoyed I couldn't eat any because by the time the cake light phase came about I was completed stuffed to bursting with cakes, lollies and other such things. But the cake was really amazing - it reminded me of somewhere ompa loompa's may live (I'm talking old school ompa loompa's not the slightly creepy ompa loompa's in the Jonny Depp version of Charlie and the Chocolate factory) 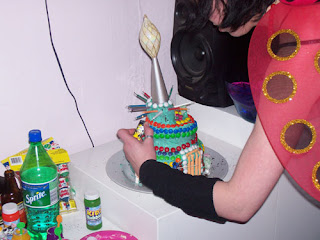 Kat (as a ladybug), myself (as a schoolgirl) and Barbara. 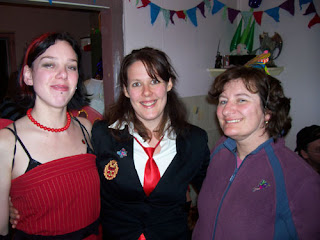