My Weekend and the Winter Chill!

Hello World! I have been a little quiet over the last few days but I do have quite a lot to share with you all. I had quite a productive weekend this weekend, on Saturday I went to a brand new class at my gym called "Ubound" which was actually pretty fun - it involved a lot of jumping about on mini trampolines.

On Saturday afternoon I went to my friend Ria's house and made further progress on my dress - which is actually starting to look more like a dress and less like a pile of fabric. I also had a sneak peak at Ria's burlesque costume - she had a audition on Sunday to be in a burlesque show so I'm crossing fingers she got accepted into the show!

When I arrived home Rich and I went to an opening of a art exhibiton called "Spooked" at Mygalaxi - a quirky little art gallery in town. 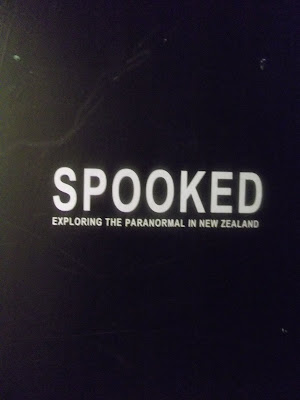 The exhibition was inspired by a new book which has just been published about the paranomal in New Zealand (duh - like the poster says!). I am a fan of all things creepy so I was pretty excited about this exhibition. I would love to buy a copy of the book - unfortunately we couldn't work out where it was being sold on the night of the exhibtion as the gallery was really busy! 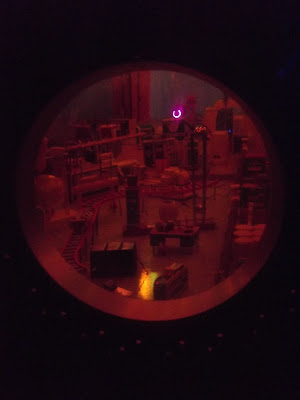 One of my favourite exhibits was this one - a peak hole which gave you a view of a wee city. I would love to make some a little city like this - it would be so fun. 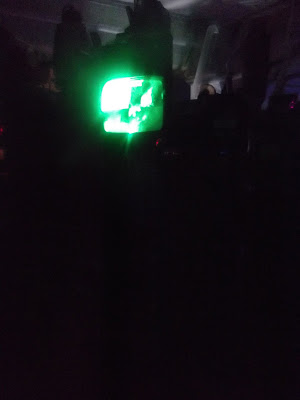 But the best thing about this work is when you look through the peak hole you face appears on a green tv screen, amongst a whole bunch of electronic bits and pieces. Reminded me of a Korean artist Nam June Paik who is famous for creating all kinds of crazy electronic sculptures. 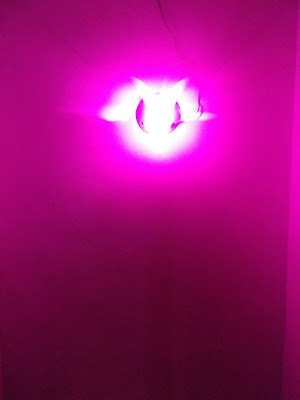 I also liked this glowing goat head very much - it kept changing colours, this photo really doesn't do it any justice. 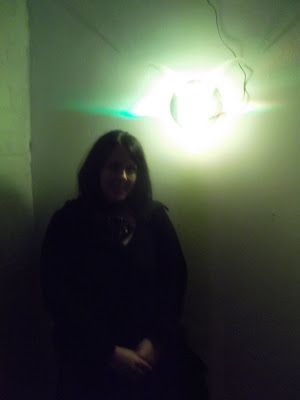 Creepy glowinggoats heads make me happy - I am a very strange girl! 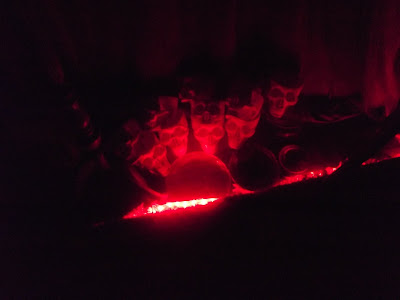 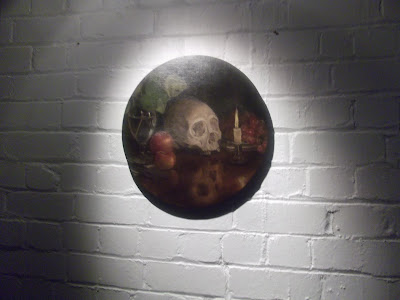 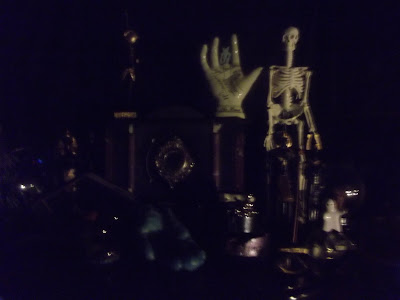 Here's a few more photos from the exhibtion - I especially liked the curio table. If you look there is a tiny ghost salt shaker in the right hand corner.
After the exhibition, Rich and I went for a wee walk along Cuba Street - when we arrived at Thistle Hall, this small artwork was outside and I really liked it a whole lot so I snapped a photo. I just love the way the dress is woven out of a fine wire. So delicate. 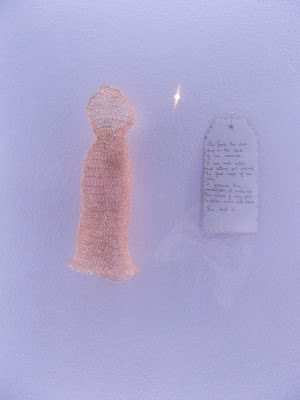 Sunday was a quiet but productive day - we went to the fruit and vegetable markets in the morning and it was raining A LOT. So after the markets we decided to stay at home in the flat. I ended up completing project number two in my Red Velvet sewing course and working on some swap stuff (I'll post photos of the sewing course creations soon).


Late afternoon we went outside and it ALMOST snowing in - however, friends in other areas of the city posted lots of photos on facebook it was really snowing in the hill suburbs and further out of the city. 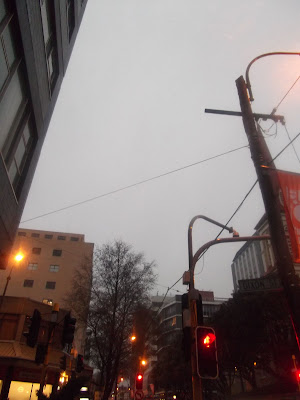 Here's the "snow" that fell in the city - we think its more like sleet than real snow. 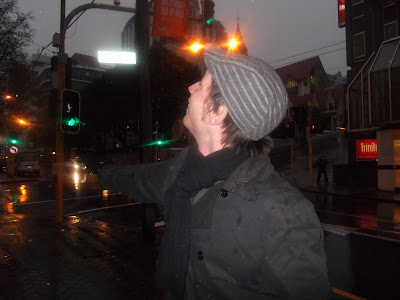 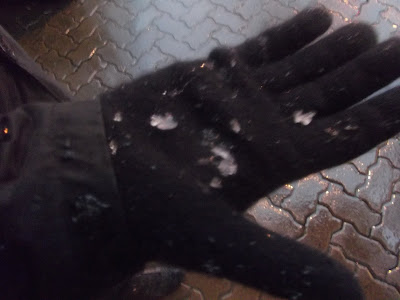 But when we were outside we did see this car and it looked like it had seen some real snow. 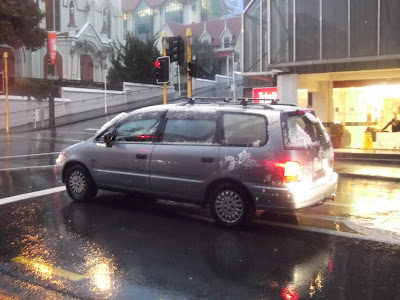 However, I have to tell you all that yesterday it DID snow in Wellington city! I was at work and tried to take a few pictures. But my camera didn't really capture the snow, which is a pity. The snow was pretty light and it didn't settle but it was still snow! It made for a pretty exciting work day and a VERY cold walk home from work (luckily for me I can walk to work in ten minutes!).

Today was another cold day and we had another short flurry of snow and when I was walking home tonight a hail storm hit! I took a few photos of the hail on the ground as it was quite a lot. 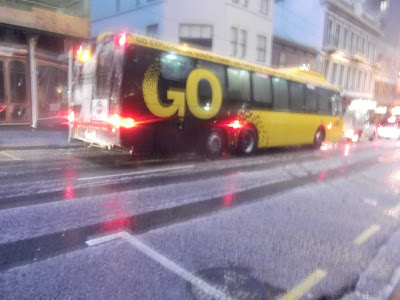 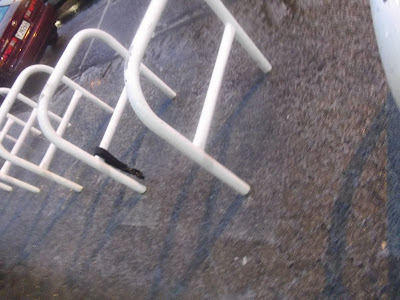 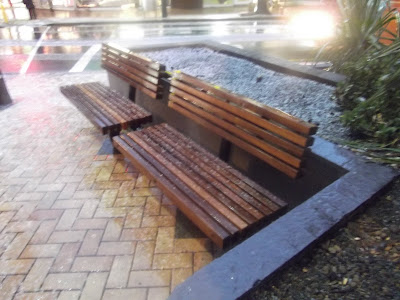 Finally - here's a photo of the carpark in our apartment block taken from our bedroom window. I feel cold just looking at it! I'm so glad we live in an apartment with good heating and insulation. 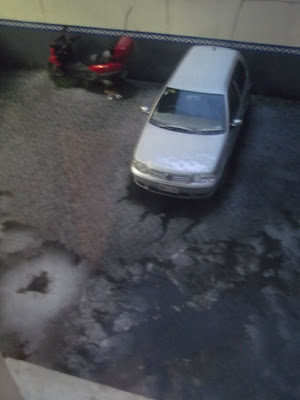 Hope you all had a good weekend and a good week so far and if you're in New Zealand I hope you're keeping warm in this arctic blast!

I can't believe it even snowed up north that's nuts!
I miss Welly, there's always some quirky little exibition or show or play or something on. It's a city with character.
You have to go to the burlesque show & take loads of pictures!! Wish your friend luck xo

Meg - Don't worry, I promise I shall have some sewing posts soon:)

Julia - I couldn't believe it when I looked outside my window on office key and saw the snow falling! CRAZY!!

I REALLY hope I can make it to Ria's show - its in Oct and we are planning a weekend away in Oct so I hope they don't clash!

wow!!! I had no idea it was that cold over there at the moment! Mind you we have had a pretty weirdly cold winter too! Loving the piccys, looks like a fun day! :)

Wait until Sunset - its doesn't usually get this cold where I live, this is "FREAK WEATHER" last time in snowed in Wellington was the 1970's! Yikes!

OMG I don't even want to think about snow yet!! That art gallery looks awesome, I need to find some cool places like that around here. I can't wait to see the dress you are making too!!

Thankfully the snow is gone and the weather is pretty mild again - it was totally a freak storm! The media called it "The perfect storm".

I am really bummed as the art gallery in these pics has now closed down - boo! Just found out today :(

I can't wait till I finish my dress - will post plenty of pics when its done (as long as it all works out!)