This weekend was one of the busiest ones I've had in a while and it was a total blast. Had so much fun catching up with friends. It all started on Saturday afternoon with celebrating Eva's first birthday. Eva is the daughter of our friends Celia and Simon - I neededed to bring a plate along to the party. So I made Hello Kitty Fairy Bread. I was pretty happy with the the final result. 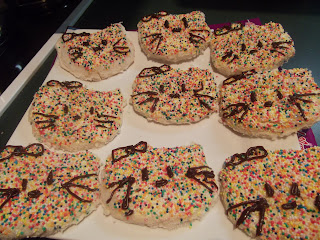 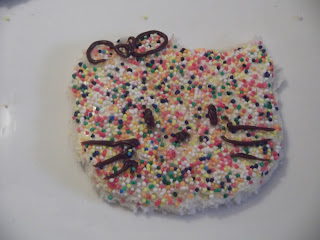 After the birthday party I met up with my friend Sadie for a nosy around the Fringe Markets where I bought a cute little teal shirt dress. We followed it up with a drink and something to nibble on at Expressoholic.

Later in the evening it was time to check out some more Roller Derby - this time it was our local league rather than an international game. We (well mostly I) decided to support "Brutal Pagent" unfortunatly they came in second to "Smash Malice". We have decided to work harder on supporters costumes for next time, which should be pretty fun as Smash Malice are a bunch of disgraced beauty queens. 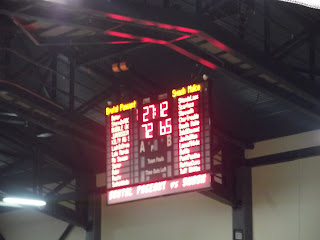 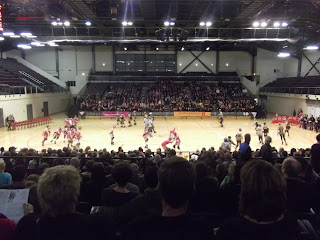 I also had a rather lovely morning on Sunday - I got to meet a fellow blogger and all round lovely lady Helga Von Trollop. Check out her awesome blog for details of her time in Wellington and a photo of the two of us together. I hope I can head down south and visit her when our lovely Christchurch is a little less broken.
Posted by Trees at 5:56 pm

Roller derby and shopping- that sounds like an epic time. ^_^ I wish I could meet some of my blogger friends- alas, most of y'all live on the other side of the world.

ROLLER DERBY!!!! i want to go to the local derby so bad! there was one last weekend but just didnt get a chance! hopefully i will see one this weekend!

Rosie - It's super fun! It will be more fun when I dress up as a digraced beauty queen;)

Meg - I am going to the USA this year. But the other side of the country to you (California, Oregon, Washington). But hey maybe we could work something out and catch up. That would be awesome.

cb - I hope you get to catch so derby:) What's the league/team names in SF?