First of all - I want to say thanks for all your lovely comments on the skirt and dress I made - I am such a novice dressmaker. I am at the stage where everything still seems quite difficult and when I talk to friends who are sewers or read sewing blogs where someone has whipped up a dress in an evening my mind in blown! It still takes me HOURS to make something simple, so its really great to have people say great things about what I make - you all rock!
Onto yesterdays challenge which was "floral" - I have about three floral dresses I thought I could wear. The first one I call my "nineties dress" as it looks like something I would have worn in the nineties had I been cooler and dressed more like grunge rock chicks I aspired to be like. I was wearing the grunge/nineties dress for a few hours before I realised some of the stitching had come away at the shoulder and I was showing off a rather striking bra strap! So the dress had to come of and has been added to my continually growing mending/alteration pile. Before I had a sewing machine I never had one of these, now its growing ALL the time - what's with that? 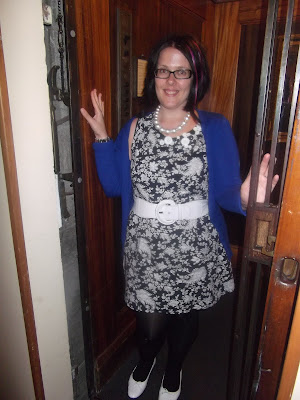 This is the frock I changed into - its not vintage, but it retro and handmade to boot which makes it even better. I think it has a kind of Sixties vibe with Seventies floral fabric.
You may be wondering where exactly I am standing? Well I did meant to ask Rich to take a photo of me when we were out on a walk earlier that day but I just forget. By the time I did remember that I needed a photo it was almost dark.
We did decide to do something a little different for a photo though as I am standing in the lift in our apartment - I love this lift as it reminds me of something out of an Alfred Hitchcock movie, we rarely use it as we only live on the first floor but I do think its pretty rad.
I really love living in our building, there are a lot of apartment buildings in Wellington but a lot of them are really modern and soulless - unlike our art deco apartment building. 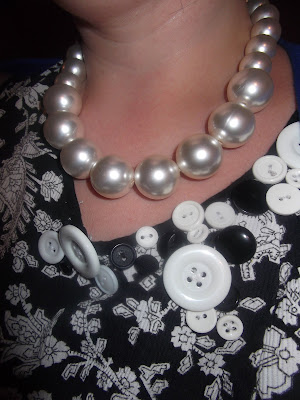 The dress has a whole bunch of buttons sewn to the neckline, which is a cute feature and I think it looks great as it keeps with the black and white of the dress. 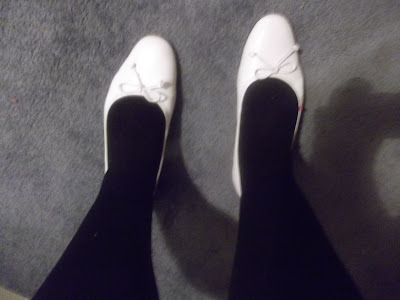 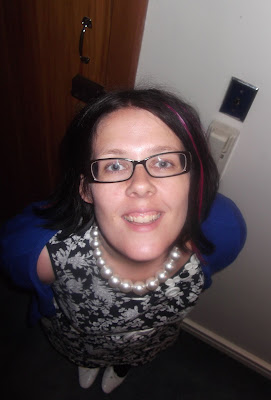 OUTFIT DEETS:
Shoes - The Big Shwop
Tights & Cardi - Glassons
Dress - Trade Me
Necklace - Equipt
I also finished another dress yesterday! There was much drama surrounding the making of this one which I will explain when I post pictures, but Rich was notably impressed last night when I showed him the completed dress and he isn't easily impressed!
I also have plans to do a spot of shopping today for my January/February trip whilst all the sales are on, I really need some sandals and as mentioned previously togs!
Posted by Trees at 4:12 am

Crikey love,nothing like raising the bar!!! That gingham frock yesterday is a sweetie!!!I've heard of that book,must check it out!
Yay for florals,can't go wrong!I was still mostly gothing it during that wonderful grunge phase,I do love it.
Having an elevator must be fun!!!Rather glamourous even!!!I love trying different places for pix,I'm always trying to make things more interesting!!
I forgot yesterday was Wednesday;I generally have no idea where I am/what day it is lately,and I quite like it!
Shop on,babes!

i have one of those types of piles too and i can never seem to get to them but i sure do add to it! i love the dress with the pearls and that lovely royal blue! it looks great on you!
xo,
cb

Pretty dress!! I love the buttons around the neckline - that's a cool detail :) looking forward to seeing the next dress you've made! It gets addictive aye??

Gorgeous frock! What is this challenge and why am I not doing it??

I love that fabulous lift - how Alfred Hitchcock to live in a marvellous art deco building... I would take pics in there all the time if I were you!

before i met bear literally everything i owned had holes in it. i was constantly stitching myself back together even when there was barely any fabric left in the seams. now i magically never have holes in my clothes for some reason...

i can't wait to see the new dress!