Here's the dress that made me completely crazy for about a day, let me explain. I decided to make the dress from some cheap fabric I bought from Arthur Toye Fabrics (which is only about 10 minutes from my house) - the fabric was usually $10 a metre, but it only cost $5 per metre with the half price sale they were having.
The dress is another one from my new Sew La Tea Do sewing book - I cut out all the pattern pieces and I was trying over and over to line up the back interfacing with the two back pieces of the dress and it just wouldn't work! Eventually I asked Rich to have a look at it, just to make sure I wasn't going crazy and he agreed that they didn't line up at all and that I should go online and she what I can find out as there may be something wrong with the pattern.
Turns out he was right, there was a printing error with the book and most of the pattern pieces were wrong! The next day I printed out the new pieces from the the "Meet Me at Mikes" blog (the author of the books blog) and went and bought even more fabric (thankfully they had more and it was still $5 per metre) and cut out the pattern again and began to sew the dress. 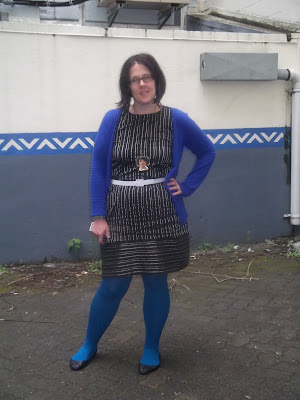 When I was almost finished I tried it on an I realised just how short it was - I'm not a tall girl by any stretch of the imagination but this was more like a long top than a dress. So I used my limited skills to add some extra centimetres to the bottom of the dress, I think its actually a kind of cool feature and it came out surprisingly well given I had no idea what I was doing! 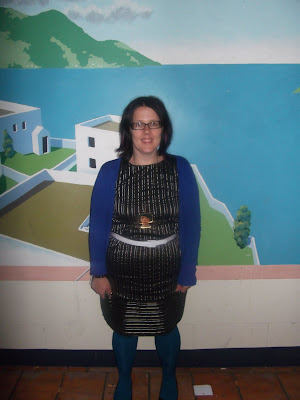 I wore the dress all of yesterday and it didn't fall apart or anything so that's a very good sign - I'm not sure if I would wear it with a belt again though. I'm just one of those girls who feels like I need to wear a belt with everything. This slightly awkward photo is taken in the driveway of our building that leads to the car park - its just like Europe :P Actually its a really weird spot for a mural as even on the sunniest of days its still dark in this part of the building. 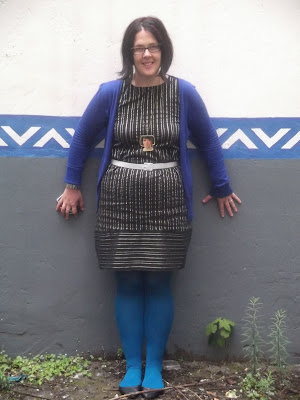 I also need to remember that outfit post should be taken at the start of the day not the end of the day - this dress looks creased from a couple of hours shopping, being taking off and put back on again when I went to the gym (I am a bad person and didn't hang it up when I was at the gym) and a few hours of crafting which involved crouching on the ground to cut out pattern pieces.
What do you all think - I feel like I am FINALLY making some kind of progress with my dressmaking. I think that today may be a craft day as its raining rather heavily outside! Oh New Zealand summer, you are so fickle!
Posted by Trees at 4:51 am

This is fab! And I'm the same, an outfit don't feel right without a belt! xx

Yay! I love the contrast at the bottom with the stripes going the other way :) awesome job!!

That frock looks great on you, & I like that extra hem panel the best. It really makes the dress. Love it teamed with your blue tights & cardy.