Last Saturday evening, Rich and I went to a roller derby bout. Our local league Richter City Roller Derby All Stars (for those reading this not from NZ - Wellington has a lot of earthquakes) vs The Sydney assassins. This was the first derby game I've seen since I've been home and it was awesome. Unfortunately our girls lost but they put up a pretty amazing fight against Sydney. Here's a photo I took at the game with my phone - unfortunately my camera battery ran out shortly before I got to the game and I didn't have a chance to charge it. 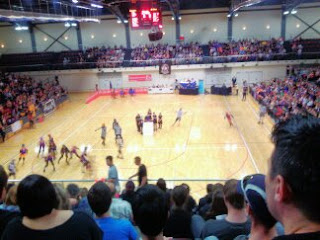 I did make one mistake on the night though - I didn't have a chance to go home and change before the game, so I was wearing red and black which are my favourite colours. Unfortunately, they are also the colours of the Sydney assassins! I should have been wearing purple and orange for RCRD!

So many people at the game were dressed up in great costumes - next time I will make a better effort with what I wear to a bout and support my league. I already have my thinking cap on - although I think I may be in Auckland for the next game. Plus that game will be between our two local teams Smash Malice and Brutal Padgent and a brand new team will be at that bout as well. If you're in Wellington you should go for sure!

The half time show at the game was a kapa haka group - Ti Tira Whakaau Kapa Haka. The group consisted of less than twenty people but their song filled the whole stadium. There were amazing. Plus they had amazing poi skills - the woman leading the poi could throw one poi in the air, then catch it and keep on twirling. It was so impressive. 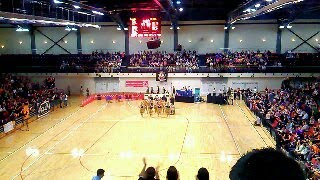 Are there any other derby fans out there? Any ideas for any great costumes consisting of the colours purple and orange for the next RCRD All Stars game?
Posted by Trees at 1:43 pm

I love roller derby! Philly's next one is April 2nd and I'm so excited!

The team up here my friend is in love with - the Broad Street Butchers- wear aprons and butcher uniforms. My team, the Philthy Britches, wear tailcoats and colonial outfits. SO CUTE.

Whoop! Looking forward to hearing all about the bout on the second.

I have to admit of the two teams - the Broad Street Butchers appeals the most. Sounds like Sweeny Todd on skates :D