When Rich and I lived in asia, one thing we talked about doing when when we returned home was joining the Wellington Film Society. I know this is a fairly geeky thing to do - but we both love films (although I have to admit neither of us are fans of blockbusters!).

The film society screenings are on every Monday - which works fine for me, but not so well for Rich as he is currently studing towards his Masters as well as working full time and he has class on Monday.

So I have decided to join the film society by myself, which is a pretty big step as I have never even been to the cinema by myself to watch a film and I am now committing to a whole year of watching Monday night movies by myself. I am sure also during the course of the year I will also meet other film geeks. 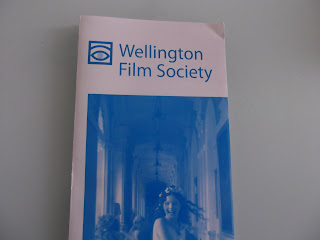 Sepeaking of film geekery - last night Rich and I watched "The Tenant" a Roman Polanski film from the late 1970's. It has some fantastic creepy moments as the main character decends into madness and I didn't realise until I started watching that the main character in the film was played by Polanski himself. Being a Polanski film there was of course cross dressing and a random moment with a cult. I enjoyed it and I was slightly creeped out - which is surely a sign of a good horror.

I actually LOVE going to movies by myself! Haven't done for ages,though.Haven't seen "The Tenant",either.Sounds interesting!This film society is a great way to see movies you ordinarily wouldn't see!
x

Thanks Helga - first solo movie mission was a success & I saw the most amazing anime.

I'm with helga! Go and have tons of fun (I like lunch by myself- just me, a restaurant and a novel for an hour. It's a nice way to relax!)