Recently my Mum sent me a package of winter vintage goodies - inside was some cute tropical fabric she has picked up at an op shop. She said that I could use the fabric to make something for our upcoming trip (more about that later - but it is a rather tropical destination), I wanted to make a maxi skirt but there just wasn't enough fabric. 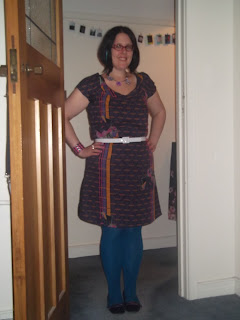 I did rather fall in love with the fabric and decided I wanted to use it to make something I would wear regularly, so I decided to make this simple little frock with it over Easter. I really want to get some orange stocking to wear with it - because I think that would be so rad. I'll have to keep an eye out for a pair when I am out and about. 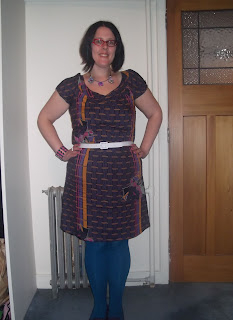 I'm finally back to work today after four glorious days of sunshine at Easter break - it was hard getting back to work and it was even harder having a personal trainer session at six thirty in the morning today. 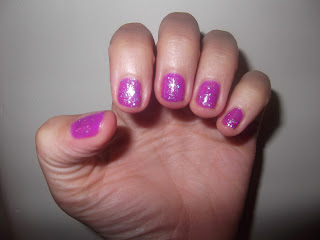 Easter Monday was mostly spent at Ria's house, we were working on our costumes for Armageddon which is happening later in April. However, Ria's sewing machine wouldn't play nice - she thinks it needs servicing, but that's ok as I got all my pattern pieces cut out ready to sew and it meant we could spend most of the afternoon hanging out, painting our nails (mine are pink with sparkles) and watching episodes of "New Girl". It was a pretty fun, chilled out girls afternoon - I haven't done that for the longest time and it was just great. Sometimes its just so nice to hang out with friends and do nothing much - I need to do it more.

Also in case you're wondering about our costumes for Armageddon we are going as Adventure Time characters which I am pretty excited about. I'm going as Princess Bubblegum and I have already cut out my dress all that needs doing now is sewing it up and making my crown.

Ria is going along as Fionna - the female version of Finn from the gender bender episode of the show. If you've not checked out Adventure Time before, you totally should. I watched recently when I was sick on Ria's recommendation and it was awesome! I may be a little hooked now.

I'll update you all with the progress of my Princess Bubblegum cosplay outfit as I progress with it - all I need now is to find an exceptionally long pink wig.

Hope you're all having a great week xoxox
Posted by Trees at 5:29 pm

It's cute. It will look fabulous with some orange stockings. It'll make the orange stripe really stand out. Ugh, 6.30 in the morning. You are brave.

Super cute frock in such great fabric. Jealous of your sewing skills yet again! Xx

Looking good my dear and I can't wait to see this pink cosplay outfit, I have a feeling I'll love it! 6:30 work outs rock, good for you, now go kick today's ass!

i can't wait to see your peebles costume! :O

i want to go to this armegeddon! we are going to dress up like adventure time for halloween this year! i am going to be marceline! i can't wait to see your costumes!
xo,
cb

I have never been to Armageddon! I could be persuaded sometime simply for the dressing up bit! I haven't even heard of Adventure Time,though!I'm always the last to know!!!
The new frock is a sweetie (and obviously,so is your Mama!),and yes,orange tights would be SUPER rad!!! XXXXXXXXXX

This costume lark sounds a lot of fun! Can't wait to see the finished pieces!
And i love lazy afternoons with friends too, sometimes it's so good to just chill out and chat :)

adorable! I love your new dress. I can't wait to see your costume!