Last weekend Meg and I had a virtual "sew-a-long" - I say virtual as Meg lives in Philadelphia and I live in Wellington, obviously Saturday afternoon arrives in New Zealand a lot earlier than it does in the USA so lets just say I got to the party a lot earlier than Meg did! 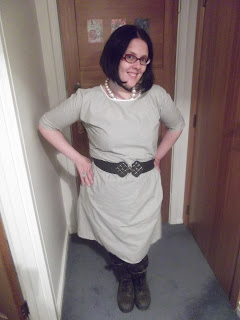 I didn't seem to get as much done at the sew-a-long as I wanted to - but I did finally finish my "Duvet Dress".

Recently I've been reading a lot of stuff about "green" sewing and re-purposing fabrics, so when I recently found a duvet cover at an op shop that I liked, I thought I would try and make it into something. Rich decided to get a bit artsy with this second photo! To be honest, I'm not sure if I entirely like this dress - but it looks better in these photos than it does in the mirror (at least I think it does). Perhaps its just because I'm used to wearing brighter colours it feels a little dull? Perhaps with a bright cardy and tights I will feel more comfortable in this dress.

Also, the dress is made of quite thick fabric seen as it used to be a duvet cover. Which normally wouldn't be so bad seen as it's autumn, but on the day I wore it to work this week the air conditioner was broken and it was 25 degrees in our building which was just too hot. All the guys were taking off their ties and rolling up their sleeves - and I was boiling in this frock!

I've been having a pretty super Easter so far - even though its pretty quiet. Lots of walking, hanging out with Rich and crafting. Fun times. Much of the crafting is related to craft swaps so I can't share pictures yet - but I am working on a frock which is made from some pretty awesome (vintage) fabric that my mum sent me. Hopefully I can share that with you all sometime soon. Have a super Easter Sunday xoxox
Posted by Trees at 2:15 pm

A quiet weekend is the best way to spend easter.

I think that is so adorable! I love it! If it feels a little too dull, though, maybe you could paint something on it? Or applique? OMG APPLIQUE HELLO KITTY ON IT!!!

I like it the way it is, though. Looks very polished.

We say duvet in the UK and Ireland too ;)
That looks brilliant. I would never have guessed it was up-cycled. Double brilliant :)

that dress is super cute and i love the cut and i LOVE that you made it from a duvet cover! way to be green girl!
xo,
cb

I really like this dress! The colour is a little dull compared to your usuals, but the cut is beautiful & it fits you like a dream. Doona/duvet covers are awesome to make things from! I always find they are so easy to sew.