Hello Folks! I am finally doing a blog post! Phew! The last week was crazy in every way - work is very busy at the moment and last week I went extra hard at the gym and I saw three movies at the cinema (as the World Cinema Showcase is on at the moment) and one play.

I thought first up I need to answer a few questions people had for me - first of all a few people asked where I bought the blank shoe clips to make these. I bought them off Ebay - I think I got about 10 pairs for $5, I can't remember the name of the store but I don't think it would be too hard to find some cheap shoe clips on ebay to make your own version.

Secondly, people asked what play we went to see - well it was one at Bats which is one of our local theatres here in Wellington. The play we saw was "Nucking Futs" and the byline was "Some people just shouldn't have the internet".

Finally CB asked if I would do an outfit post which included the Strawberry Dress I wore in a recent post about Singapore. I would love to do that - but I recently gave that dress away to a friend, sorry. You seen I had already taken the dress in twice over the months as I have been losing weight. It got to the stage where if I took it in any more it would have just looked plain weird. So I decided to give it to a good friend of mine who I knew would love it.

Finally onto this weekend, we after the craziness of last week I really just wanted a chilled out Saturday. My friend Emi came over in the afternoon for a "Crafternoon" and I finished up my Princess Bubblegum costume for Armageddon.

In the evening Rich and I went out for dinner at an "Eat out Asian" night that was happening less than five minutes down the road from us. Very close to our apartment is a group of shops called "Willis Village" which has a Korean, Japanese and Vietnamese restaurant and last night they had a food event where you could try food from all three different restaurants in one night. Plus they had lanterns and lights, outdoor seating and music. 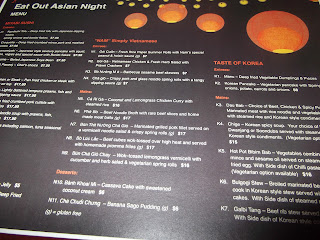 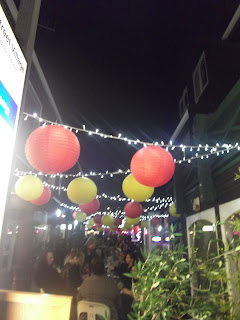 Rich and I bought something from each country - the rice paper spring roll from Vietnam, Teriyaki Chicken from Japan and soondubu chigae from Korea. 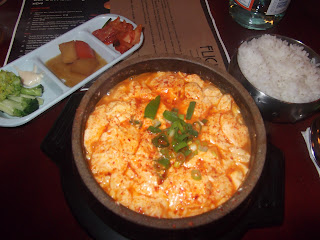 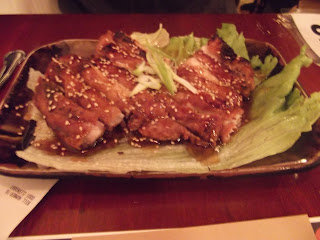 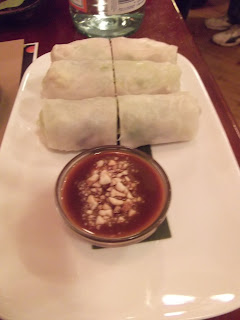 This morning we woke up and the sun was shining so decided to take a walk in the botanical gardens - there was suppose to be a Harvest Festival on at the gardens, but really that just meant a couple of pretty small display tables. I was a little disappointed as I had read they had a "biggest pumpkin" competition and I thought I was going to see some crazy 100 kilo pumpkin, but there was nothing quite as exciting as that. But it was a beautiful sunny day so it was hard to be too disappointed. 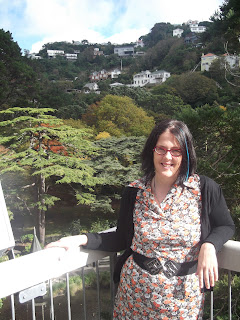 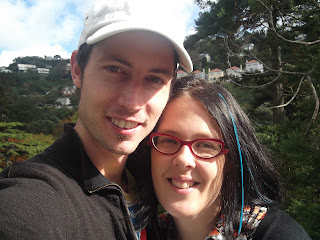 After the gardens it was time to head home and dress for "Armageddon" - I was excited! My first ever cosplay costume - I kind of felt like "I am now a sewer - because I can make a costume". First up here's a couple of photos taken back at our apartment of the Princess Bubblegum costume. 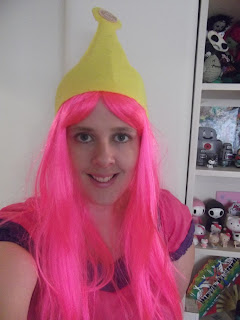 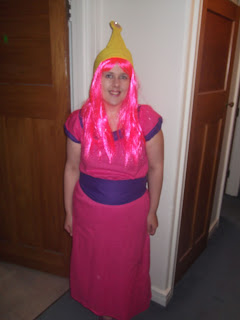 Then next up its onto the main event - Armageddon!! 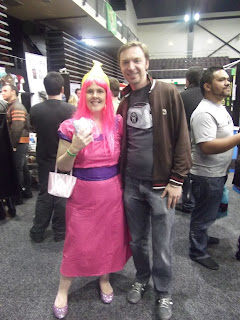 I met up with my friend Ross at Armageddon - yah! 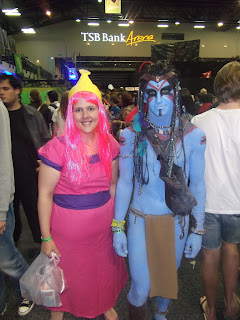 I also met this Avatar dude - now that's commitment to your costume! 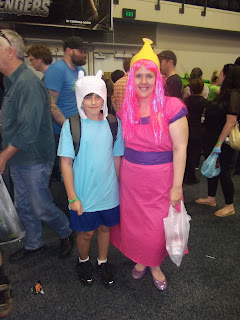 I met a "mini-Finn" his Mum and Dad REALLY wanted this photo - I'm not so sure that he was keen though. 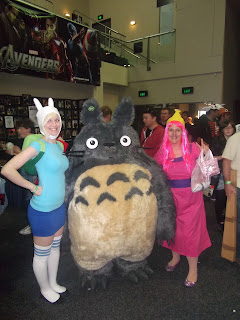 We met Totoro and it was so exciting! Totoro chased after Ross to give him a big hug as well. 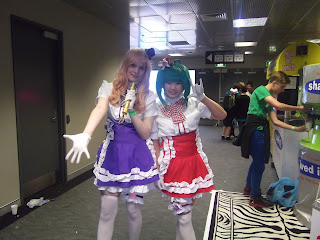 There were loads of people dress up as Anime characters - I know very little about Anime but I thought these two looked pretty amazing. 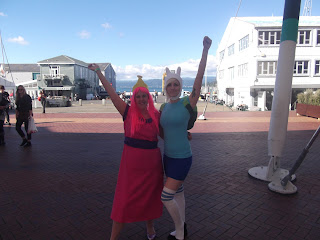 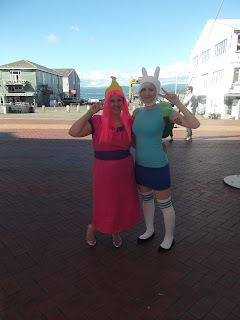 I had a great time at Armageddon, I was a little bit nervous before I left as I thought that my costume might not be "up to scratch" but I think it was pretty rad. I was expecting to see at least one other Princess Bubblegum - but there wasn't any others. Well, not that I saw anyway.

I did make a few purchases from Armageddon - the first is this adorable "Ninja Bear" it's made locally in New Zealand by Chibi Crafts & Designs in Auckland. This Ninja is "Sushi Ninja" but you guys may have already worked that one out. 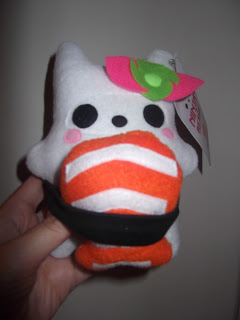 Next up is some Hello Kitty goodness (of course) - I bought this one as part of a "mystery box". Basically when you buy the box, you don't know which kitty you will get. This series included 10 different Hello Kitties all dressed in different national costumes. My Hello Kitty is Kenyan Hello Kitty - Rich's Dad is Kenyan and he visited Kenya as a child and he is unconvinced at the authenticity of the national costume. I still think it's pretty cute though. 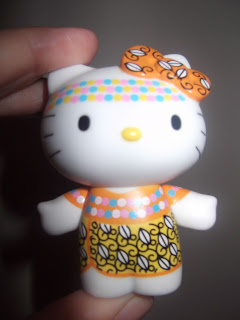 Finally (and this is my favourite) GLOOMY BEAR WRITING PAPER! I love Gloomy Bear, its the ultimate in creepy cute. I was so excited to find this, I almost don't want to write any letters on it because I love it so much. 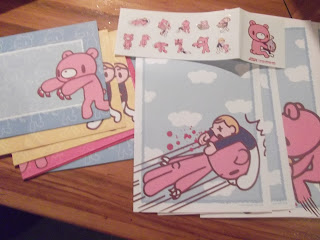 Finally - Rich, Ross and I finished off the afternoon with a coffee (well a tea for Rich and I) at "Memphis Belle". When we sat down I saw someone had done this drawing on the chalkboard and I thought it was pretty amazing. 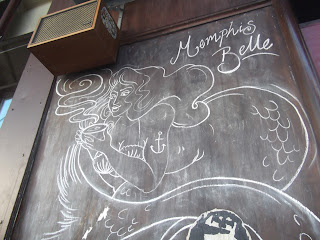 Hope you all had a fabulous weekend - mine isn't quite over yet, Rich and I have one final movie to watch tonight at the World Cinema Showcase.
Posted by Trees at 4:06 pm

ahhhhhhhh You look awesome!!! I've never been to a cos-play before but I'd love to! I think that costume definitely makes you an official seamstress!

also those chibi crafts are amazing!

I also love your sushi bear and your costume. I've never been to a con, it looks fun! Then I'd have an excuse to wear my Party Poison outfit again. Hugs!

your pb outfit is totally mathmatical! so cute! your friend is an awesome fiona too! <3 <3 <3

also, do you think that mermaid was inspired by me? because i do. :D

oh sad times about the dress but i am glad you gave it to a friend! oh i love korean tofu! there is a place my friend takes me and it is super yummy! you look amazing as princess bublegum!!!! oh and TOTORO!! oh i love him!
xo,
cb

Your costume looks great. I keep reading about Adventure Time, I might have to see what all the fuss is about. Pink hair really suits you.

What a busy busy day!! I did see some people in town and around the arena with costumes on, it looks a lot of fun. You did great with yours! And i love that Rich wasn't convinced of the Kenyan costume! hahaha so funny!!

OMG you are too cute!!!! I think you are a girl after my own pink haired cosplay heart! Your costume came out killer, I love it! I love Hello Kitty and Gloomy bear and you really showed self control I'm sure there was tons of stuff there you wanted to buy!