Fire walk with me

Hello all - I hope you all had a fabulous weekend, Rich and I did something a little bit different this Saturday - this picture may give you a clue what that was. 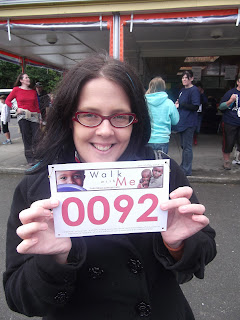 If you guess we did some kind of charity walk - then you're kind of correct. I'll give you all another picture clue. 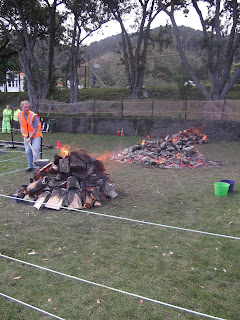 Did you work it out yet? Well the title of the post most likely gave it away anyway - but we did a fire walk (walking on hot coals) organised by the Eastbourne Scout troop.

The event was an attempt to break the current record for the most people continuously fire walking and the record was broken - so now we will be in the Guinness Book of Records. Well, maybe not our names as such - but we were part of the big group of people who helped to break the record. The preliminary result is that 615 people took part in the fire walk, the old record was for 350 people.

In case you're wondering, yes, the coals were hot! But its all over with in three or four steps so it wasn't so bad. Well it wasn't so bad for me at least. Rich got a nasty blister on the arch of his foot and the first aid people said it was the biggest blister of the day - not really the kind of record you want to have.

The world record attempt was to raise money for two Wellington based charities -  So They Can, which is a trust which does all kinds of good work with children in Kenya and the Children of Nepal Trust - when you see what these kids have to live with every day, taking a few steps in hot coals doesn't really seem so bad after all.
Posted by Trees at 5:57 pm

What a cool event to be a part of!! I'd love to try it out when day when I'm braver. xx

poor rich. i would totally have beaten his blister record because that's just what happens to me anytime i try to do anything! lol

so many wacky adventures! <3

Yowzer! I thought they always made out that you wouldn't actually hurt yourself, I knew it couldn't really be true! Or had Rich just not perfected his zen master mind over matter thing?

What an incredible thing for you guys to do, and for such a great cause! Poor Rich! I hope his blister heals up quickly.