It's finally September which means it is officially spring! I am pretty happy about all this, although I can't complain too much about the winter we have had, as overall its been especially mild this year.
However with the arrival of spring and my upcoming trip to Melbourne I decided it was time to say farewell to the green extensions and get something new for the new season.
I decided whilst I was at my salon this time I would take a couple of photos - I have been going to Wildilocks on Cuba Street since the start of the year and its such a great salon. They also sell clothes and accessories. Here's a wee shot of the salon from my chair out to the front window. 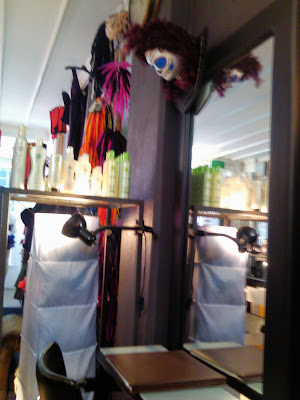 This visit they had added some of these "mounted heads" to the salon, complete with Mexican "day of the dead" style make-up. I liked them a whole lot, this is the lady that looked over me whilst I was having my hair done. 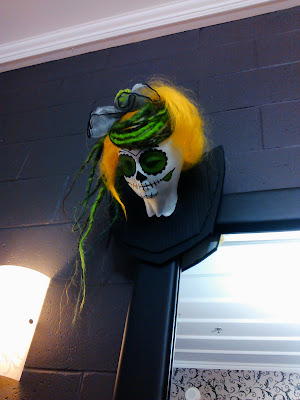 Here's what synthetic hair extensions look like before they are attached to someone's hair. I decided I wanted blue again this time, but a sky blue/turquoise rather than the electric blue I had last time. Although the hairdressers didn't have quite the colour I wanted, in the end I decided a blend of these two colours would work out just fine. 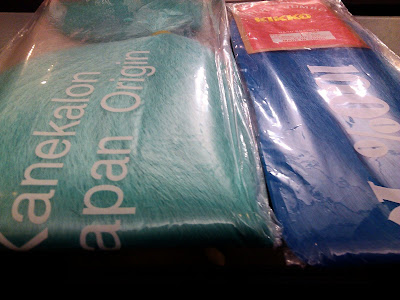 Here's the final result of my Saturday trip to the hairdressers - blue hair extensions! I like them rather a lot. 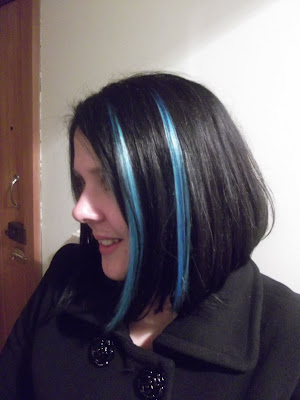 wow i LOVE your hair!
id love to get something like that, but im not brave enough ^_^
Rosie xo

Love that! I've been thinking about getting a few extensions again once my hair is longer.

Those heads are killer! Don't suppose they need American receptionists, do they? ^_~

i love the blue!! i was thinking of getting maybe a baby clue or mint color in my hair or possible lavender. i really want to do it but not myself and don't want to spend the money to have someone else do it. my sister in law was going to do them this last weekend but the shop where we go to get hair dye was closed, i was sooo bummed :(

Cute heads, I like that idea with the DOTD makeup!

And I really like the turquoise, great for a spring fling!!

Rosie - It was a big decision to get the first set of extensions, but after that I was hooked;) You should try it if you're feeling brave sometime.

Meg - The owner of my salon is Australian and my hairdresser is Germany, an American receptionist would only further expand on the international theme :D

Cb - Mint would be amazing!! I hope you get your hair done soon:)

Yay, the blue looks great!
I love the wee heads - their make up is well cool xo

Julia - Thanks so much. Seriously. How cool are the heads? LOVE!

Good blog: You should start many more. I love all the info provided. I will stay tuned:) makeup artist in Sydney