Yes, its another Seattle post - sorry guys, I just really had a fun time in Seattle. Our third day started with something I've wanted to do since I was a young kid (maybe sever or eight). So if you know me or have been following this blog for a while you will know I like creepy stuff.

The thing is liking creepy stuff didn't happen once I became a teenager or adult - I've always loved creepy stuff.When I was a kid, perhaps unsurprisingly my favourite cartoon was Scooby Doo, because I loved all of the monsters.

One episode I particularly liked was when Scooby and the gang helped to solve the mystery of demons in the Seattle underground.  The "Scoobypedia" (isn't the internet a great thing?) tells me the episode was called "A Frightened Hound Meets Demons Underground". 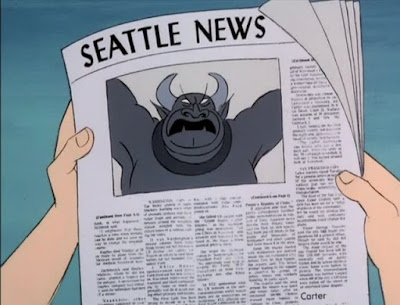 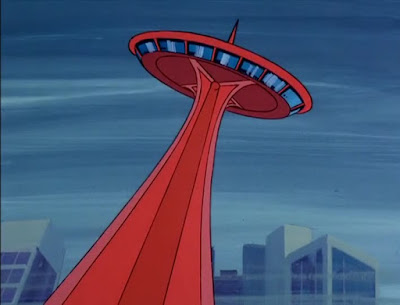 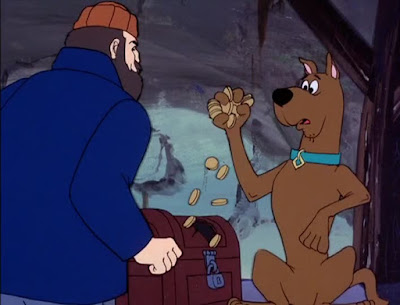 All Scooby images taken from here

When we decided to visit Seattle my memories of this episode of Scooby Doo were revived and I knew it was time to make my dream of visiting the underground city come true. 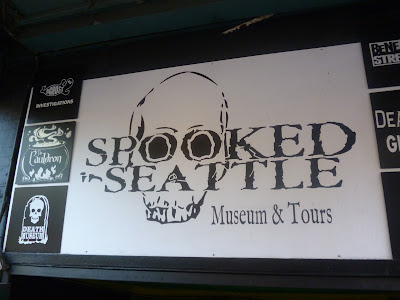 There are a few different companies that take underground city tours in Seattle, we chose "Spooked in Seattle"who we found out at the end of the tour were a relatively new company, which was surprising as they did such an awesome tour.

We started out at their headquarters (I guess you'd call it) which included a Death Museum  and the guide offered some background history about Seattle. One of the most interesting things was the colonial history as it related to the native American tribes of the area, including the fact that Seattle was named after a great chief. Our guide even tried to teach us how to say his name correctly, it wasn't easy!

Our guide explained the history of old Seattle - the problems with the city being built so low lying, the fire that triggered the city needing to be rebuilt on higher ground and how the rebuilt happened and they problems and issues there were.

While the underground city didn't look like it did on Scooby Doo (which included fully stocked stores) there were some fascinating things to see that had been left in tact. 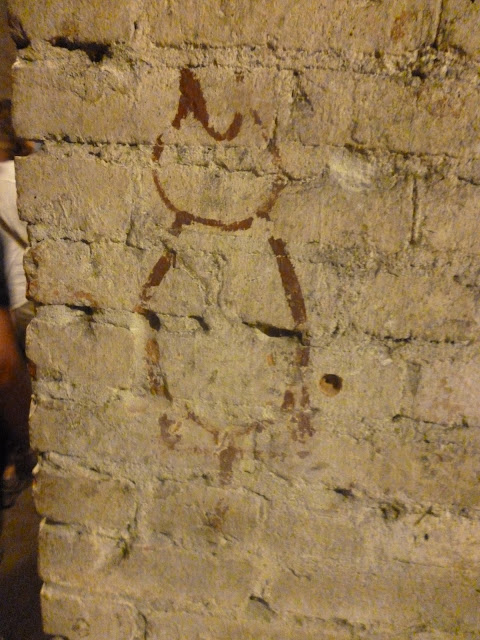 The guide told us this wasn't just a picture of a cat, but a kind of "hobo language" that was used as a way to communicate, especially as most hobos (I think we'd use the term homeless now) couldn't read and write. Our guide told us that a cat was a sign to other hobos that "a nice lady lived here". He didn't really expand on this further, but I guess a nice lady would be someone who would help out people in need. 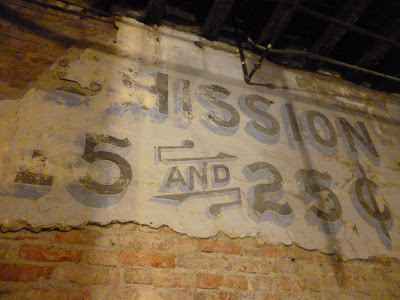 This is an old sign left over from the old city, from a bar/brothel - the guide told us admission would be different depending what you were there for!! 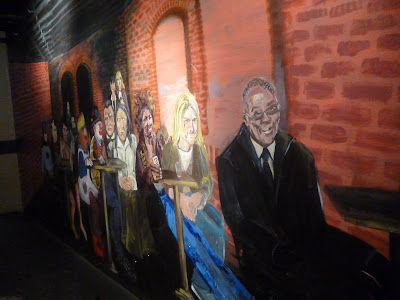 The tour finished up in a comedy club that was located in the underground city, I think its pretty cool that there are parts of the city that are still used for everyday businesses. Our guide told us about a few places where part or all of the business is located in the Underground City - we also visited a very cool toy store that was partially at street level and partially underground.

So did the Underground City tour meet all my childhood expectations - yes and more! Our guide was wonderful and if you want to check out the underground city, Spooked in Seattle is a great company.

After finishing the tour we realised we only had one more "must do" on our Seattle list - visiting the suburb of Fremont.

I'd read a lot of cool stuff about Fremont, but I'm going to be honest guys, I mostly wanted to visit to see the Troll. 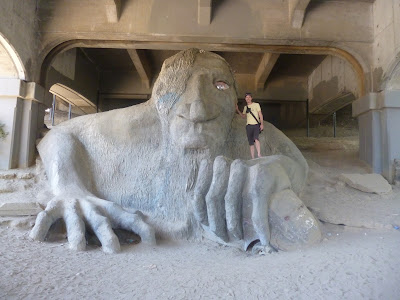 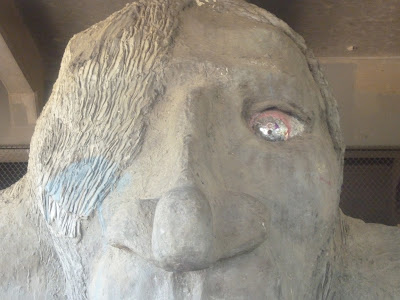 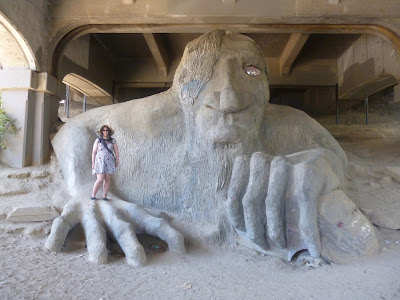 The troll is a public sculpture of a troll under a bridge and as you can see its freaking huge! So much bigger than I expected. I also expected there would be a bunch of other people there when we visited but it was pretty quiet, when we arrived there was a family with a couple of small children and when we left another couple showed up. It's well worth visiting Fremont for the troll alone and its really easy to get here from downtown Seattle by bus. However Fremont isn't all about the troll! 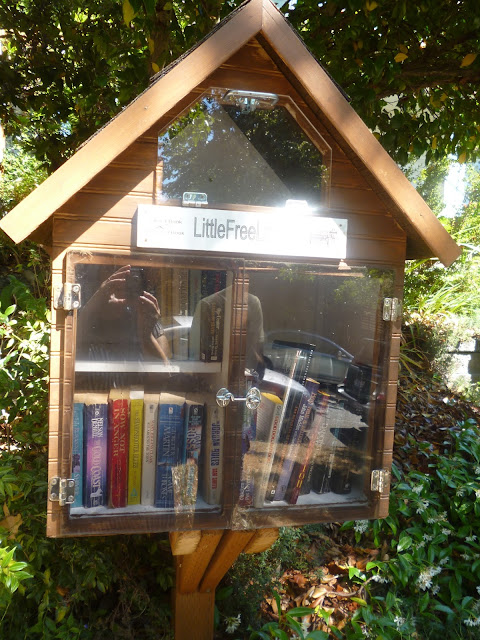 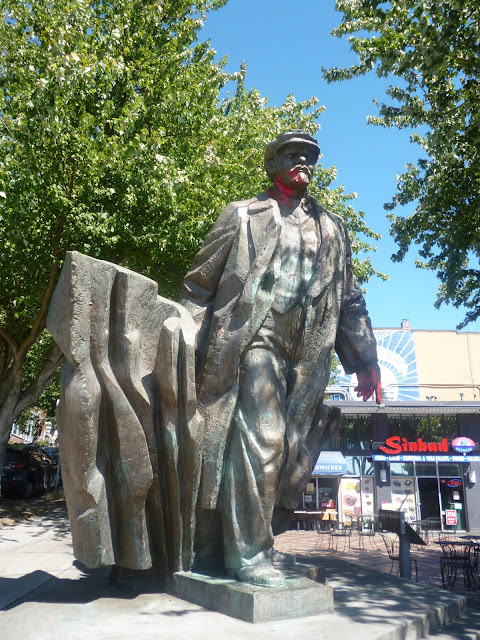 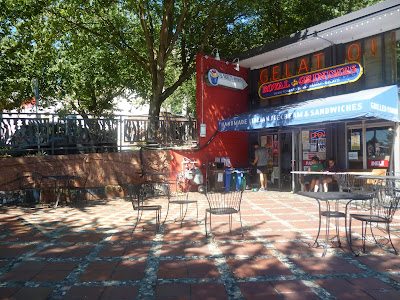 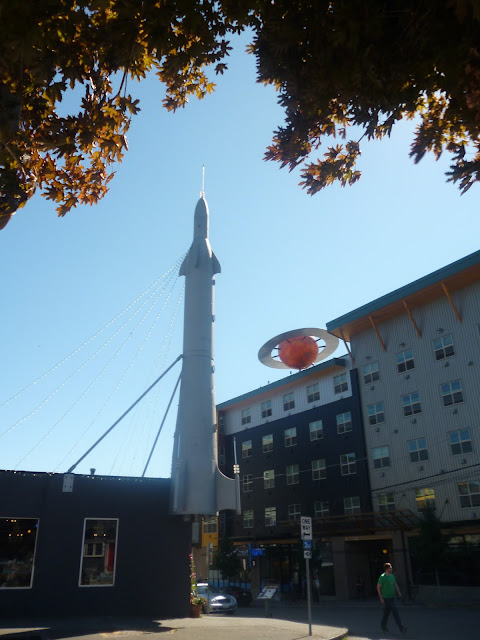 We spent the rest of our afternoon in Fremont which included eating gelato in the sunshine (because that's what holiday should be about), visiting a few of the shops (I found a fabric shop) and seeing a few of the other sites including the Lenin statute and rocket.

That was pretty much the end of our time in Seattle, as we spent our last night relaxing before an early train to Portland. So how did I like Seattle? Well for a city that hadn't really been in my top 10 of places to visit it really surprised me. There was a lot of cool stuff to see and do and many adventures to be had. Next stop after Seattle - Portland!
Posted by Trees at 12:03 pm

I had no idea that Seattle had an underground city, but it sounds really interesting. I loved hearing about it! The giant troll is pretty damn cool! xx

I had no idea that there was an underground city in Seattle, what a cool place to go and explore!