So here's a wee project I've been wanting to share for a while but I've just taken a while to get around to taking a photo.

Basically I bought one of those cheap and choice Chinese style lantern's from Mr Thank You and decided to have some fun with finger paints. I have to admit this may be one of the messiest projects I've ever undertaken and it too quite a while to dry in a Wellington winter (even with the help of the dehumidifier) but it's been sitting in the spare room for a while now looking just dandy.

I decided to call it "that nineties lampshade" as Rich said it looked pretty nineties and to be honest I really could see it on the set of Reality Bites or some other indie movie like that.

I was a teenager in the nineties so maybe I am just reliving my youth? 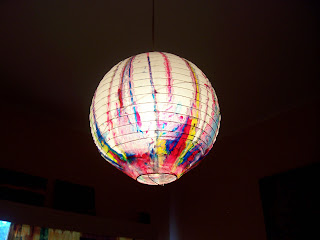