Woken up by roosters yet again!! Seems that this is going to be our standard morning routine whilst in Rarotonga. One of them decides to start crowing and then more and more join in until the whole island is one big rooster party - no chance of sleeping in when you're in Rarotonga as them seem to start at 5am every morning.

This morning we decided to go to Punanga Nui Markets as it was their fresh food and produce morning - these markets are quite big and seem to be a real centre for the community. There was absolutely HEAPS of food there! We arrived at maybe 9:30am and people were already cooking big meals on BBQ's. Cook Islanders seem to eat lots of meat.

We bought some fruit - some banana's (which don't taste as sweet as the ones in NZ), some Guava and some passionfruit (which look very different to the way they do in NZ! They are much bigger and green rather than being black/purple and kinda shrivelled up looking). I also bought "Banana pudding in coconut cream" which came in a plastic container.

The markets were very cool and I'm really looking forward to going back on Wednesday for the art and craft markets, it will be interesting to see if there are many different stalls. But if not that's ok as there were heaps of craft stalls today that I'm keen to take another look at and pick up some cool things.

After the markets we went and rented some bikes for our adventure out to Muri beach. I hadn't been on a bike for years so found it a little difficult to start with (the last time I was on a bike I would have been about 15!) but slowly got used to it. Because I wasn't that confident on the bike Rich thought it would be better to take the back roads. This was pretty cool as it wasn't focused on tourists like the main road on the Island, so it was good to see some 'real life' Rarotonga. I liked seeing the crops growing - especially the banana's! 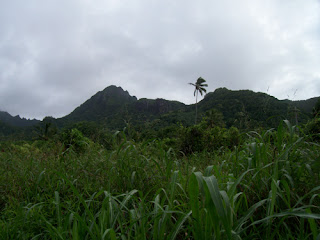 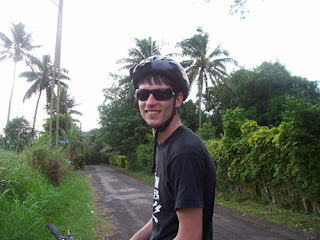 When we finally arrived at Muri Beach it was stunning - the sun had finally come out and the water was so clear. Rich and I hired some snorkling gear - I'd never been snorkling before but it was pretty easy once you got used to breathing out of the snorkling tube (I'm sure there is a technical term for the tube). The guy that we rented the snorkling gear from told us to head to an island not far from shore as there was good snorkling to be had there.

We headed out to the Island but didn't see much to start with apart from sea cucumbers and rocks. But then we came across so many different types of fish it was amazing! They were in so many different colours and sizes. Some go into a panic and swim away as soon as they see you and others you feel like you could almost reach out and touch as they don't even seem to notice you're there! 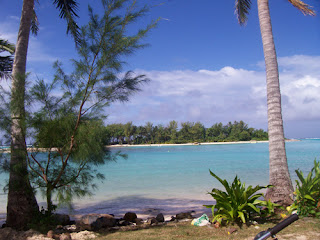 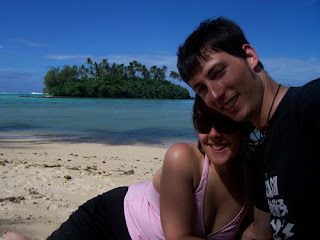 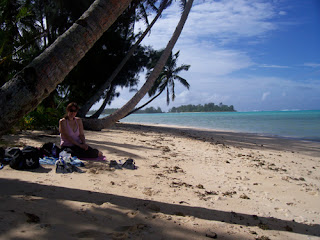 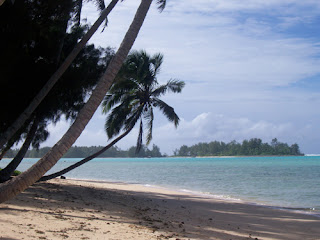 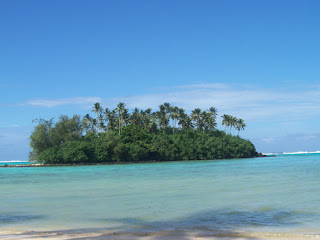 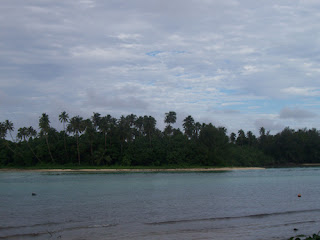 After we finished snorkling we headed back to Avarua and stopped for an ice cream on the way home.

In the evening I really wanted to go to "Trader Jacks" for dinner - but we couldn't get a table. Turns out it's one of those places you really need to make a reservation for. There didn't seem to be a lot of other restaurants open in town - a lot of the cafe's are only open during the day so we ended up going to this little Chinese place for dinner. It was really a nice place though - the food was good with lots of veges.
After dinner we decided just to go for a wee walk around town and then came back to the motel to sit on the deck for a while and enjoy the nice warm evening.
Posted by Trees at 5:02 pm

The raw fish is 'cooked' by being soaked in lemon juice. It is then combined with coconut cream and a few other things. If you like fish, its not half bad.