Today we woke to the sound of rooster crowing - but thankfully NO RAIN! So we could actually get out and about and do something.
We left the motel quite early on our bikes determined to cycle around the whole island and stop for a spot of snorkeling on the way as Rich had read about "The best place for snorkeling in Rarotonga" in the Lonely Planet guide.
On our way around the island our first stop was a small road side stand selling carved souvenirs - they were selling some of the same stuff we had seen in town but we decided to buy a wee carved figure anyways.
We hoped back on our bikes and cycled some more until we reached "wigmore's waterfall" which is the only waterfall on the Island. To get there we had to cycle past a half constructed resort/hotel, which was quite creepy - apparently construction began, began and then something went wrong and now all the half finished buildings are abandoned.
We cycled up a dirt road to see the waterfall which was pretty cool but we only stayed a very short time as there were mosquito's everywhere! I've never seen so many mosquito's in one place before. 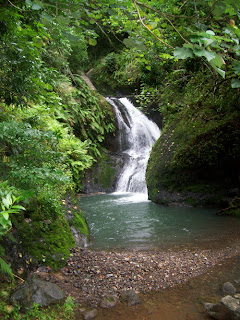 Once escaping the mosquito's and getting back on the main road again we cycled for a while before reaching "Fruits of Rarotonga" - this has to be my favourite food place in Rarotonga! It's a simple roadside stand that serves morning/afternoon tea (Rich and I had fruit smoothies and muffins), sells jam and chutney and also rents snorkeling gear - because it is across the road from the best snorkeling spot in Rarotonga.

After finishing our muffins and smoothies we hired some snorkeling gear and went to check out the sea life. I really liked snorkeling at Muri beach but snorkeling here was even better - we had whole schools of fish swimming around us, plus we saw a blue starfish and even more types of fish. After finishing up snorkeling we got all dried and headed back on the road again. 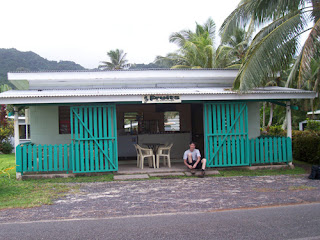 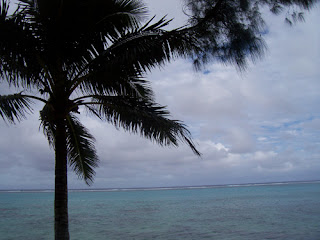 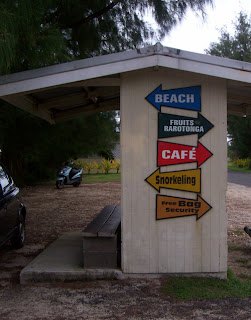 On the way back to the motel we visited the spot where the 7 waka's left the Cook Islands to come to New Zealand, which wasn't particularly well sign posted considering how many kiwi's holiday in the Cook Islands.

At the site there was a kind of memorial and each waka was represented by a stone and a plaque. Some people had left coins on some of the plaques, I'm not really sure why, maybe to give the people of that waka good luck? After checking out the sites and taking some photo's we were back on our bikes again. 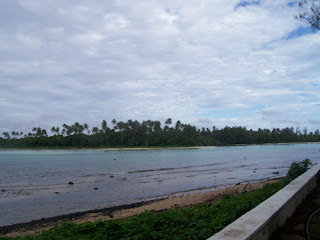 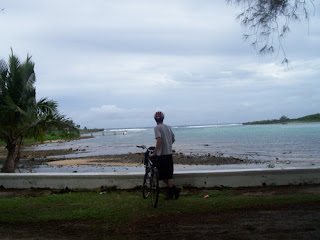 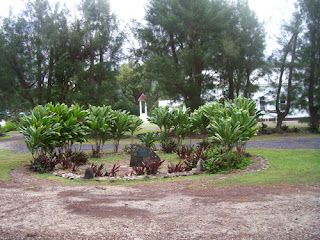 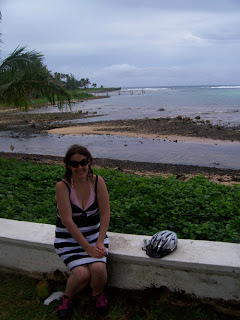 One thing I have noticed whilst in Rarotonga is that there are a huge number of churches, Rich and I decided to stop at one of these churches and take a few photo's. Just because it was an interesting building. 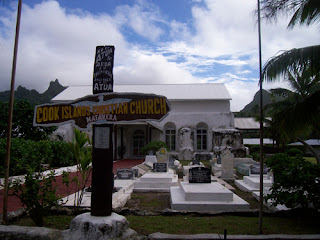 After stopping to check out the church we began the final leg of the journey and headed back to the motel. We managed to cycle 32km around Rarotonga - pretty good for a girl who had not been on a bike for over 10 years:)

When we arrived home decided to have a bit of a rest - all that cycling and snorkeling does make you a bit tired.

We decided we wanted to have something nice to eat for dinner - but it was Queen's birthday Monday in Rarotonga as well and there was not a lot open.

We ended up at an Indian place called Raviz. The food was nice but I couldn't help thinking that since we had been in Rarotonga we had eaten Italian, Chinese and Indian but no Cook Island food.

Because we finally had a clear night we decided that we would spend some time on the deck of the motel star gazing - which was very cool as all the stars in the sky were so bright and you could see Venus clearly - so beautiful!