As per usual we woke up to the sound of our friends the roosters crowing - I REALLY won't miss wild chickens and roosters when I leave Raro.
We decided today we wanted to do something "cultural" so we decided to head to a place called "Highland Paradise".
We left the motel relatively early to drop off our bikes - I was a little sad to say goodbye to them after having them for 3 days. I guess I won't have the chance to cycle again for some time given Wellington roads are so hilly and narrow and the drivers so crazy!
After dropping our bikes off we waited at "Cooks Corner"to be picked up from someone from Highland Paradise. When I rang to book the tour I was told that someone would pick us up between 9:30 and 10:30 - so we were a bit worried about being picked up at all.
Finally a mini-van arrived from Highland Paradise with our guide/owner Tutu who was a really interesting woman - she had gone to school at Auckland Girls Grammar, done a degree at Canterbury and worked in Sydney for some years before before returning to the Cook Islands about 5 years ago when her father was sick with Cancer. After her father passed there were some family "issues" and Highland Paradise was closed for about 3 years, but she had recently re-opened it.
I think I learnt more from Tutu about Rarotonga in about half an hour that I did from anything else I had read about the Cook Islands. She told us that there was a Queen on one part of Rarotonga (her area can be identified by these small white fences in front of the properties in her area) and the other part of the Island is ruled by a council of chiefs - although one of the seats has been empty for some time as there is some fighting over who should take up the seat.
She also explained that there really arn't any laws in regard to what you can do with your land - that's why there are so many gravesites - because people are allowed to bury their relatives in their backgarden if they want to as there are no laws in regard to the use of the land.
When we actually arrived at Highland Paradise we sat down and Tutu gave us a bit of a history of the area and Rarotonga in general. She told us that before the missionaries arrived Rarotonga was a tribal society and there was a lot of violence as the tribes fought each other. Her people lived on the site where Highland Paradise now stands to protect themselves in times of war.
She also told us that when the missionaries came to Rarotonga much of the Cook Islands history was lost as it was an oral history and it only took 5 years from the intial arrival of the missionaries before everyone in the Cook Islands were converted to Christianity.
After our discussion with Tutu another guide took us around the "mountain" to see the gardens and the site of an old villiage (although apparently the villiage is actually 1.5 km further up the mountain). 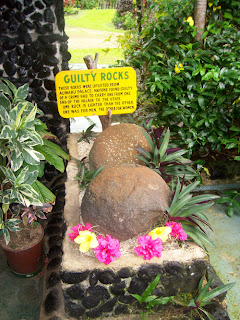 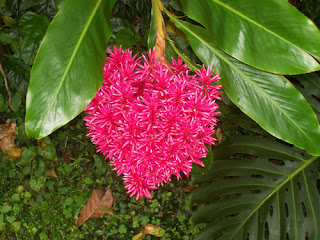 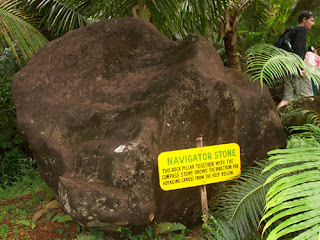 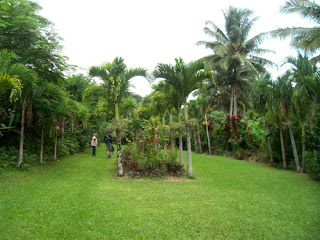 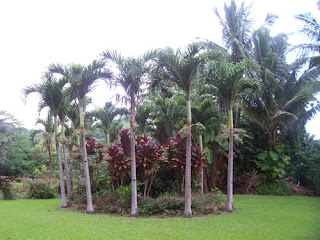 Our guide was really fantastic and showed us a lot of different tropical plants which was really interesting. One of the plants she showed us was the "Starfruit" - I'd had a starfruit in a cocktail earlier in the week but I had just eaten one, they are really delicious. Our guide picked a whole lot of starfruit for us a even weaved a basket for us to take them home in. 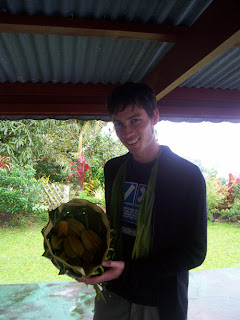 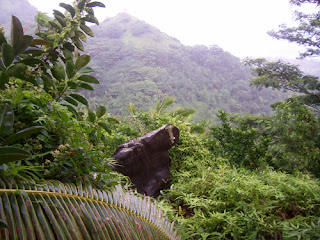 She also showed us the site of the "village" which included a whole lot of really big boulders/rocks.

When we returned back to the building where we began our toue we found the most beautiful and huge lunch waiting for us - finally some Cook Island food! We had some potato salad, taro, paw paw salad, beautiful fish and a tropical fruit platter for dessert - it was delicious! 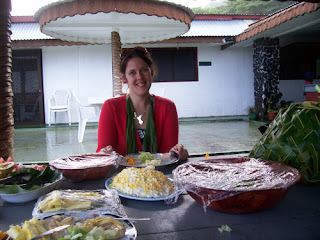 We ate our lunch whilst overlooking the view from Highland Paradise which was incredible. 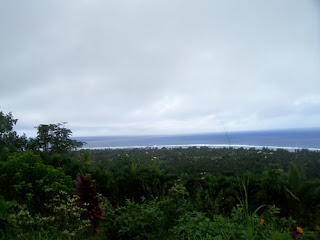 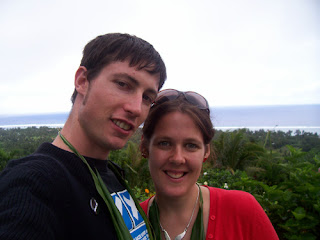 After lunch Tutu gave us a lift back to our motel and some more insight into Island life.

When we returned to the motel we decided it was time to chill-lax for a while. Tutu had sent us home with a whole lot of leftovers from our lunch so we decided that we should buy some fresh fish to eat with all our salads.

This was a much bigger task than we thought as it seems that in the Cook Islands the supermarkets don't sell fish! So we walked and walked and walked and finally found a fish shop - but it was worth it - fresh fish in Rarotonga is SO cheap. We bought to huge fillets of albacore tuna for $3.50!

By the time we returned to the motel it was nearly time to cook dinner. We bought an onion on the way home and Rich cooked the fish beautifully.

We decided to spend the rest of the night just hanging about the motel - but I would recommend Highland Paradise to anyone going to Rarotonga.