We woke to roosters crowing - I think I am actually starting to get used to roosters crowing - I guess it's a bit like when you move into a flat next to a busy road, to start with you think you will never sleep again but you gradually get used to it. I guess that's how Cook Islands handle living with the wild roosters!
Today was the day we were meant to be going to the art and craft market, however, when we got there we found the markets were dead. We talked to one of the stall holders that was actually there who saw us walking around looking rather lost, she told us that not many people come to the markets during the week - most people come on Saturday's. I guess this is a lesson - don't trust a 3 year old lonely planet guide!
However, she told us if we came back about 12 something might be happening. So we were now at a loss as to what to do for the rest of the morning.
Rich thought it would be a good idea to spend the morning at Muri Beach again and then come back to Avarua and see if anything is happening at the markets. Rich had especially wanted to go to the markets as he had his eye on a Rarotongan ukulele and the cheapest place to buy one was at the markets.
We went back to the motel and got all sorted for the beach - when we arrived at Muri beach it was surprisingly quiet even though it was 10 in the morning. Whilst walking along the beach we noticed a guy renting out sea kayaks and other water sports equipment.
We were standing on the shore deciding whether to rent a kayak or not when he started waving at us to come over and talk to him, so we decided to go over and rent a kayak - after all - it's not everyday you get to kayak at Muri Beach!
The guy we rented the kayak's from was really hard case. He told us the best places to kayak and also where to snorkel - so we hired some snorkeling gear as well.
First of all we kayaked around one of the islands off Muri Beach which was really hard work! Kayaking is so good for your arm muscles! I got pretty wet whilst Kayaking because I was sitting in the front but that's ok because it was so warm it didn't matter too much.
We kayaked around one Island and then decided to head for another - the second Island we arrived at was the same Island we had our first snorkeling adventures at. The guy we hired the gear from said that the best snorkeling in Rarotonga was around the back of the Island. However, it was pretty difficult to get to the back of the Island in the Kayak as the water was so shallow and rocky. But finally we managed to get the kayak onto the shore - this wasn't very easy!
When we got out of the Kayak it turned out I had been given a dud snorkel set as my mouth piece kept on filling up with water as the tube wasn't long enough for the set (maybe it was a kiddies one?) and no matter how shallow I swam I ended up with a mouth full of sea water. Rich offered me his set for a while so I could do some snorkeling. It was pretty good snorkeling but I still think the spot opposite fruits of Rarotonga was better. Although we did see quite a few big fish out at this spot.
After a while we decided to return to the original Island we kayaked around as it had a nice beach - we thought we would hang out there for a bit because it was sandy not rocky. We paddled the kayak up onto the beach and the water was so clear we could already see some fish. Rich offered me his snorkel set to use and said he'd use my dodgy one and just hold his breath when he was under the water.
Even though this wasn't a rocky beach at all there were still quite a lot of fish about - most of them were around a tree which had fallen into the ocean at some stage. 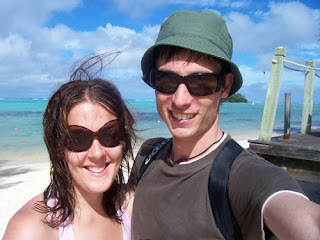 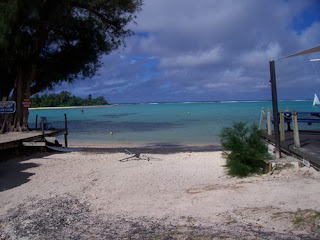 After all of our sea kayaking and snorkeling we were VERY hungry and found a very cute cafe at Muri Village called "Deli-licious" it was a really cute cafe with a really "trendy" vibe. This cafe would not have been out of place in Cuba Street!

After lunch we returned back into town, by the time we got to the markets it was about 3pm - we saw the same lady again when we arrived and she called out to us and told a few things happened at the markets at about 12 but most people had gone home already! I decided to buy one of her beautiful shell necklaces - so I bought something from the markets that day.

After we left the markets we decided to have a look through the tourist shops to see if we could find Rich's ukulele at a reasonable price - but the cheapest tourist shop still cost a good $20 more than the markets.

We finally headed back to the motel to hang out for a bit before heading to "Trader Jacks" at 7 for dinner. Trader Jacks came across as being a bit of an Rarotongan Icon - but to be honest - I didn't really like it that much. The meals were nice enough but it was one of those places where you felt like you couldn't really relax as they were trying to get as many people through the doors of the restaurant in one night as possible. It felt like they were trying to take your plate away before you really had a chance to finish you meal - which was disappointing. There are much nicer places to eat in Rarotonga than this.

When we finally got home we were exhausted from kayaking, snorkeling and walking but decided we better pack up a bit as the unit looked like a bit of a bombsite and we were leaving tomorrow!
Posted by Trees at 12:56 pm