Rarotonga - Day 1 - we arrive in Avarua

My first entry is 1st June/31st May as we are leaving Auckland on Friday but arriving in Rarotonga on Thursday. The day started 'ok' - we woke up at an unnaturally early hour to get to the airport at 6 to board our plane to Auckland. However, this was slightly stressful as when we were waiting in the departure lounge to be called to our flight to Auckland we were told that we may not be able to land in Auckland due to fog! As you can imagine this was a wee bit stressful....we boarded the plane but were told a couple more times by the pilot that we may not be able to land in Auckland but everything should be 'ok' - so when we did finally did land in Auckland it was a relief - in fact - I've never been so happy to be in Auckland! The boarding of our international flight to Avarua was pretty painless and we even got our "breakfast" (it was breakfast food but by the time we got it we had already been awake for hours and had breakfast ages ago) before everyone else as Jess ordered us a special vegetarian meal - yah Jess! When we finally arrived in the Cook Islands, the airport was really small and almost exclusively designed to deal with tourists - but I was kind of expecting that. We found the bus to our motel and then headed off to the "Paradise Inn" - we were greeted with a sign which said Kia Orana and told us we were in room 11. 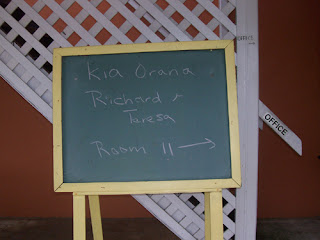 But there already was somebody in room all and no-one at reception and no bell to ring - as we pondered what to do new someone else staying at the motel told us that if we want to see the managers go into the guest lounge at the back and beat the drum and someone will come down the stairs and help us out. So we went and beat the drum and one of the managers came down the stairs accompanied by her dog Anton (there are also 3 cats living at the motel!). She actually put us into Room 10 not 11, and then a short while later she returned to tell us we weren't actually in Room 11 or 10 but 9! Phew! After finally settling in we decided to go and have a look around Avarua - by this stage most of the town was shut as it was about 4:30. But most of the restaurants, cafes and bars were still open. I've noticed so many little superette/dairy type places here - it's crazy - they seem to be everywhere! I also can't help but notice the crazy amount of motorbikes/scooters on the road. Absolutely everybody seems to drive them - all in jandels with no helmets, I've also seem a few small trucks with a whole bunch of people sitting on the back. But it's all pretty safe as everyone drives pretty slow compared to New Zealand. On the way back to the motel we decided to buy some milk and a few other things, so we stopped at "Foodland". I had heard from a couple of people that food was expensive in Rarotonga but I didn't realise just how expensive!! Being a farmers daughter you can imagine my shock when it cost us NZ $13 for a 2 litre of milk. Makes New World Metro look like an absolute bargin! All the fresh produce seems to be imported from New Zealand as well - so it's also very expensive - it cost $7 for half a head of cauliflour and feijoa's and kiwifruit were about $11 a kilo. Unfortunatly the only food that wasn't crazy expensive was the rubbish food like chocolate bars, chips, ice cream..I guess it's because that sort of food keeps for such a long time. I don't even know how people afford to feed their families when fresh food is so expensive. I guess maybe they buy a lot of food at the local markets? After we had been shopping we were both feeling pretty tired so decided to have a nice dinner out and then have an early night. We went to a place just down the road from the motel called "Portifino" - This is seriously one of the best restaurants I've been to for ages. It was owned by a Canadian couple and the service and food was really good. Rich had a pizza and I had a "garden of eden" salad which had prawns and chicken....mmmm... Maybe we will go there again before we leave to go home. After dinner pretty much just went home exhaused! Amazing how tired travelling makes you even though you spend most of the time just sitting around. 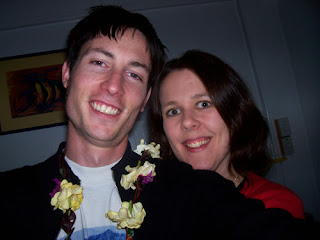