It's time for Me Made May week two! I'm actually surprised at how many "me made" items I have in my wardrobe. I haven't worn the same item twice yet.

However, I do now for sure pretty much all I seem to make are skirts and tops - I really need to make more tops and cardis.

Here's what I wore for week two: 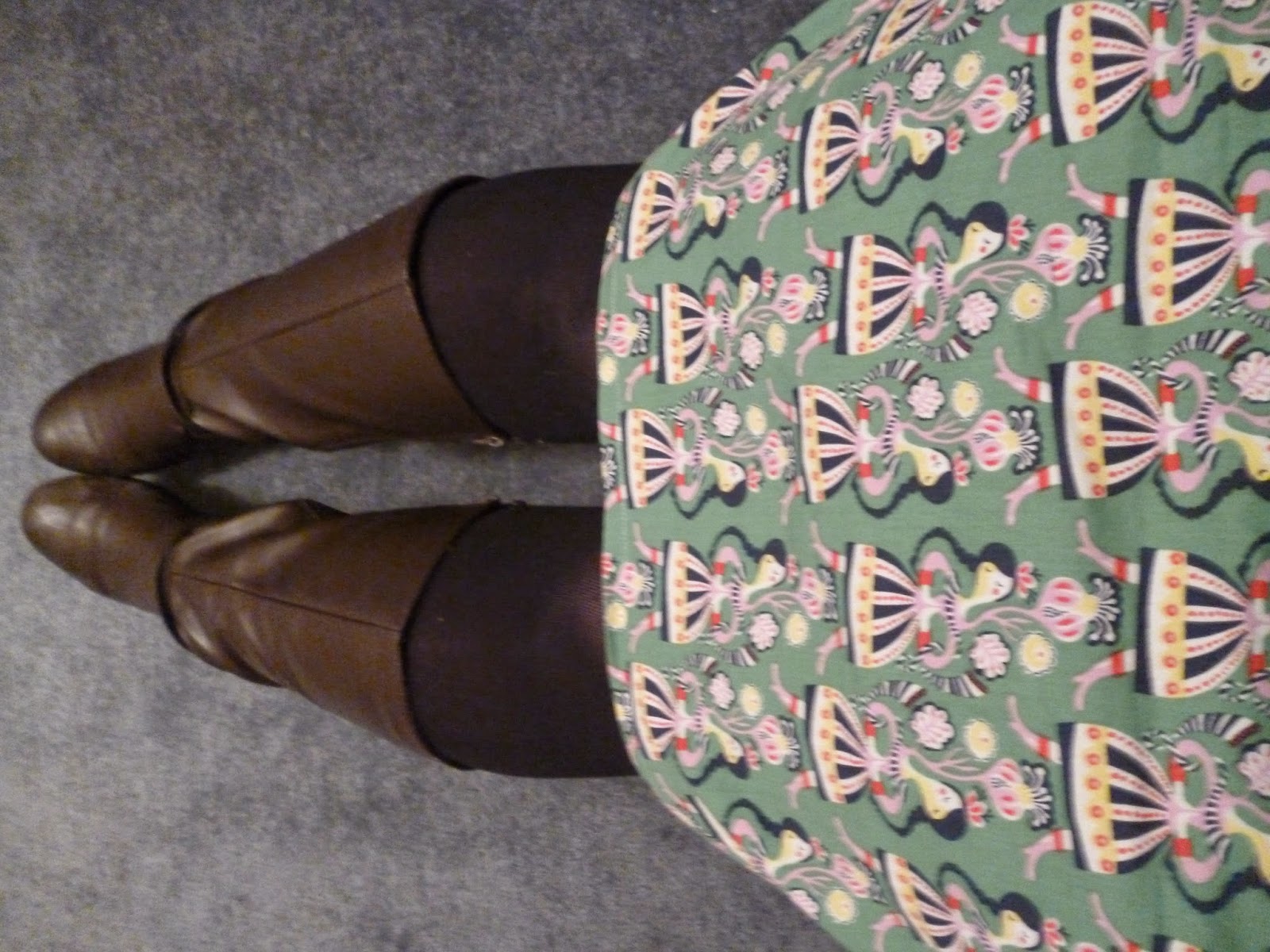 My usual photographer (Rich) was busy finishing up an assignment for university, so I didn't get a full length photo. But I did capture the part of the outfit I made myself - which is what counts!

Made by Me - A-line Skirt

Other stuff - tights from who knows where? and boots from Avon 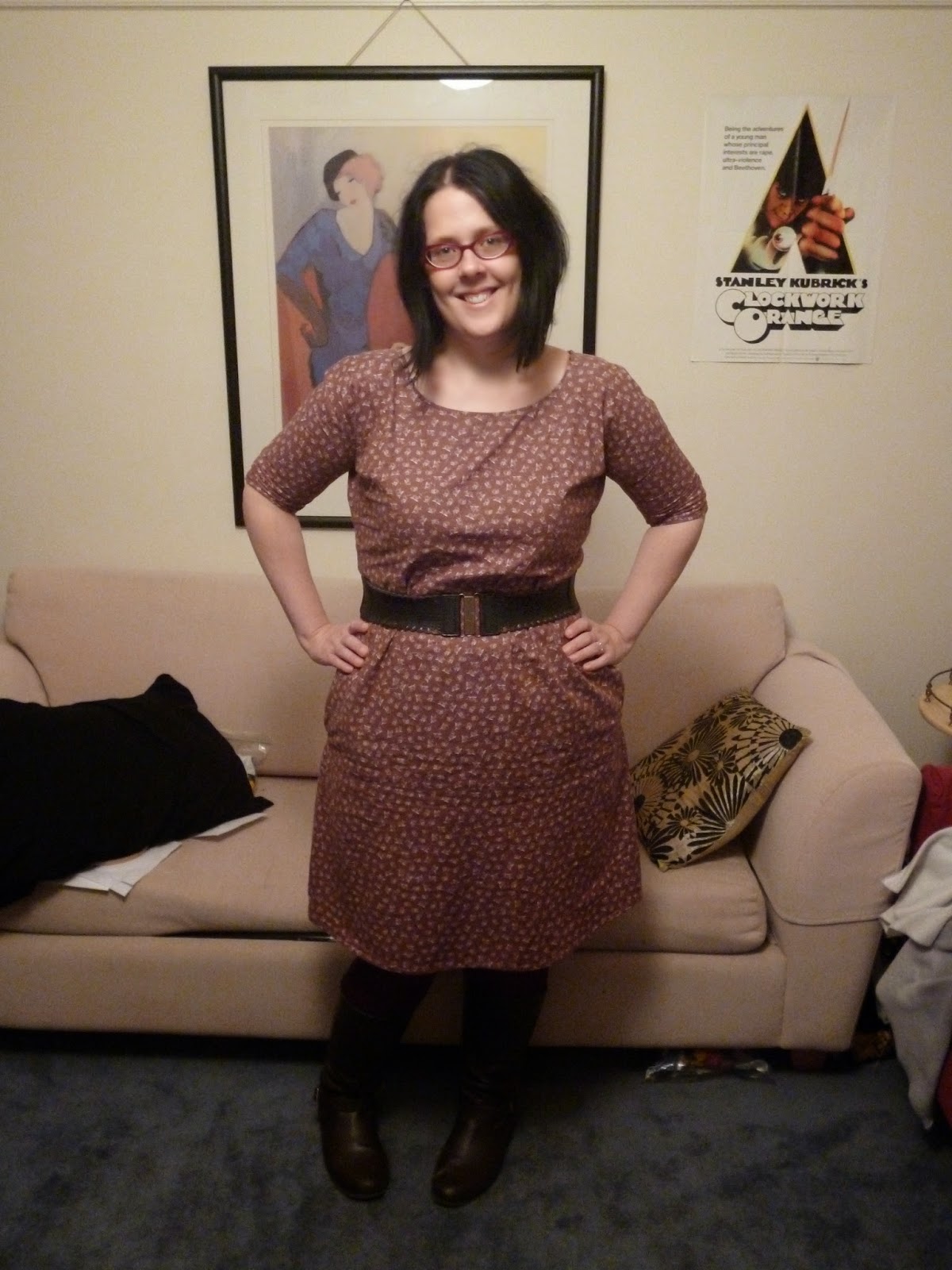 Other stuff - tights from who knows where, belt from The Warehouse and boots from Avon 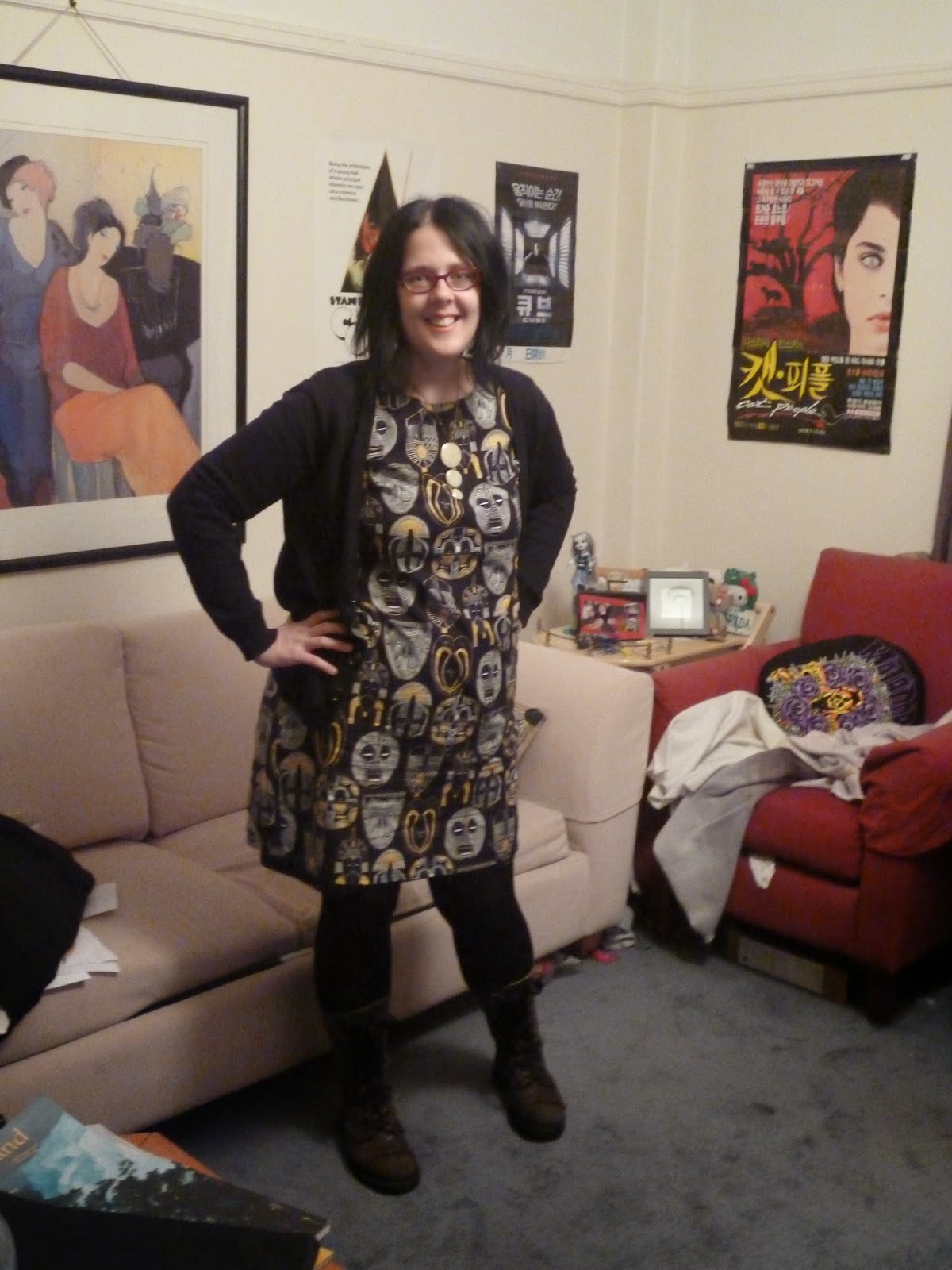 This appears to be the day of the extremely awkward pose.

Made by Me - Laurel Mask Dress

Other stuff - tights from who knows where, necklace from David White Gallery, Cardi used to belong to Rich and boots from Korea 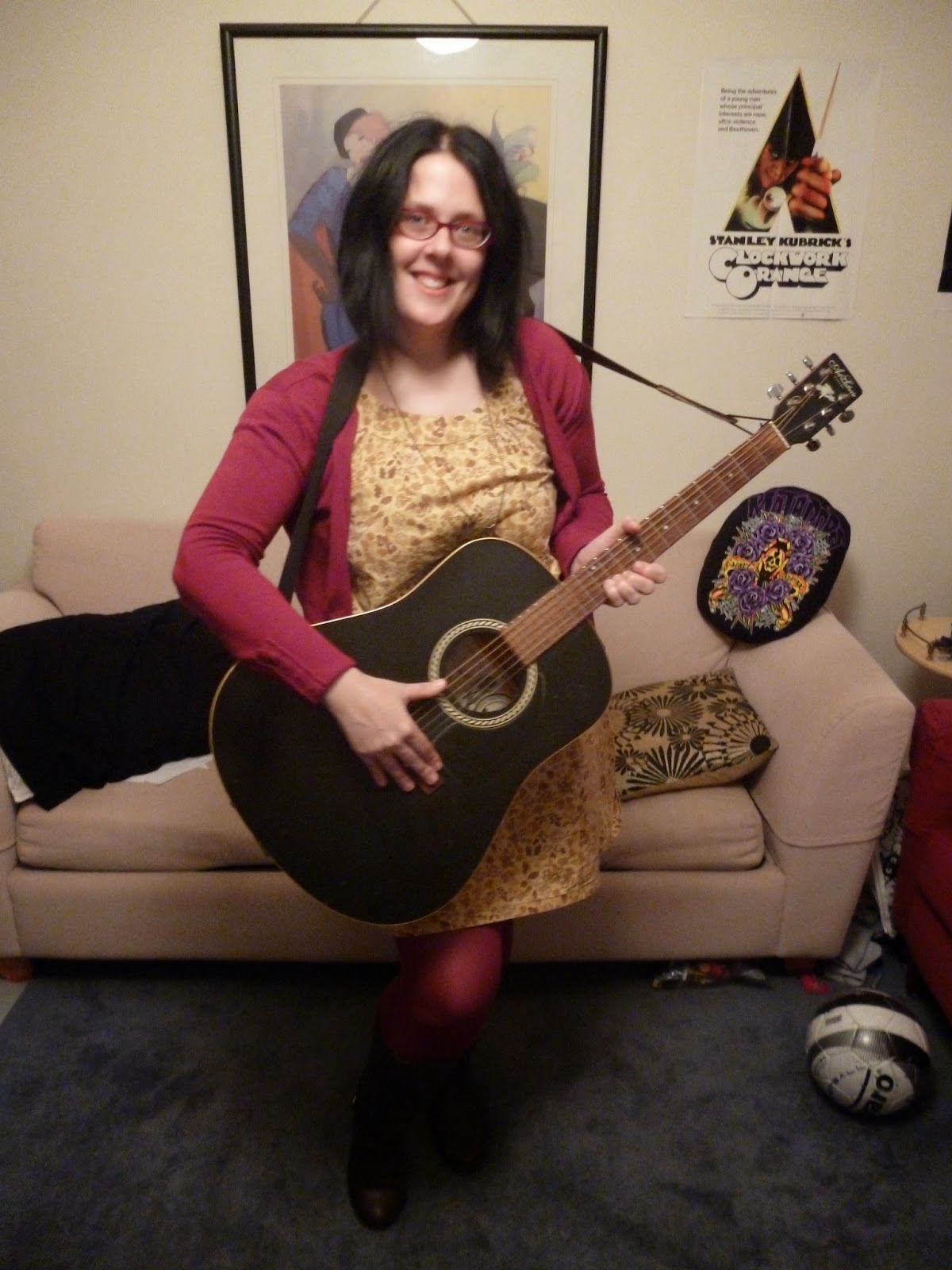 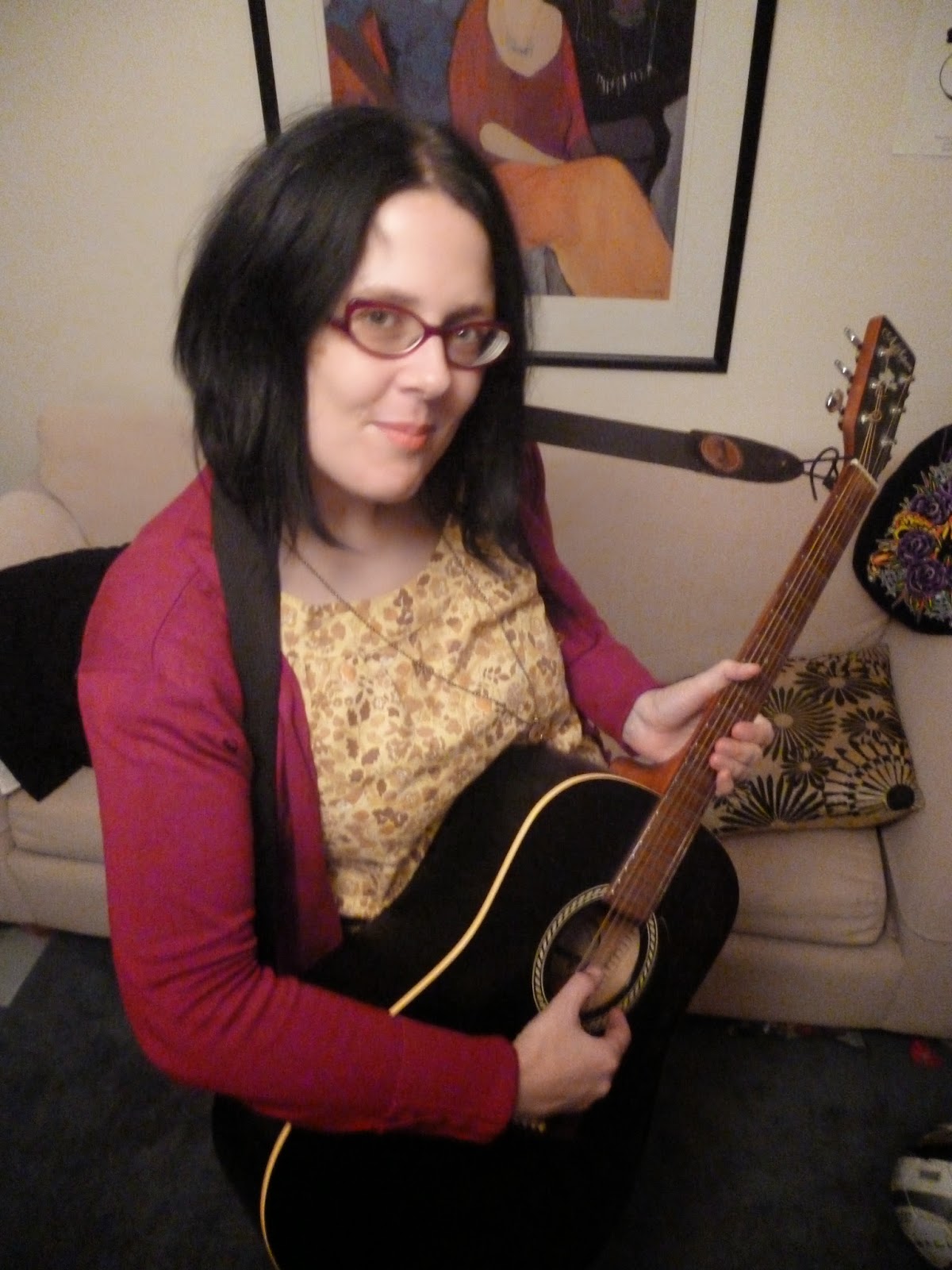 The day we decided it was a good idea for me to pose with the guitar and look like some kind of  country singer songwriter. In case you're wondering, I can't play the guitar. Rich however has played guitar since he was a teenager and tired to teach me once about 10 years ago - but I lost interest in about five minutes.

Made by Me - Autumnal Dress

Other stuff - Cardi and tights from glassons, boots from avon and necklace from Korea 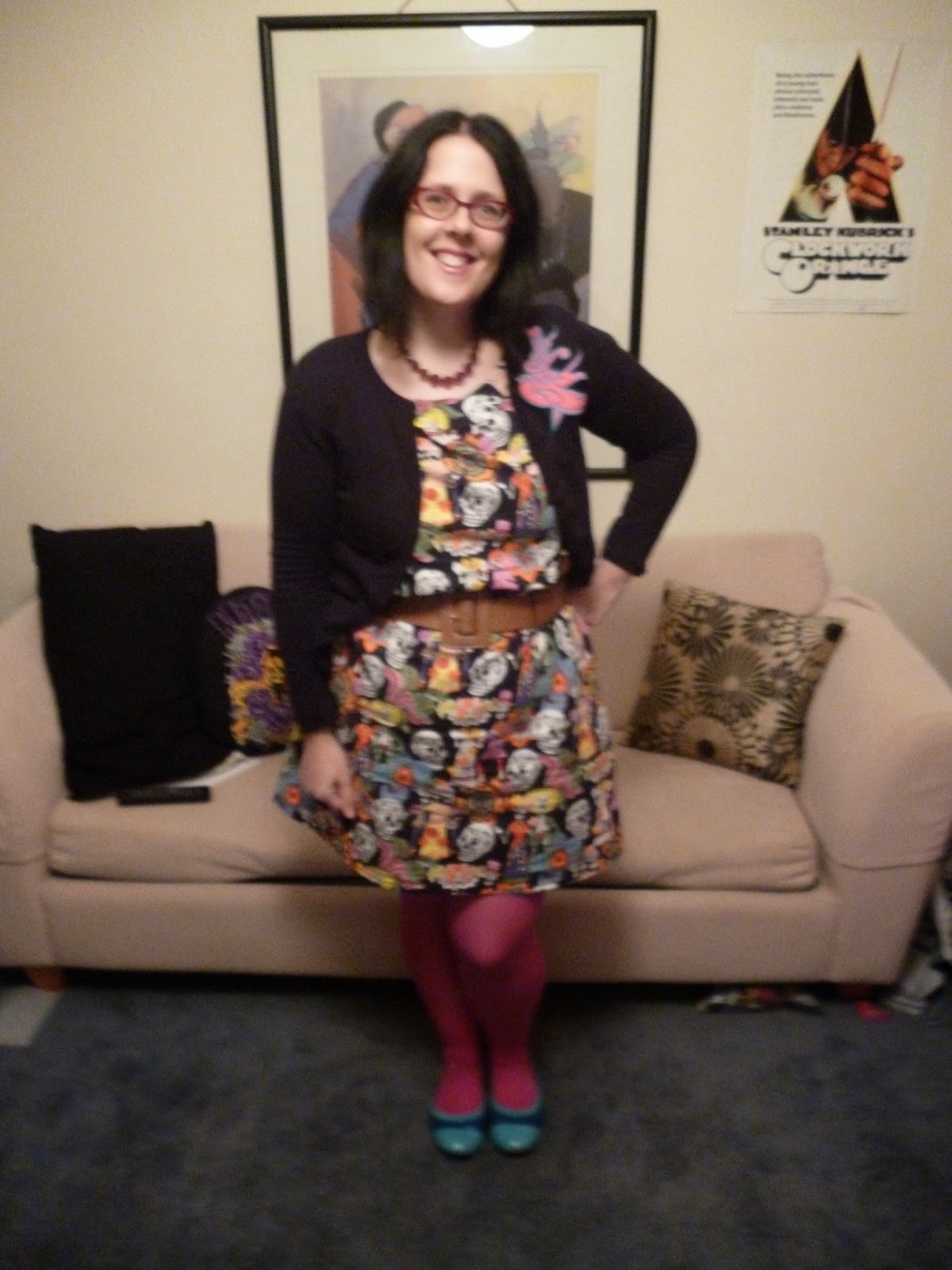 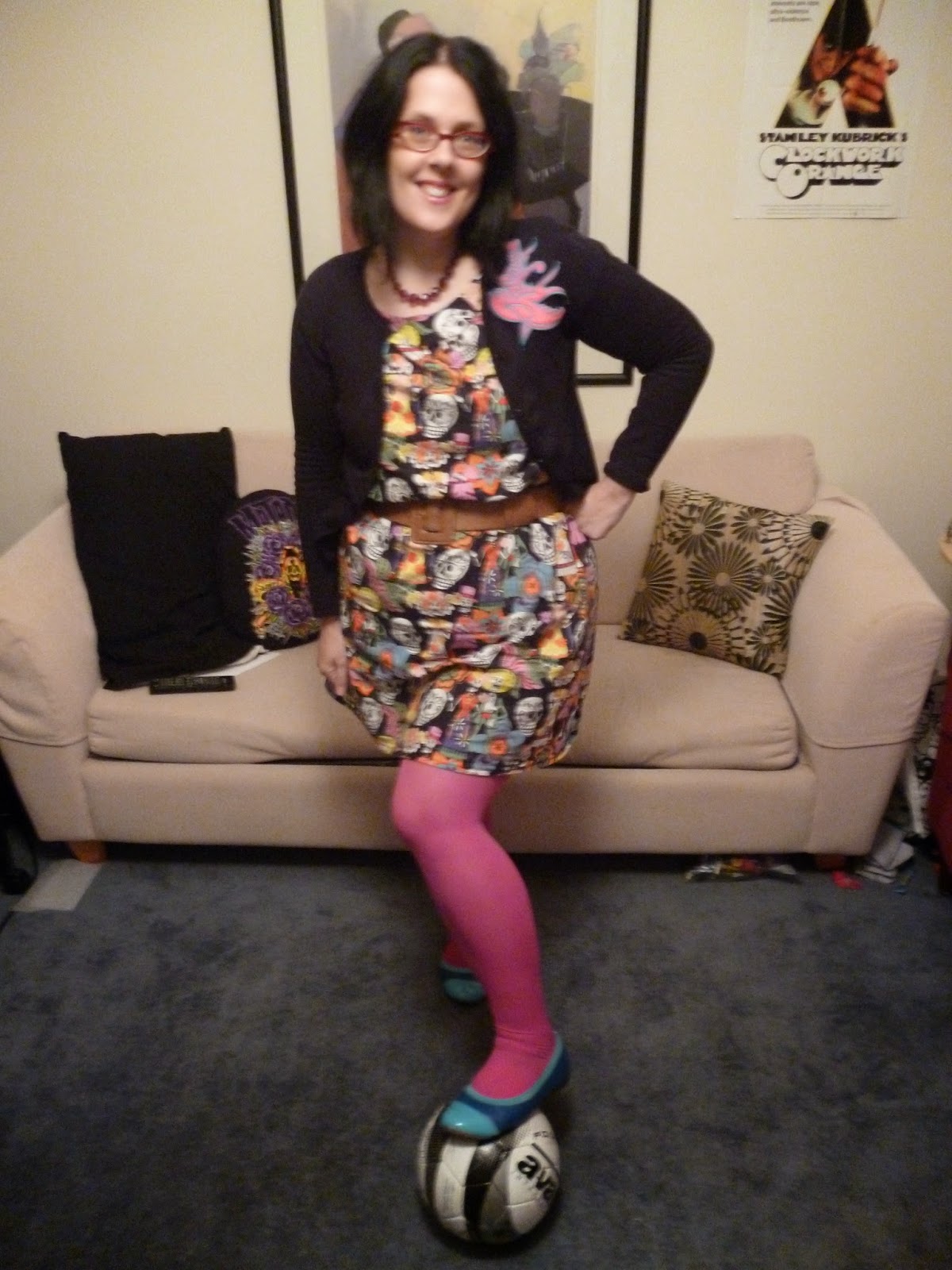 The day we decided I should pose like a total geek with Rich's football - you can see how awesome these shoes actually are!

Made by Me - Meg Dress

Other stuff - Cardi from Illicit Clothing Aotearoa, beads from op shop, belt from clothes swap, tights from I'm not sure and shoes from Avon. 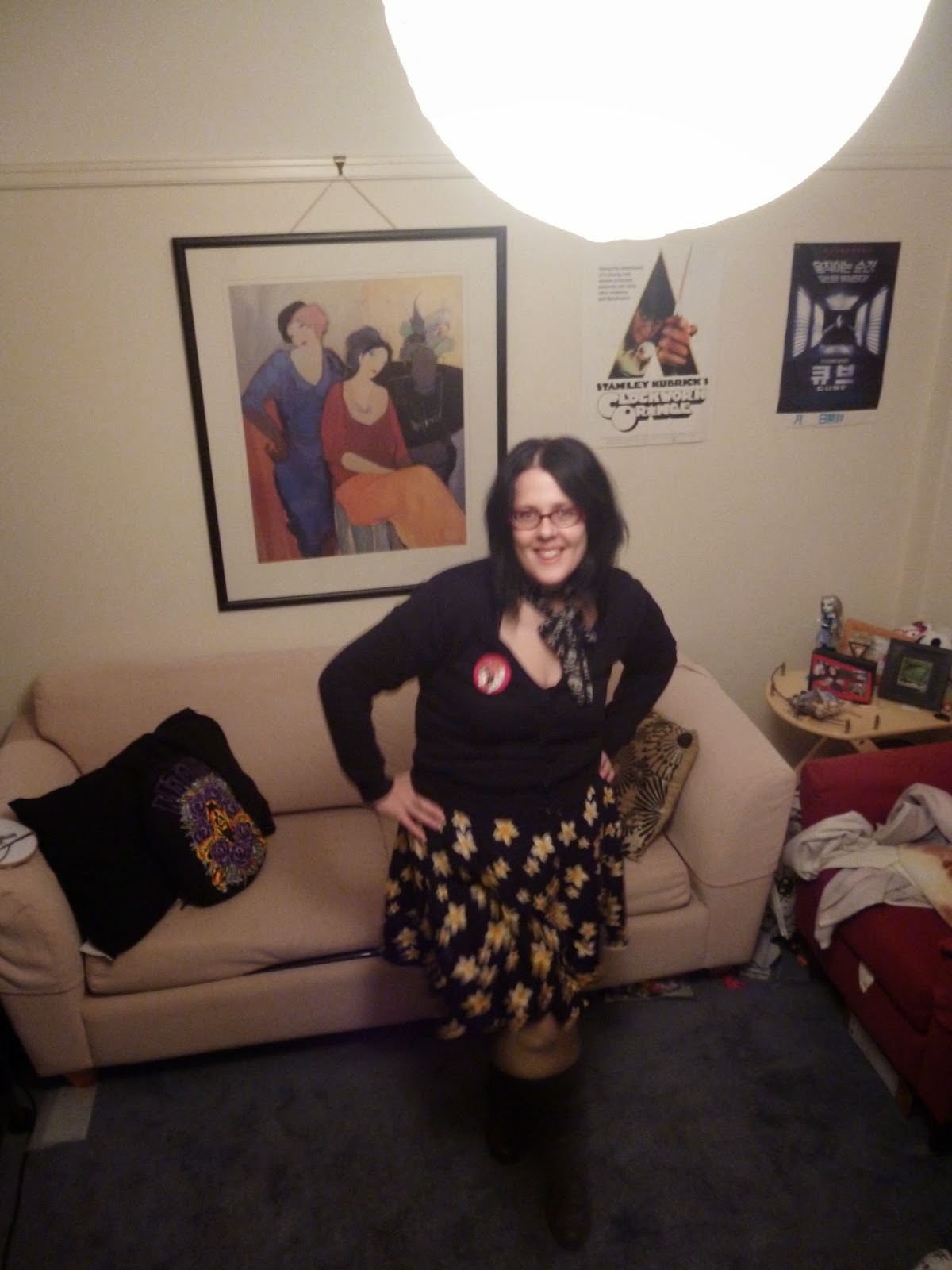 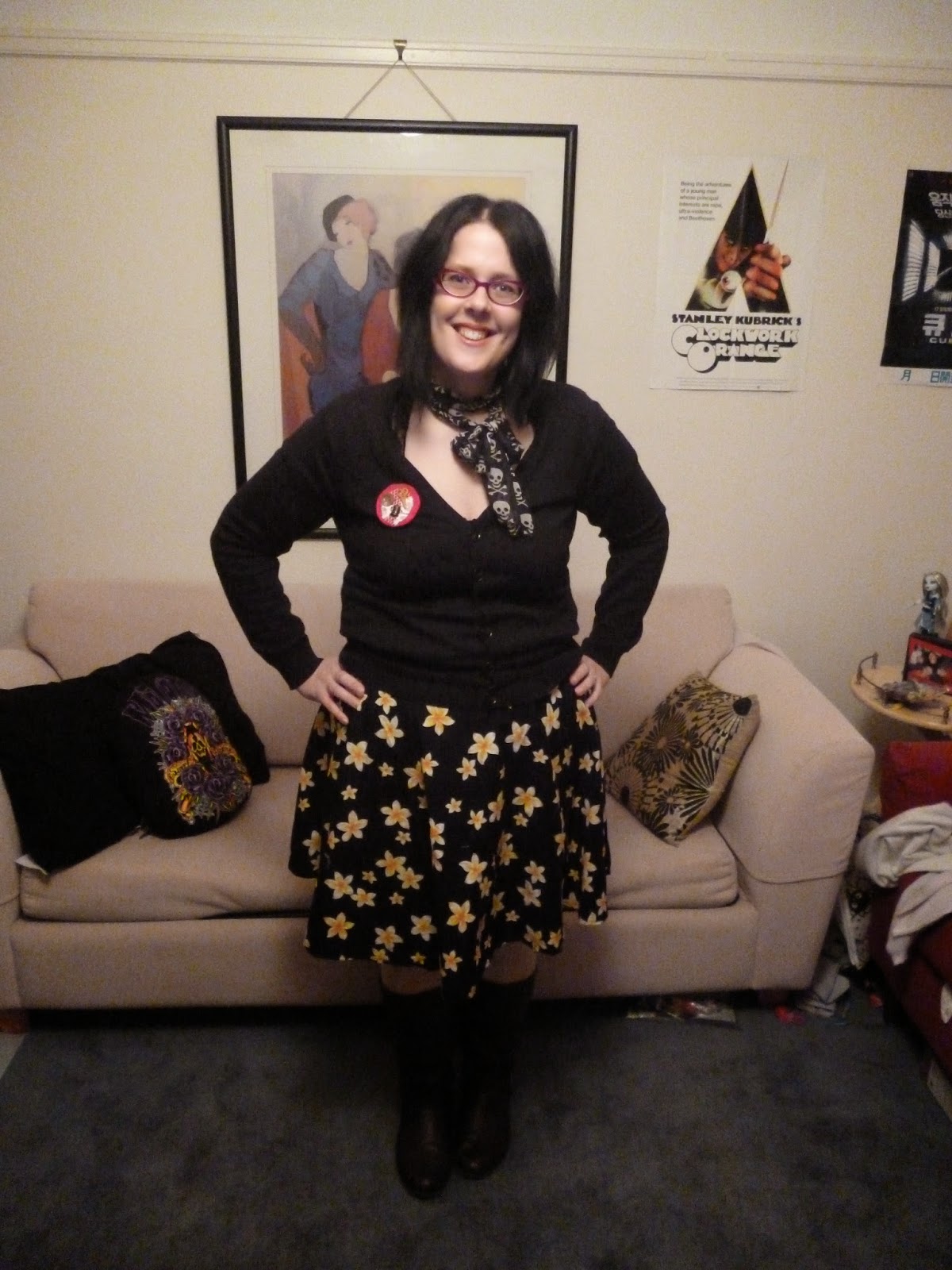 Made by Me - Tropical Skirt

Other stuff - Scarf  and tights from Equip, Cardi used to belong to Rich, Brooch a gift from Rich and boots from Avon 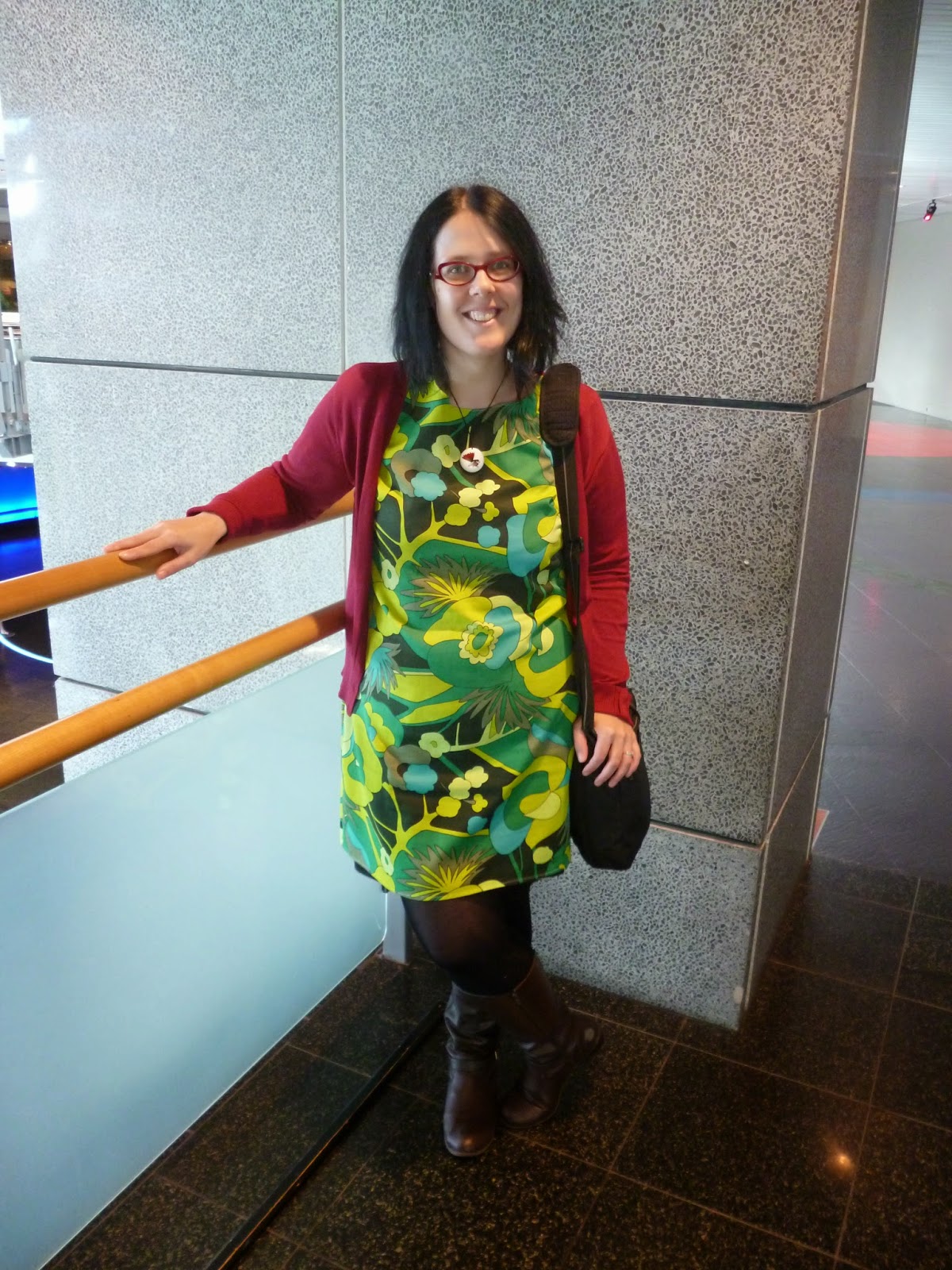 Made by Me - Laurel Dress

Other stuff - Cardi from glassons, necklace a gift from Rich, tights who knows and boots from Avon

I wore today's Me Made outfit to Te Papa as Rich I went to check out two exhibitions they currently have displayed about China - Throne of  Emperor and Shi Lu: A revolution in paint.

If you are in Wellington you should totally go and check them out as they are both amazing. In celebration of the Chinese exhibitions Te Papa had some pretty Chinese Lanterns on display. 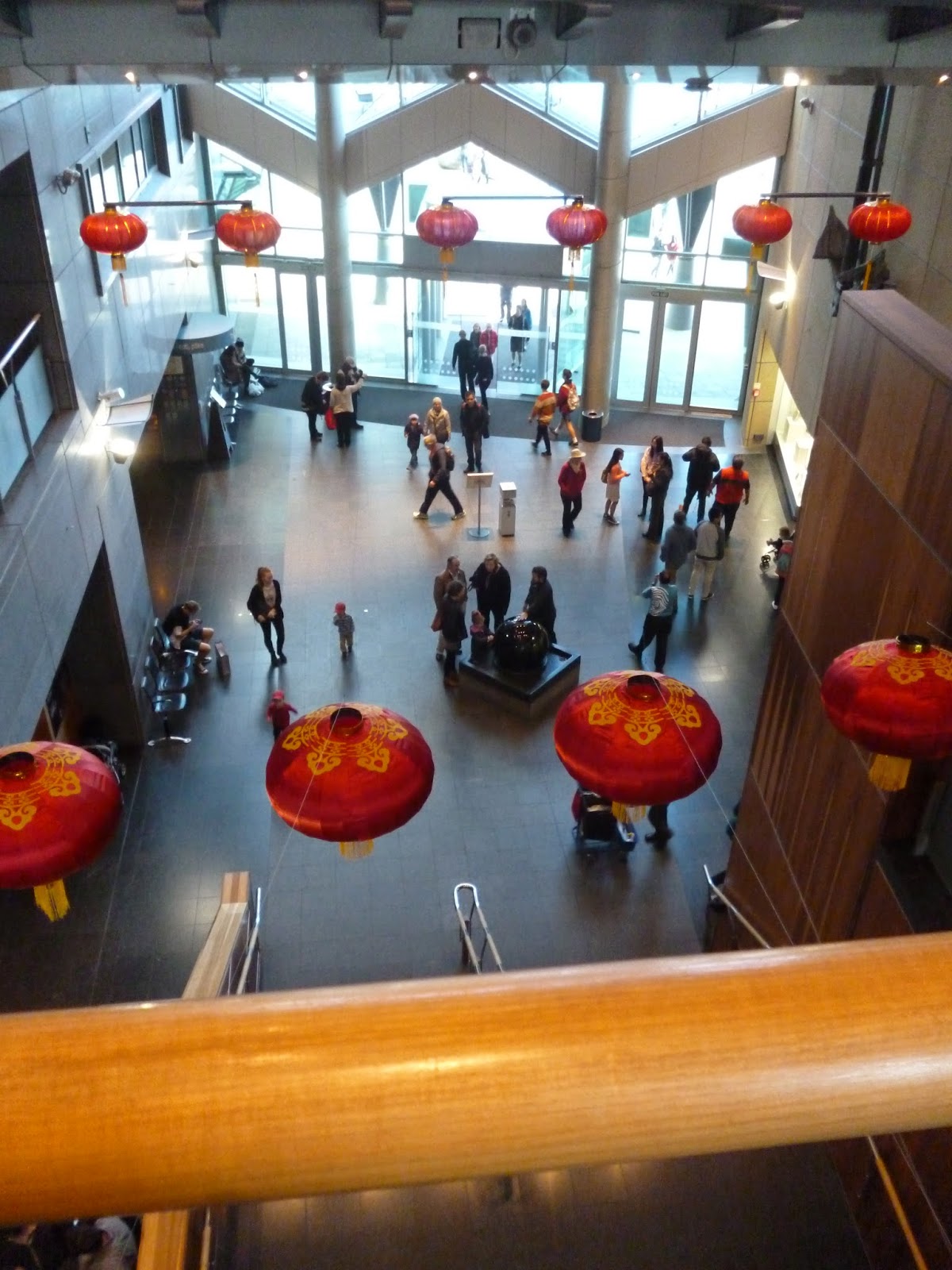 Also today was a stunning autumn day - instead of a miserably cold one! 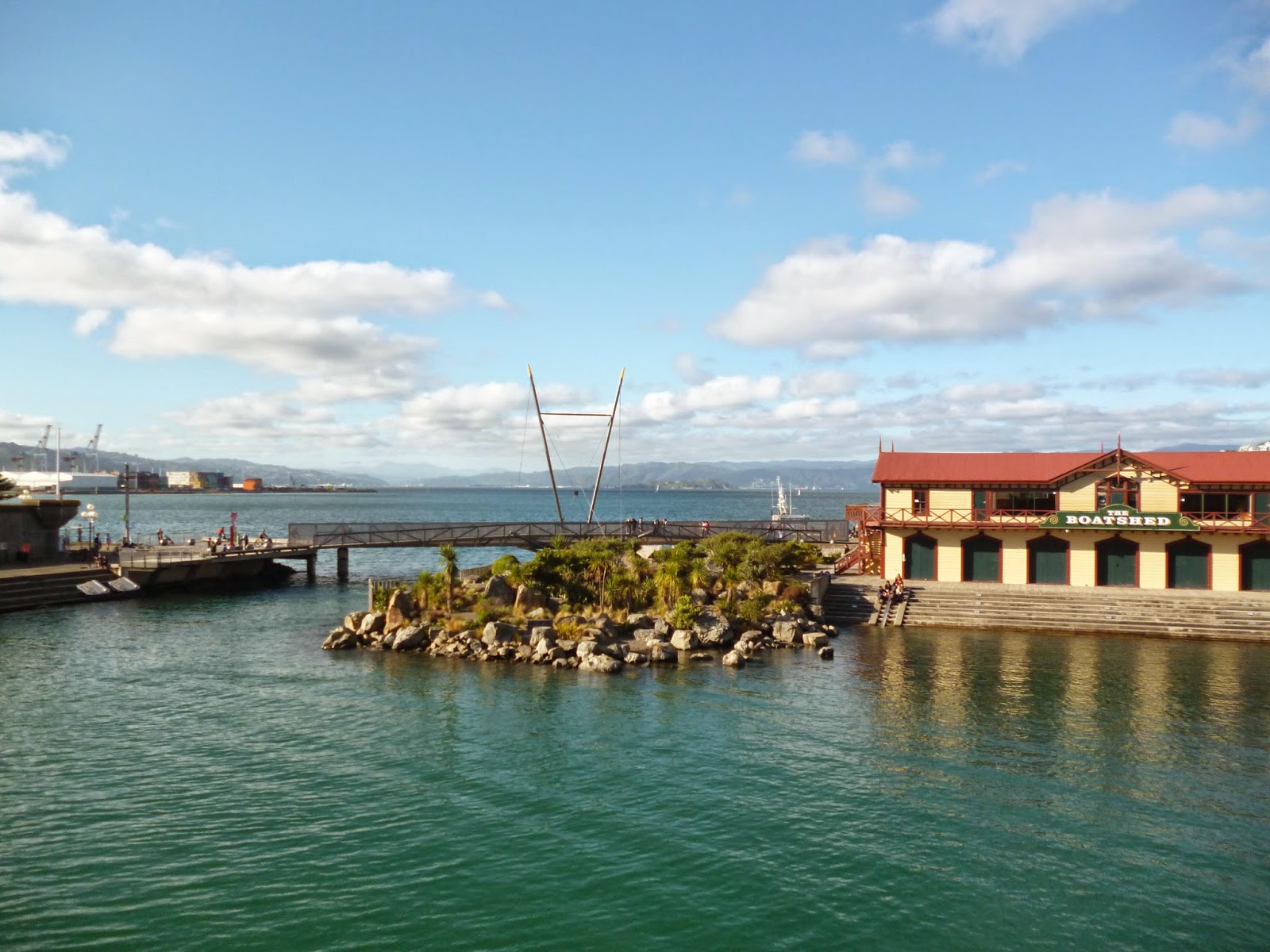 I hope you all had a wonderful weekend xoxo
Posted by Trees at 3:09 pm

What a great second week - isn't Me-Made-May great for making us realise how much we actually have in our wardrobe regardless that the sewing to do list never gets any shorter.

I love the Cinco de Mayo fabric and the big green print that Curtise likes. One day I will go to Te Papa when I drag Mr Asparagus Pea to the land of my childhood. Also the director of Te Papa used to be Head Honcho at the Museum Wales where I work - Bernice x

I love the fabruc if the a-line skirt. And actually am loving all the dresses, such crazy/coolf abric without being OTT

Although I am partial to the 'Meg' dress (and that green one OMG that FABRIC), I'm really really digging your mask dress. That is gorgeous. I love that. :-D

You've reminded me. I need to fix my sugar skull dress (after wearing it I decided it was a bit too long).

Fantastic posing ;) You keep asking me for action shots, but I am the queen of crappy face and awkward posing!

A gal with that many custom made frocks needs her own brand name! I am cracking up at all the props, you sure look good with that guitar and I love all the crazy prints you choose for your dresses!
Xxxxxxxoooooo

So typical that Curtise & I are drawn to the same frock....that green one rocks!!! That fabric takes my breath away. I'm loving the posing with props too. I love the put a bird on it dress, & the fabric of that first skirt. I will never stop proclaiming how clever you are. Xx