I just wanted to share a couple of recent embroidery patterns with you all - embroidery is one of those crafts that I get a little bit obsessed with for a couple of months, then I don't do any for about six months and then I pick it up again and think "why did I stop doing this?" - its awesome.

Here's a couple of embroidery hoops I made for our friends Nankz and Paul for their birthdays which are only a few weekend apart.

Recently, Nankz and I went to watch a film about the life of Rock Hudson and the Outtakes Film Festival these embroidery hoops hoops were inspired by Rock and those cheesy "beefcake" photos of the 1950's.

I used a pattern called "Beefcake Beach" which I picked up at Madam Fancy Pants on Cuba Street, they used to sell Sublime Stitching Patterns at Iko Iko too, but I haven't seen any there for a long time and Madam Fancy Pants only sells a limited number I think I the future I'll end up buying the patterns online. 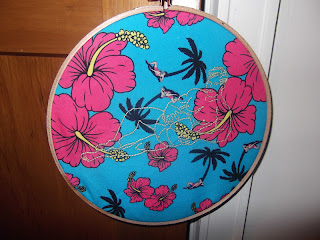 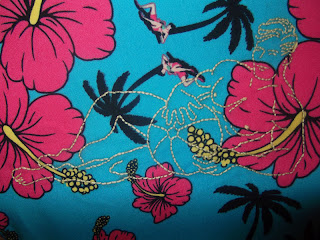 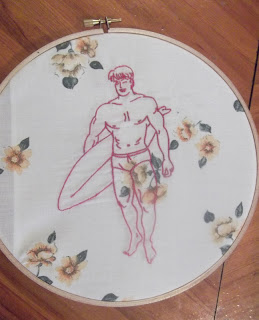 I'm currently working on a third beefcake babe - he's done in blue thread and is also on the same fabric as the surfer dude (the fabric is actually an old sheet I picked up at the op shop).

I'm off to look at more sublime stitching patterns - there are so many more designs I want to make - the totally metal designs are pretty awesome.
Posted by Trees at 7:47 am

These are pretty damn cool! Love them!

I haven't been in the blogosphere lately, off to catch up on your posts now xo

I really needto get back into embriodery. I miss it but i just cant find the time. I have plans of making presents for christmas. I love the use of a patterned fabric, it really addsto how cute they are!
Xo,cb