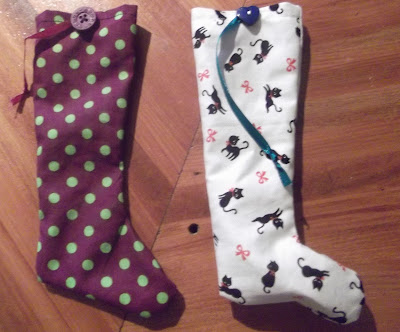 I've decided that this year will be my year for sewing, I did start to get into it this year, but to be honest I still found sewing hard and a little uninspiring at times.
However, the book "Sew La Tea Do" which I bought as a Christmas present to myself has helped to inspire me A LOT. Plus the instructions are so simple, I have to admit I've bought some patterns and then I've been put off making them as the instructions seemed like a total mystery to me. I guess that when these things are drafted there is an assumption that the person who will ultimately end up sewing them will have a certain degree of pre-existing sewing knowledge - which isn't the case with me.
So here is my list of sewing projects for January 2012 - I'll have to admit I am being pretty ambitious seem as I am going overseas for two and a half weeks on January 19th!
1. Make a Maxi Dress
I thought I'd start with this one as I have already completed the project - I was evening planning on taking some photos so I could do a post about it today but the weather is just horrible! I can tell you that I made the dress with a pattern I bought from this website. It was a pain to have to print out all the pattern pieces on A4, stick them together and cut then out and then cut the pattern out. But on the upside the instructions on how to put the dress together were really simple. I made this dress for my trip as I imagine its going to be REALLY hot so a thin cotton dress will be really useful. I may even make a second one if I have time.
2. Dress for my cousin's wedding
I am planning on making a dress for my cousins wedding and I am starting to cut it out today. I think its going to take up quite a lot of my free time over the next week and weekend but hopefully it will be worth it. I am planning on using the same pattern which I used for my very first dress which I blogged about here. However, seem as the wedding is in Phuket I am planning on making a more "tropical" version and there may even be heart shaped buttons involved if I can pull it off!
3. Capelet
This is something else I have wanted for a while and I think will be especially useful for my trip. Once Rich and I went to Hanoi and whilst there we decided to visit the tomb of Ho Chi Min. We were lined up outside in the EXTREMELY hot Vietnam weather waiting to enter the tomb when one of the guards told me I couldn't go in because my shoulders were showing. He also told me I was lucky because there was a store around the corner which sold tee shirts and scarves and if I went and bought one I could go into the tomb. I am pretty sure I was scammed (at least it wasn't just me - about half of the women in the line were told they weren't wearing enough clothes and had to buy a scarf/tee shirt to cover their legs or shoulders or both) so this trip I thought it would be a good idea to take a capelet to avoid repeating the situation. I've found a wee capelet pattern on burda style for free, so I will try and make that.
4. Tunic Dress
I am also planning on making the final dress from the Sew La Tea Do dress I haven't make yet - its a cute tunic dress and I have shark fabric to make it from. That's right people - fabric covered in sharks!!
I also have a few other things I would like to make this month, I think I could pull all of these projects off if I wasn't going away. But seen as I am only here for half the month I realise I must limit myself! The other projects include a pair of boxer shorts for Rich, two bibs for impending babies (Rich needs to cross-stitch them first though) and a movie blanket.
What's your January crafting plans?
Posted by Trees at 12:13 pm

I can't wait to see the finished products :)

Those Christmas stockings are just adorable, well done you.

Hopefully the weather will clear up there soon!!

I'm looking forward to seeing your creations, the capelet sounds a fab idea. I have no plans whatsoever, maybe I'll sew when I'm back in February! x

Those stockings are lovely. I made the kids their Christmas stockings - they aren't perfect by any means but I felt a certain sense of achievement! I don't do any sewing from scratch, just a bit of altering, taking in/up, but perhaps I should try... Hmmm!
Your plans sound good (and ambitious too!) Looking forward to seeing the results!

Those stockings are brilliant! And I'm v excited to see your sewing throughout the year. I want to knit more and hopefully open an etsy store this year. Fingers crossed!

i have yet to make my cape! i just haven't found a fabric that i like and the ones i do like are SO expensive, like $80 a yard! so crazy! i too want to sew more this year!
xo,
cb