On Thursday I visited an exhibition at Thistle Hall - it was a bit different from other exhibitions I have visited lately.

The exhibition was called "Photo Chop" (opposed to photo shop) and was a collage exhibition - which was a whole bunch of fun and bought back memories of sticking stuff on paper during primary school.

The best part of the exhibition was the DIY table - where you could make your own collage. Everything was provided - scissors, stanely knife, glue, board and a selection of magazines and books. 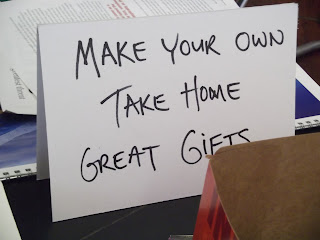 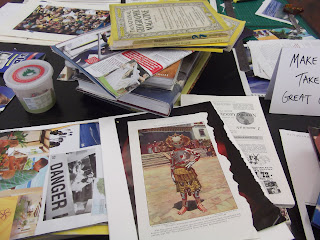 I can never resist a chance to create something new - so I found an ancient National Geographic amongs the books and magazines and decided to get to work. This particular magazine featured some kind of Taoist (I think) Gods - they reminded me of living in Taipei where random religous festivals with people dresses as Gods seemed to bust out at any time. I don't think the photo really does the images any justice - they really are pretty awesome. 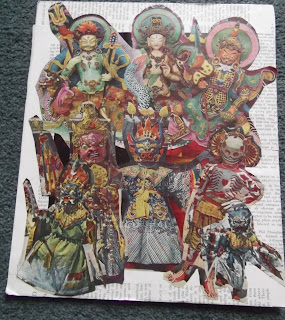 I love collage art!! It's so stimulating! cool!

I loved looking at all the other peoples works.

There was some collage on old records - that was awesome.