We woke again to roosters crowing - as this seems to be our daily routine in Rarotonga - but even worse we woke to RAIN!! Lots of it! The last few days of humidity had given way to a storm that completely changed our plans for the day. About mid-morning the rain stopped, but it looked like it could start again at any time - but we decided to risk having a look at what was happening in Avarua. 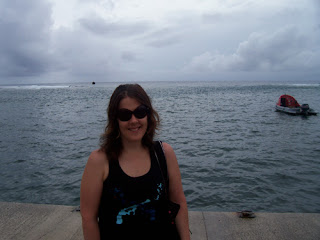 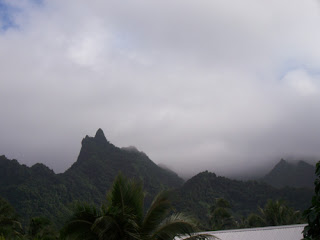 I knew that Cook Islanders were quite religious people but I didn't realise just how dead Avarua would be on Sunday - pretty much nothing was open and there was nobody around. We strolled along for a bit until we found the "Blue Note Cafe" open, so we decided to have an early lunch there, the adjoining shop which sold souvenirs was open so I picked up a whole bunch of postcards and a mug for my Dad. When we were eating the rain stopped but when we got up to leave it started again! We made it back to the motel just before it got too heavy. 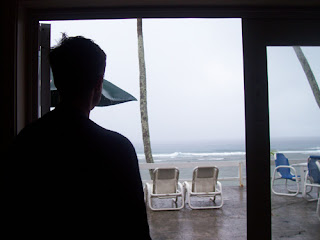 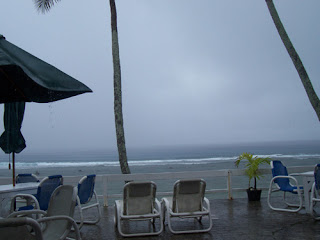 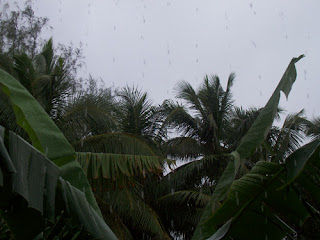 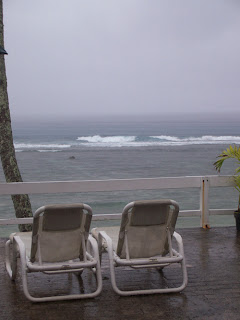 We ended up spending the next few hours in our unit at the motel - I wrote out some postcards and read and Rich did some sketches.

Finally at 3pm cabin fever got to us, it had been raining for the last few hours on and off but we both knew if we didn't get out and do something we would go crazy. So we packed our bags and some rain jackets and grabbed our bikes to go for a bike ride - it was so great to get out of the unit!

We didn't really have any particular destination to go to but Rarotonga is so small you don't really need to bike far before finding something interesting. Before long we arrived at "Black Rock". 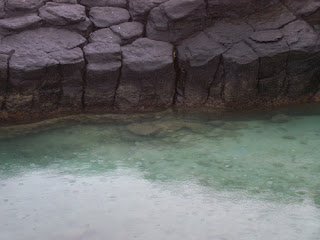 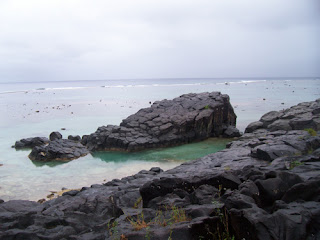 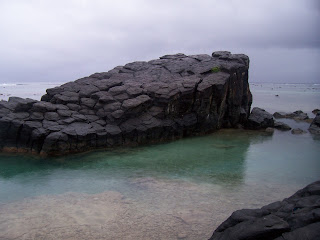 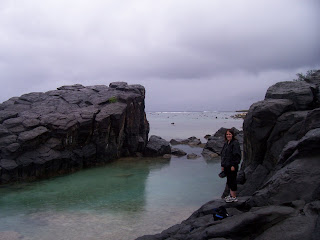 Black Rock is, as the name suggests a black rock but it's absolutely huge and really quite an amazing site. There is a legend about black rock that says when a famous missionary arrived in Rarotonga his ship was moored near Black Rock and he walked to shore clutching his bible above his head - apparently the 'true' story is he got a smaller boat to shore.

When standing near black rock we noticed a beach further along down the cliff so decided to bike a bit further along and check it out. We found this really cool shoreline with lots and lots of rock pools - so we went to check them out, they were so full of life! So many little fish and crabs. 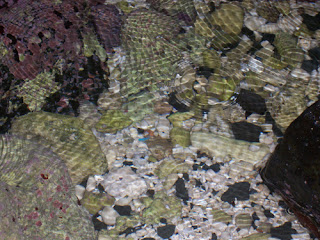 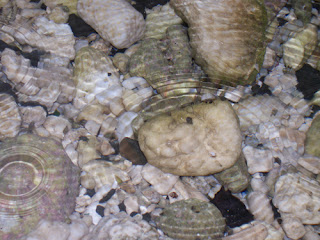 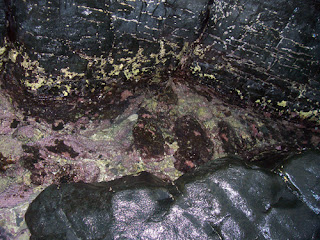 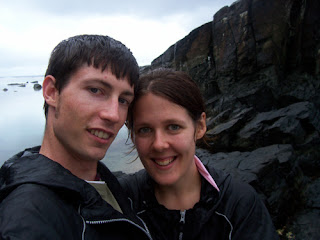 Unfortunately whilst we were down at the beach the rain came back in a BIG way so we decided we really had to go back to the motel. On the way home we decided to stop at a dairy. We didn't like our chances of finding a restaurant or cafe on Sunday night given what had happened at lunch so we decided to buy a can of spaghetti for tea - hey it's not glamorous but it filled the gap.

That evening we also tried some of the food we bought at the markets. The sweet corn we bought was so good, the guava was interesting - the flavour grew on me the more of it I ate. The banana pudding was NOT GOOD! I know - how can pudding be bad? But it was heavy and creamy - kinda had the texture of a big lump of gelatin and was way too sweet for me.

After our food adventures decided just to hang out at the unit (it's not like we had much choice - not a lot else was happening in Avarua) and read, sketch, write postcards and hope for a clear day tomorrow - as by this stage it was bucketing down!

hey chick loved your little holiday diary glad you both had a great time loved your photos wow such beauty i want to go to raro now lol spaghetti lol crack up :) love karen a