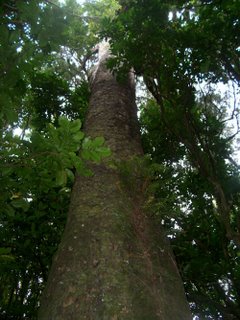 To finish off our Easter Break Rich and I decided to go for another day walk - this time it was Otari Wilton bush - and as you can see from the above picture of a Kahikatea Tree it's a pretty cool place.

Turns out that the reserve was established in the early days of European settlement by a guy called Job Wilton - he was a farmer but decided to keep park of his land aside as a reserve because of the destruction of native forest in New Zealand.

Which is good, because this is a really amazing place, whilst it's one of those walks where you're always keenly aware that "civilisation" is just around the corner - it's also a lot of fun because there's a lot of birds about (like native wood pidgeon's) and also a lot of very old trees - including an 800 year old Rimu which was very cool!!

There is also a fantastic picnic area there with "pay as you go" style BBQ's - so I think in the near future we will have to go back and have a picnic and do more walkies.

Also on the way to the park we found a garden centre and managed to buy some more herbs - including Pizza Thyme - which smells like Pizza Shapes! We had it on our homemade Pizza tonight and was really good:)
Posted by Trees at 4:21 pm