Last Saturday Rich, Ross and I went to see The Veils.I never got around to blogging about the gig due to problems with blogger (surprise surprise!!).

I know that it's very early days in the year but I have to say that The Veils gig was the best gig I have been to this year - in fact it's the best gig I've been too in months and months - their performance was awesome and everyone really got into it and they played an encore as well (with some encouragement from the crowd).

So anyways - if you ever get a chance to see The Veils - you TOTALLY should - here's a (slightly dark) photo that Rich took at the gig (his height gives him an advantage over me when it comes to gig related photography!!). 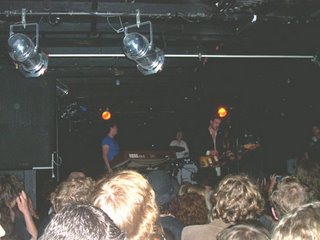