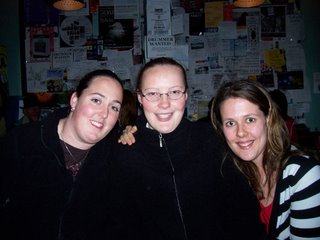 What did I get up to over the weekend? Well it all began with drinks and dinner with a group of mates because the lovely Sarah was visiting from Auckland. It was awesome to catch up as always and I was really interested to hear she is now doing a Diploma in Brewery part time - how cool!! Anyways there's a phot above of Sarah, Nat and I at Midnight Expresso.

On Saturday I finally had a haircut - I have been waiting to have one forever but it got to the stage where my hair was giving me a headache so it was time for the chop - and I have to say it looks a lot better too.

The it was time for the usual Saturday walk/gelato/gossip session with Jess and Ange along the waterfront and it was a stunning day - so stoked considering it felt a bit like it had been raining for weeks (although it hadn't).

After the walk I went to finally pick up my Doc Martins boots with my birthday money and Ange came along for a walk as well to find a bus to take home - I have to say that the boots are wicked!

Ange and I then ended up having a tea and further gossip at the Dixon Street Cafe:)

Rich and I were then at a bit of a loose end as to what to do for the rest of the night - I had orinally planned to spend that night with Marth but then she decided not to come down because it was too cold (and fair enough too!).

So we decided to have a "date night" which was really fun - went out at one of those restaurants that we always say we should go too - a place called "Zing" on Wakefield Street - it was very good food! Then we attempted to see something at the movies but there was really nothing on we wanted to watch as we left dinner a bit late...but I did get a bit distracted by the CD and DVD store in Courtney Central and bought a couple of DVD's and the new TV on the Radio CD with the last of my birthday money.

We ended up grabbing a coffee at Krazy Lounge and then heading home to watch one on the DVD's (it was really good - "Ed Wood" about the worst movie director in the world - it was directed by Tim Burton and the lead was played by Jonnie Depp so I didn't think it could be a bad movie).

Yeasterday was another stunner of a day - so we went for a bit of a walk and ended up on the waterfront again - but this time I saw a seal and a penguin swimming about it the harbour - which was really cool - not everyday you see animals like that in the wild.

The went to checkout the Ngai Tahu Exhibition at Te Papa - we saw some of it - but remeber it's school holidays....so decided that we would go back on a Thursday night and have a decent look when it's not so packed!

Then we went home and did some crafting for the rest of the afternoon....yah....I love crafting:)

In the evening caught up with Nankz and Ross at Midnight Expresso - was good to see both of those guys and have a bit of a chat:) Also when we were there we managed to pick up a booklet about some of the activist groups about town - including a feminist group so I may check them out.

Well this is a big entry and I should really go and get organised - I am going to QUEENSTOWN today so I need to finish off my packing and head to work!
Posted by Trees at 4:17 am