Wednesday Wardrobe Challenge: The Letter "A"

So it seems that for my weekend wardrobe challenge I'm going back to Wednesday Wardrobe Challenge - for the moment at least. It's highly likely I could end up doing the "Aussie Curves" challenge again as well. Basically when it comes to anything in relation to my wardrobe I'm inclined to change my mind at the drop of a hat.

Yesterday when it WAS actually Wednesday Wardrobe Challenge I had on an outfit I was most pleased with, however, I didn't get around to taking photos until late and when I did finally get around to it I discovered my camera batteries had gone flat so I couldn't take a photo anyway - epic fail.

So I decided to do wardrobe challenge again today - still based on the letter "A" the "A" being for the apples on my cardi.

However, to be honest - I'm not crazy about this outfit and its mostly the cardi. I bought it without trying it on, just snatched up the size "L" in the store thinking it will be a 12/14 and it should fit fine.

The problem with the cardi is that's its not really fitted and quite boxy and doesn't do much for my figure at all - I'm also not sure if it goes with this frock. Basically I'm not too crazy about this outfit. 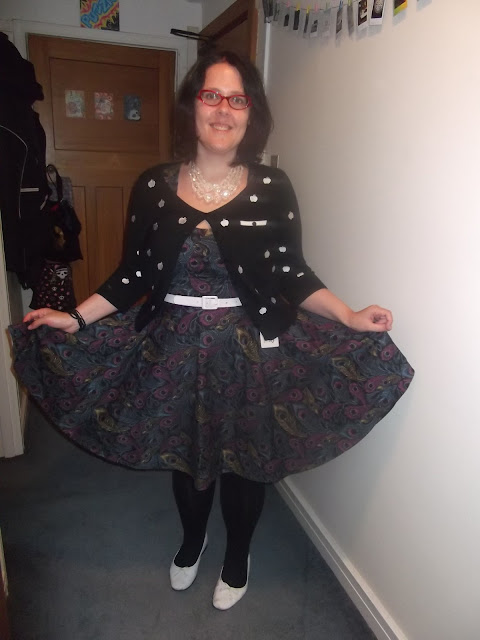 Also I would have MUCH rather taken a photo outside but the weather has turned on us and its really blowing a gale at the moment which is making it nearly impossible to take photos outside. In fact this dress was a pretty poor choice for such a blustery day as the skirt is so big it kept getting blown around by the wind. Not a good day in general I think - but as they saying goes "tomorrow is another day".

oh wow i love this dress, and your shoes and belt. I agree the cardi is prob not right for the dress but it still works okay. you look great and you should definatly join in more with Aussie Curves challenges!

I really love the dress and it looks lovely on you, too. I think the cardi is really cute, even if it is one you're a little unsure of xx

Shame about the cardigan.
You know, I only recently realised how important a cardigan should fit, too. Tossed out a few impulse buys (like yourself, those without trying on first), because they just were too long on the torso, or the raglan sleeves aren't working for me, or it was simply too tight!

i love the little apples!

I love the pattern on your dress Trees and I think your cardi is really cute too, maybe you just haven't found the outfit you love it with yet. Could you shrink it a bit in the tumble dryer if you think it's too big? Though it looks great to me in this photo. xx

ooooh such a cute dress darling!!! and me too i think the cardi is cute!
kiss,mary

I really like your dress. You look great. Have a nice weekend.

I reckon the cardi & the frock are really cute together! But if you're not feeling it, maybe try it with a few other things. I reckon you're looking good though! :)

I love the little apples , too bad. I too just started trying on card's. so crazy that it has taken me so long to do that! Love that dress on you. Always a fan of full skirts! Xo