So I have two New Years resolutions this year and the first is fairly simple - do something to improve the apartment each week.

You see when Rich and I moved overseas, we got rid of the vast majority of our "stuff". We had already been living together for a number of years at that stage and had all of the house stuff a couple could need - bed, table and chairs, couch, TV, cups, glasses, knives and forks, cupcake pans (ok so those were mostly mine) and we pretty much got rid of it ALL.

We kept the special things books, photos, CD's, art and put it into storage at my Mum and Dad's place (one of the fortunate thing about having parents that are farmers is that farmers tend to have a lot of storage).

When I say its fully furnished - I don't just mean the bed, couch and washing machine. I mean EVERYTHING - we don't even own the knives and forks we eat off.

When we were in the apartment hotel everything was bright, white and matchy-matchy. Gross.In our current apartment pretty much everything is a miss-match which is much more my style.

I have a couple of friends whose living situations have changed in the last year or so and when I talked to them about setting up an entire house I began to realise how terribly costly the whole thing would be.

I know we won't live in this apartment FOREVER, at some stage we will buy our own place. However, I only considered buying the big things for our future place and I figured we would buy a one or two bedroom apartment so we wouldn't need too much furniture. But I didn't really consider we don't have our own glasses, knives and forks or even a bedside table! Also we don't have a lot of the stuff that makes a house feel like a nice place to live.

So I decided that this year is the year to make the apartment look nice whilst also ensuring that when we move with do at least have some knives and forks (fortunately there is a massive storage cupboard in the apartment - so I can easily store the stuff that belongs to the apartment into storage).

I decided I may as well blog about the home improvement to share the changes to the place - as minimal as they may be, hopefully over the course of the year the weekly improvements will make the apartment a better place to be.

For the first week of my New Years Resolution I decided to start by adding some art to the kitchen - its actually something completed a while ago, but it really deserves to be on the wall not sitting a cupboard somewhere (stashed away with various cross-stitch materials). 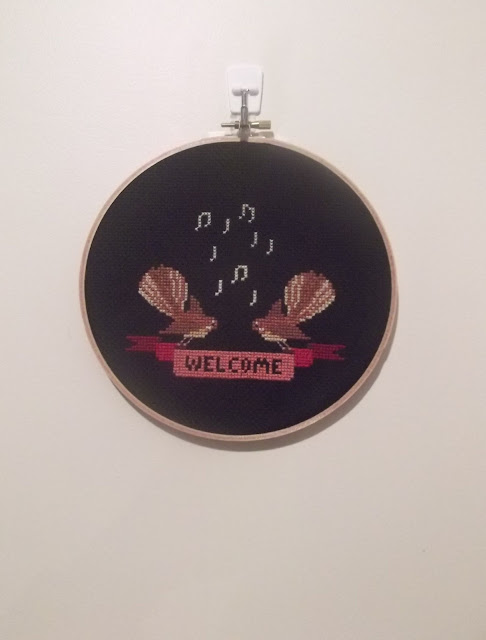 The two sweet little birds on this cross-stitch are fantail , I would say they are my favourite New Zealand bird, but I pretty much love all New Zealand birds (they were one of the things I missed the most when living overseas). I do love fantails a lot though - so lets just say there are in my top five. 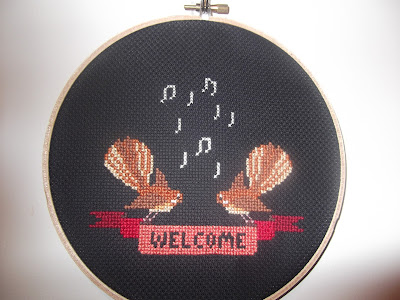 If you fancy cross-stitching a version of this pattern yourself, you can find it in Rich's esty store Robotsoon. In his spare time Rich is a cross-stitch pattern designer extraordinaire.

Fancy seeing a close up of the stitching? I thought I'd share as I always love close up images of cross-stitch. 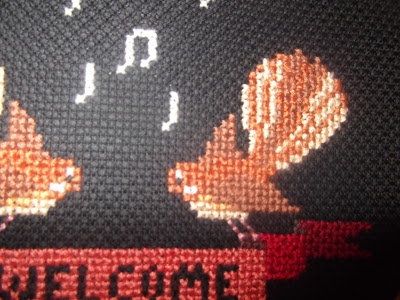 So right now you may be wondering - if Rich designed this pattern who cross-stitched it? If you imagined that I was the person to stitch up this pattern, then I'm afraid you're wrong. This is 100% Rich's work - design and stitching. Because real men stitch - just ask Mr X Stitch.

Finally here's a photo of the cross-stitch in our kitchen - I'm not really prepared to share the whole kitchen with the world. But you get the general idea - also the body corporate in this building is terrible and the windows have not been cleaned on the outside even once since we have lived here. Seriously lame. 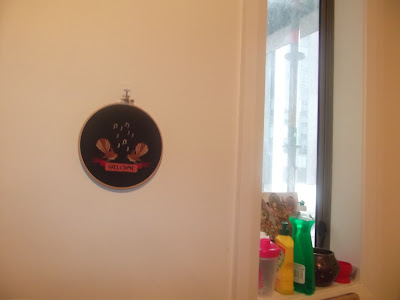 Tomorrow is my first day in a brand new job, so I best have an early night. Goodnight world!
Posted by Trees at 5:06 pm

Oh my gosh, I am amazed at your partner's talent! His patterns and stitching are beautiful.

I'm envious of your being able to live in a FULLY furnished apartment, AND still being able to give it some touches to make it to your liking.

P.S. This is my first time hearing about a man designing AND doing cross-stitch. Interesting.

i love rich. crafty husbands are the best husbands! <3

Owh. I would love to improve our apartment too but we are stuck in 2 tiny flats in 2 different cities not knowing where we will end up ><
I love that cross stitch piece!!! It looks amazing <3 I have tried cross stitching but never have the patience.
x, Lara
http://rockteraptor.blogspot.fi/

Yay!!!! I love this idea. I love coming home to out house, it makes me so happy because its filled with bright colorful happy things! Im excited for this adventure in home improvement!
Xo,cb

Well done Rich - talented man!
And good for you for making a start at improving and personalising your home. It will be great to collect and display things you have made and chosen, rather than what is provided for you. xxxx