Some of you may remeber this pattern I picked up a while ago from an op shop for a simple A-line skirt. 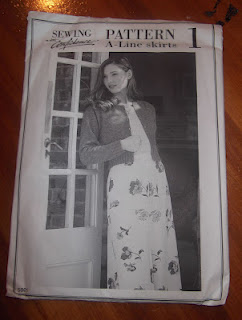 I had some cute fabric that I bought last time Emi and I did a mission to Spotlight and I decided that this fabric was destined to become an A-line skirt.

The weird thing is, a few years back basically all I ever wore was A-line skirts, I think they are one of the most flattering skirts out there. But I haven't worn them for a long time and I have to admit I felt a bit weird wearing mine today. I'm not sure if its a style I not used to anymore, or if its just not "me". 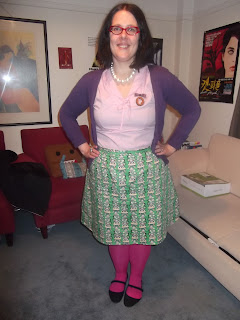 I should have taken a close up shot of the fabric as its pretty cute - it has Eastern European style dancing girls on it. Perhaps I would feel better if I wore it with a belt - it does feel a bit weird wearing something without a belt!

Other than finishing this skirt (which was laying about unfinished FOREVER) this weekend I caught up with my friend Jess, saw a couple of films in the New Zealand International Film Festival - one with Rich and the other with my friends Jaimee and Nilanka and although Rich was pretty busy with study for most of the weekend we did manage to visit the waterfront today - it was really pretty, I think spring is finally on the way. 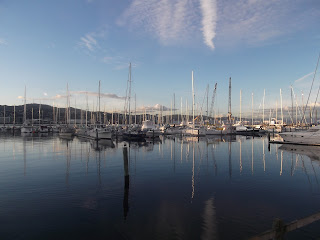 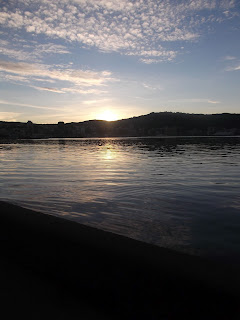 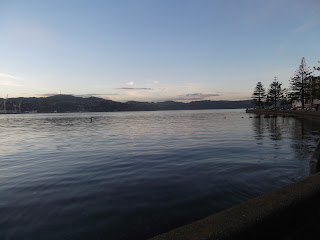 Finally, this weekend I decided it was time to start using my Instagram account, I've had the app on my phone for a while but I just haven't used it. If you want to find me my name is "treesinwelly" -although I've only uploaded five photos so far.

Enjoy the rest of your weekend xoxox
Posted by Trees at 5:04 pm

I love A-line skirts but I hardly wear them either. They are really flattering. Yours looks great. I love the colour with your pink tights.

I really like the skirt....I'm dying to see that fabric up close! I haven't worn any of my skirts for ages....I feel like they aren't as flattering on me as a frock. I think it's because of my little jelly belly. Looks like it was a gorgeous weekend in Welly. Xx

CUTE! i wish you took an up close picture too, the fabric sounds awesome and i LOVE it with those pink tights so much! tom is forever telling me to put a belt on everything i wear. it does look nice and sometimes feels better too.
xo,
cb

That skirt totally rocks,and I too would like a close up of the fabric! It's always strange to wear somehting different from your norm!But you're workin' it,baby!
Spring...I sooooo hope so,I'm gagging for it!
Are you still thinking about coming down sometime?? I'll totally cook you Mexican,or anything you fancy!
O,the company I found for Mexican supplies is Tip Pablo,and the website is tiopablo.co.nz

Your suggestions are always inspiring.

That skirt looks so pretty...give us a close-up! I love that shape of skirt on you and the combination of pink tights and Mary-Janes make it look so quirky and fun! x

oh darling your colourcombo is adorable! pink, green and purple i love it! and i tried to follow you on instagramm but it doesnt work :( my name is maryloucinnamon there
love and kiss,mary
http://www.maryloucinnamon.com/