Hello world and yes I am still sick - unbelievable right? I don't think I've been sick for this long is ages. Fingers crossed I recover over the weekend! I do actually feel a little better today.
Anyway lets now think back to the weekend, before I was sick! Rich and I had a really fun day on Sunday. We went out to Miramar, which is a suburb of Wellington to visit the Weta Cave.
What is a weta - you may ask (if you're not from New Zealand) well this is a Weta - but the Weta cave has nothing to do with real weta and in fact isn't much of a cave either.
Weta Workshop is a famous special effects workshop based in Miramar and there is a pretty good chance you've seen some of the movies they have worked on such as the Lord of the Rings Trilogy, King Kong, District 9, Prince Caspian. The Weta Cave is their mini museum and store and it tiny but mighty! 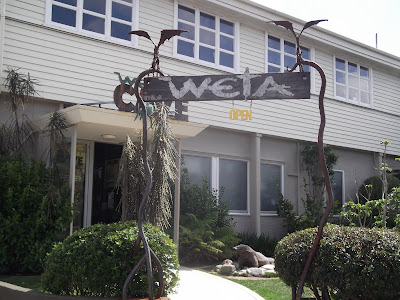 This guy was in the garden, he's pretty cool right? He looks so real. I'm not sure if he's from a film or he's there because he's completely awesome. 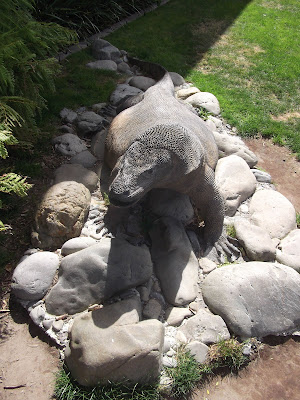 Lurtz is there to meet you when you enter the Weta Cave - he seems a bit miffed though. But seriously, it's amazing to see something like this up close. The detail that's put into it is really fascinating. 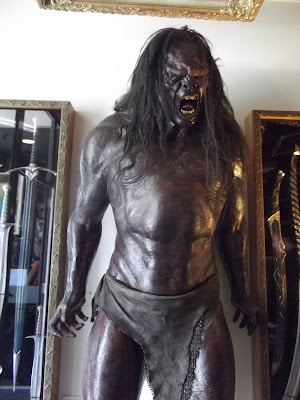 It turns out that Lurtz doesn't like people very much - so it pays not to get too close or you might get bitten! 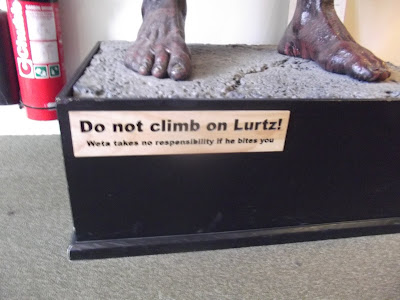 I tried to look scared - I really did. But when you're as smiley as I am it can be pretty darn difficult to put on a "scared" face. 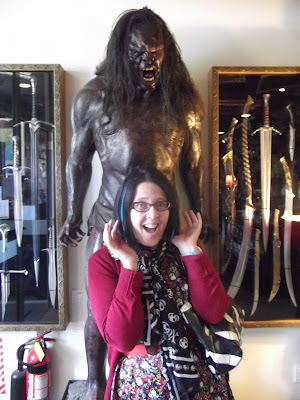 There were a lot of movie props at the Weta Cave including these from "Braindead" - which is one of Peter Jackson's early films. Back before Lord of the Rings he used to make some great splatter flicks - I really hope he'll decide one day to make another. If you like horror and you haven't seen it I highly recommend it! Although if you live in the USA the movie is released under the title "Dead Alive". 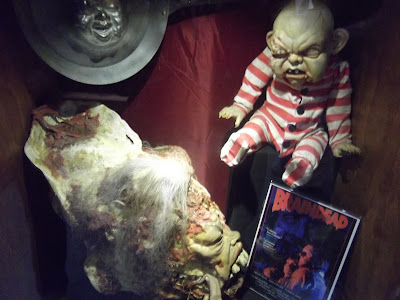 These guys are from another old Peter Jackson movie "Meet the Feebles" which is a bit like the muppets - if the muppets were R18 and a wee bit crazy. I've seen this movie a few times and I love it! But it's not for everyone that's for sure. If you want to see the trailer you can view it here. 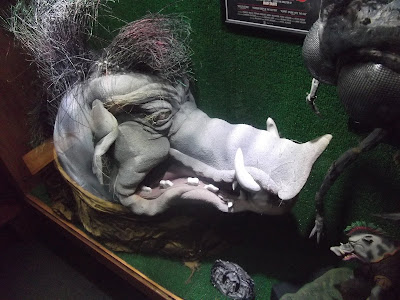 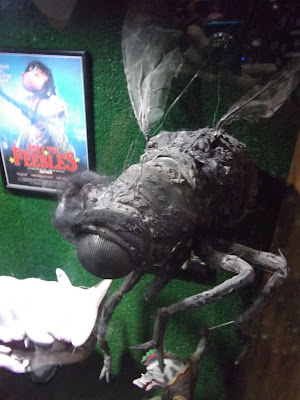 This guy from "Prince Caspian" is more likely to be recognised by people, as is this cutie from "Waterhorse". 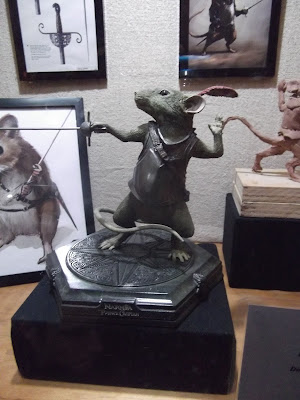 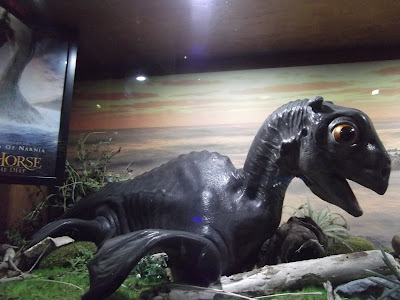 This "Baby Prawn" from "District 9" was really cool - I loved that movie a lot. I wish they had a full size prawn though. 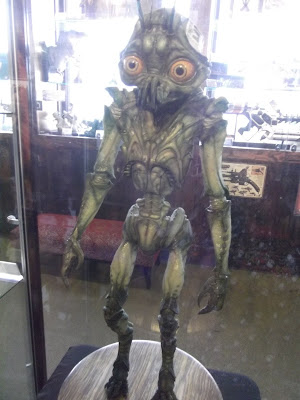 We also got to me Golem - he was pretty cool, but in these photos he looks a bit like he's giving us the evil eye! 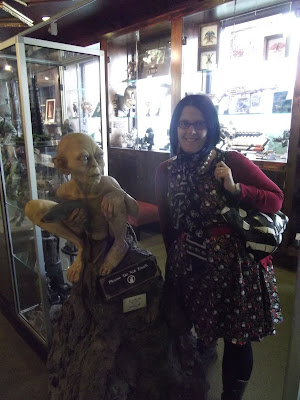 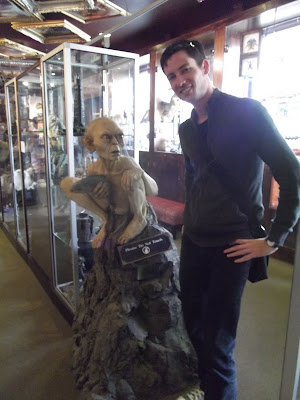 I was never really much into Tintin as a kid, I never read the books and I didn't go to the movie but I have to admit that these guys were pretty cool. 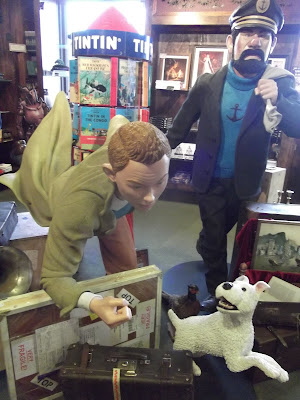 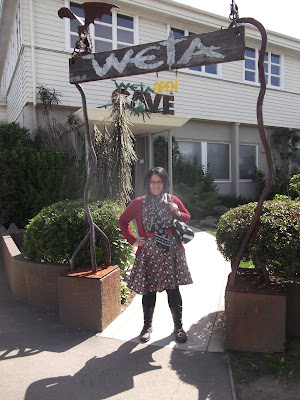 After the Weta Cave it was time to get a bite to eat, we decided to go to "Coco at Roxy" which is the cafe at the "Roxy Cinema" which is a beautiful restored old Cinema. 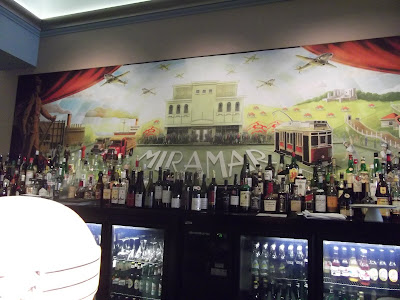 We did want to see a movie at the Roxy but there just weren't any on at the time we were there, the next movie was starting in the evening. But that didn't stop us having a look around the cinema which is just beautiful - it puts all those horrible modern "multiplexes" to shame!! 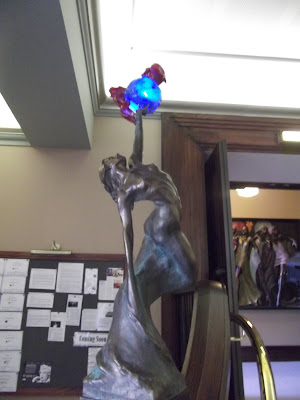 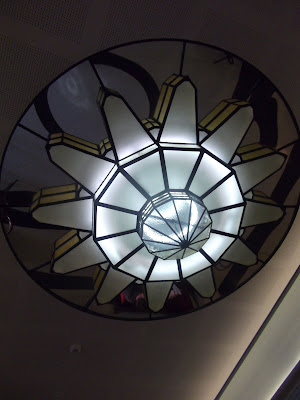 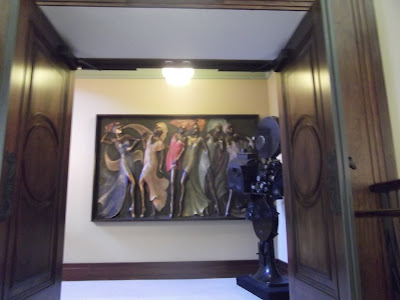 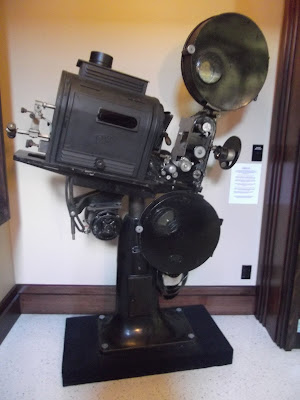 They had another Golem at the Roxy - this one was a little scary though as he was cast in some kind of metal and had no eyes. 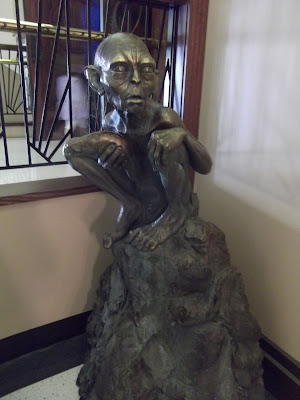 This is a very small part of the mural painted on the ceiling in the upstairs foyer of the cinema - it's truly incredible. This photo doesn't even begin to capture how amazing it really is! 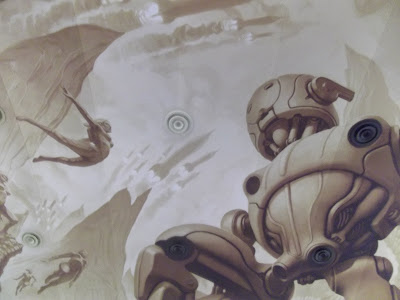 A few more shots of the beautiful upstairs foyer area, there was a full bar up here too. I think if I lived in Miramar I'd love to come out here and grab a drink and soak in the beauty of it all. 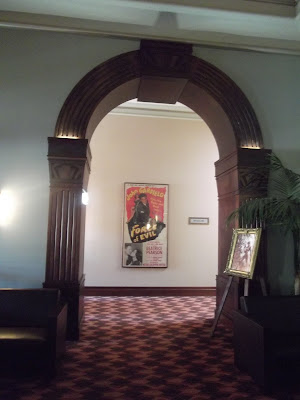 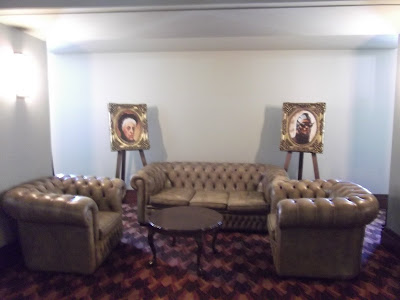 There was also a collection of old movie posters up stairs - here's a few of my favourites, although the one for "Green Slime" is by far the best in my opinion. 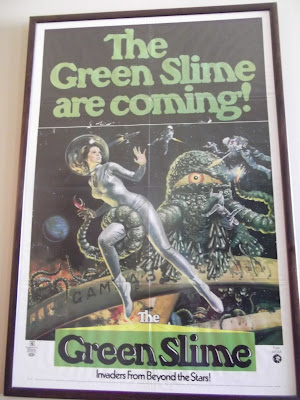 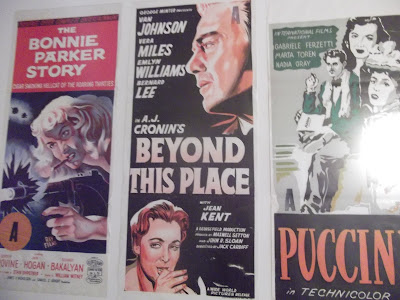 ah what your still sick? you poor thing! i do hope you get better as soon as possible! the weta cave looks sooo cool! the lord of the rings were such good movies. i have to read them still. i read the hobbit and loved it. tom bought me the first book as we were missing it. they are on my reading list. its funny, it seems like there is a roxy theater everywhere! it must be a chain or something.

gets lots of rest and drink lots of water!
xo,
cb

i read an article once about WETA making a "real" mermaid tail for a woman who was a double leg amputee. so awesome!

@ Alicia - Every time I go travelling and tell people where I'm from I get "Like Lord of the Rings!" so I'm used to it, besides there are much worse things to be known for than LOTR. Although we do get LOTR tours here where people go and see the sites where the movies were filmed - I think some of those people actually think they are hobbits or elves!!

That mermaid tail was amazing - it was in the papers here too! Weta does so truly amazing things :)

Fab pics! I've been to Weta and really enjoyed it too. For such a small space there's a lot packed in!
Not been to Roxy yet but must check it out!

This looks incredible! I so wanna go here, what an absolute blast and totally my kind of thing. This does look like the perfect spot to have a drink and soak it all up! The mural on the ceiling did look breathtaking, loved all the creatures from familiar movies. You do fun stuff girl!
Xoxo-
Krista

I hope you get better soon. Weta looks amazing. That second Gollum is so creepy looking.

Thanks for sharing these amazing pics with us!

What a fab place! Golem was the highlight of Lord Of The Rings for me, I slept thorough most of the trilogy! Hope you feel better soon! x

Love all these pictures! Man, that place looks like an absolute blast. It really does look like Gollum is giving you the evil eye as well!

Golem is fab!
And I loved District 9 too.
Hope you feel MUCH better as soon as humanly possible! xxxxxxxxxxxxxx