Ross & Shelley's wedding in the Naki

If you follow my blog regularly you will remember that a couple of weekends ago Rich and I went to Taranaki (the Naki) for our friends Ross and Shelley's wedding.
A whole group of us stayed near the wedding venue in this beautiful house my friend Diane booked for us - isn't it amazing? I think it has to be the best kept secret in Onaero , just look at those views!
We had beach access and I went swimming three times (actually in my case less swimming more paddling or "frolicking") and we had a spa pool as well - so fancy. Just look at the views we had! 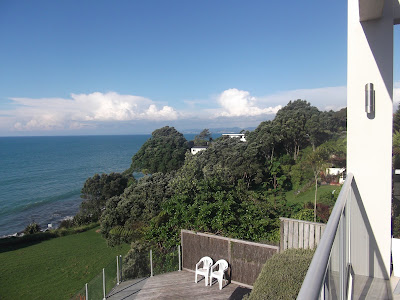 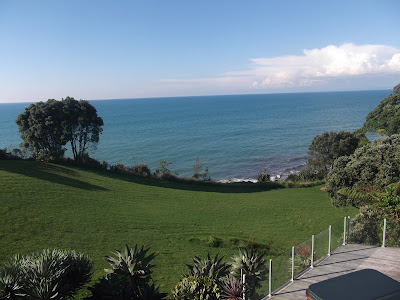 Here's some pre-wedding photos, we all look pretty good, it seems that Ross and Shelley have some pretty good looking friends. 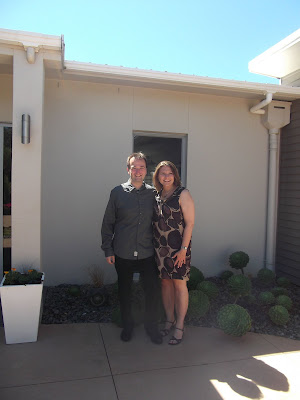 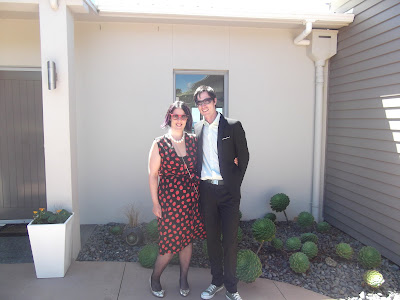 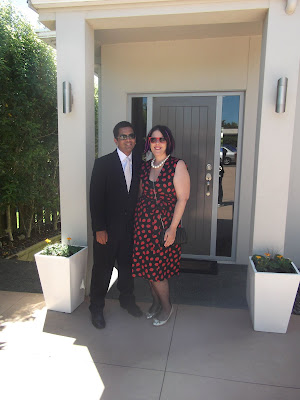 I didn't realise this last one was going to be a full length shot - so I don't have my shoes on. I actually wore heels so I wanted to limit the amount of time I had to wear them so I didn't put them on until just before we left.
On the left are Kai and Diane, our friends from Germany, the are New Zealand citizens now. We met them when we first arrived home from overseas at Ross and Shelley's engagement party and so glad we met them, they are a whole lot of fun. 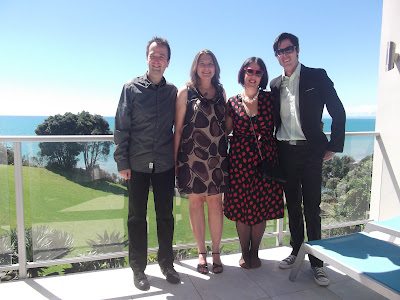 This is me with one of my oldest friends Sue! She lives in the UK now with her fiancée Conor - I want them to come home to NZ, or at least to Australia - I would even accept Hong Kong or Singapore. Sue, Conor, Ross and I have all known each other since we started university (in 1998). But Conor, Sue and Nilanka (the handsome man in the third photo down) have all known each other since high school - or even possibly primary school. 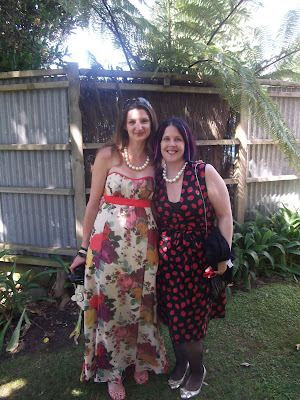 Here's the beautiful bride walking down the isle looking like an absolute stunner in her frock! 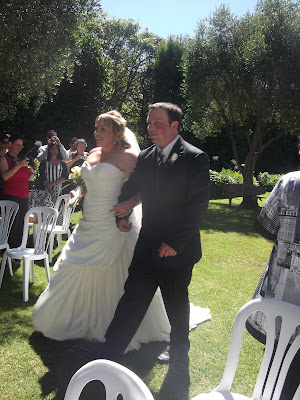 Ross and Shelley have both lost some very important people over the last few years, so they lit candles at the ceremony to remember those who have passed on, I thought it was a really touching gesture. 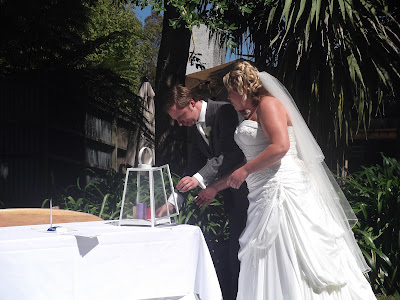 Some more shots of the ceremony - the celebrant was a bit of a hoot! 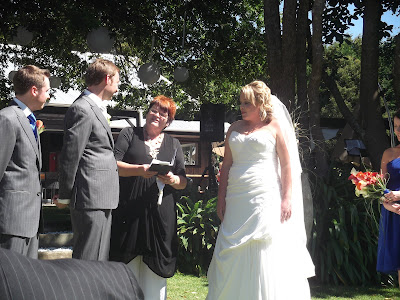 Then it was time for the signing of the register, followed up by the drinking of bubbles and congratulations to the bride and groom! 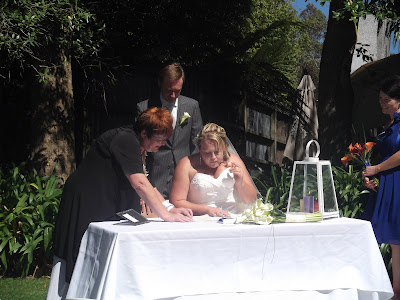 Whilst Ross and Shelley went to have their official photos done, we hung around and took photos of ourselves, because we're awesome. 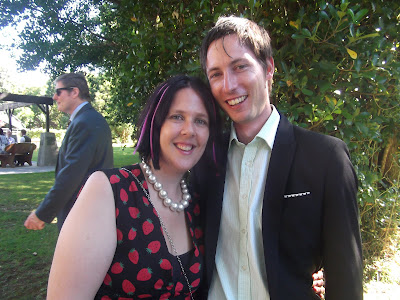 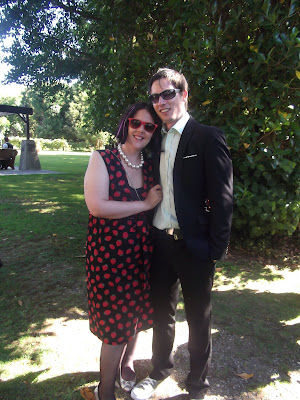 I met Nilanka through Sue and Conor when we all lived in Hamilton and Nilanka came up for a visit, now we live in Wellington we get to hang out lots which I love because both Nankz and his partner Paul are such a blast. I love having coffee and brunches with these guys. 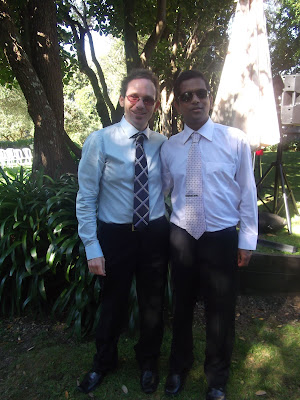 As you can tell from the photos it was a hot summers day at one stage Sue got a lemon, lime and bitters and then we all wanted one... 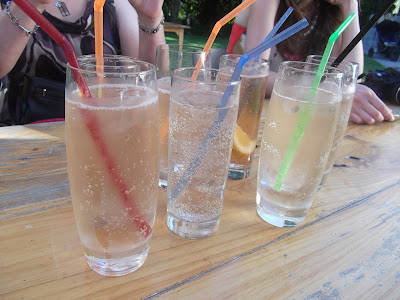 Here's the set up at the dinner table, that little silver container is some tea which was the wedding favour - very cute. Ross and Shelley didn't have a buffet - they had table service which I think is so much better. 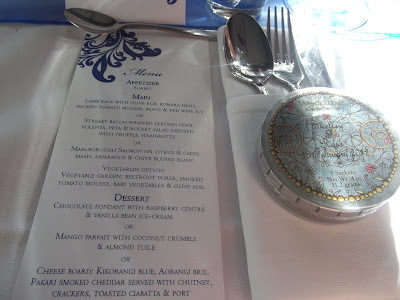 I had the salmon for my main and it was amazing - yes it did taste as good as it looks! 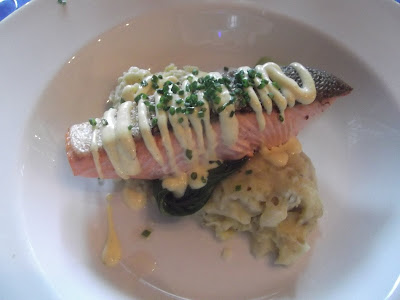 Here was the dessert- chocolate deliciousness - I can't remember what it was called but it was awesome! 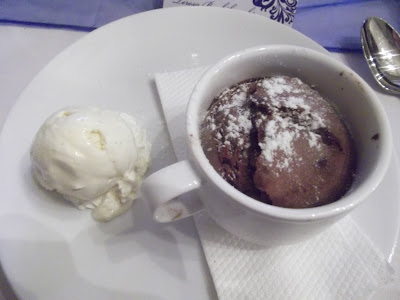 Ross and Shelley didn't have a wedding cake - but they did have wedding cupcakes. How cool is that? They even had a big cupcake on the top so that they could still "cut the cake" together. 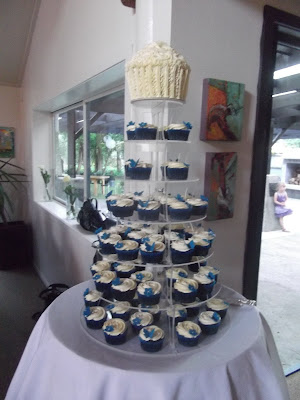 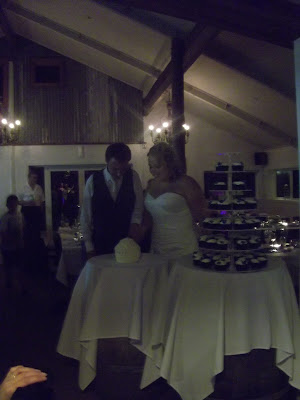 Here's the first dance of the evening and it turns out Ross and Shelley can really dance - it helps that Ross did ceroc for years though! 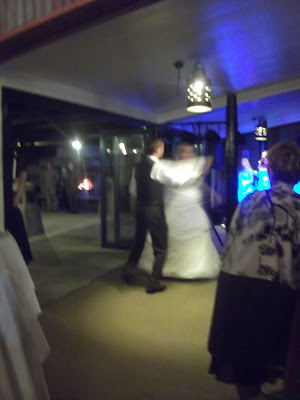 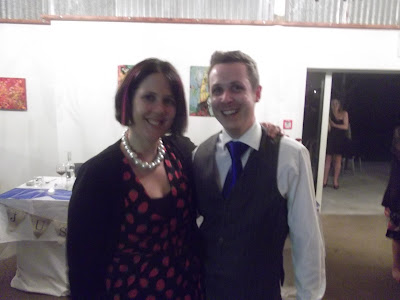 That's why we have been friends for FIFTEEN years!! 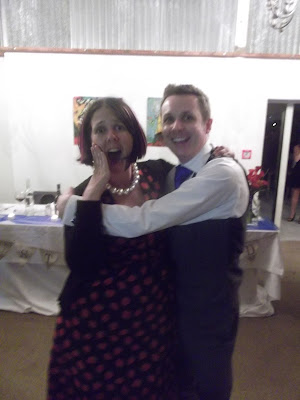 Finally here's a shot from the plane on the day we were flying back to Wellington - you can see the outline of the North Island pretty well. Being a map geek - I always love stuff like this. 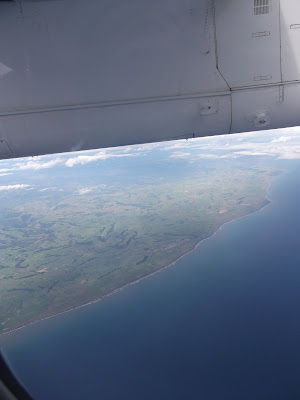 Fun! :) Looks like an awesome wedding. The food looks amazing! I love salmon :) and cupcakes :D

Such lovely photos. That place you stayed looks amazing. It's one place we haven't visited yet. Love your frock too, & the food...YUM! Xx

The location is absolutely fabulous and the weather looked perfect. You all scrubbed up extremely well, your dress is fabulous. x

Gorgeous scenery.
Looks like you had fun :)
LOVE your dress xo

Your dress looked fabulous - hope yop felt as good in it as you looked! What a gorgeous wedding, how lovely to have an outdoor ceremony. Everyone is very smart!
The photos of where you stayed look amazing.xxxx

take me to this place, i want to go there! it looks amazing!! you have such a wonderful group of friends, i love seeing you all together!
xo,
cb

Looks like it was a great day for a wedding. Your dress looked fabulous. Mmmm that dessert looks so good.

You two look absolutely amazing! What a beautiful wedding - I hope the couple have a happy life!