Film number 11 was a horror/thriller which was playing at a film festival at Seoul. The film is from 1973 and the basic story line is that a couple's young daughter drowns in a pond near their house, shortly after they move to Venice for work and to deal with the loss.

But in Venice, weird things start to happen, beginning with a chance meeting with an elderly blind psychic and her sister. It's a very dark film in a very spine tingling kind of way.

One of my favourite things in the movie was the portrayal of Venice. In art and movies Venice is always portrayed as a light, bright, romantic city, but I've always wondered what Venice is really like? I've read so much about how often the city floods and the fact it is literally "sinking" and that so much of the city is under "repair" due to all the precious historical architecture.

In "Don't Look Now" Venice is portrayed as a dark, dismal and quite frighting place - lots of dark streets and alleyways that all looks the same, shadowy figures, damp and dark and generally quite grimy. I really liked this perspective of the city and I'm really happy we made the effort to head to the Seoul during the week to see this film. 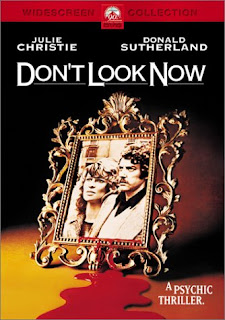