Last weekend in Seoul ended up being a very busy one, a few weeks back we heard that a Chinese band that we really liked called "Carsick Cars" were playing in Hongdae. We both really wanted to see the gig especially seen as we haven't seen any live music since we moved to Korea!
But the problem with Seoul is that the subway system stops at around midnight and doesn't start again until about 6am the following day, we knew the gig would finish much later than midnight and didn't fancy hanging around in an all hour cafe waiting for the subway to open so we decided to spent the weekend in Seoul.

We stayed at the most amazing backpackers called "Hongdae Guesthouse". If you even want to spend the night in Hongdae than this is the place - our double room was huge and had an ensuite and a computer with a big screen where we could have watched DVD's if we wanted too. It also had, amongst other things the most amazing view. 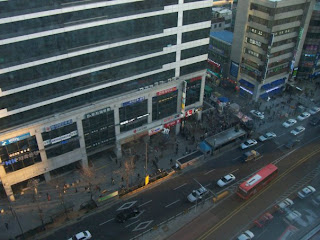 We arrived at the backpackers at about four in the afternoon and as the gig wasn't starting until ten at night we had a lot of time to kill! But that's fine because Hongdae is an amazing place, we ate some really great Mexican food for dinner (I had the best nacho's ever - they weren't greasy or heavy at all!) which was followed up by wandering around Hongdae and drinking tea in a very cute cafe - dedicated to tea. They even had pikelets which I would have been very tempted by if I hadn't just eaten dinner. 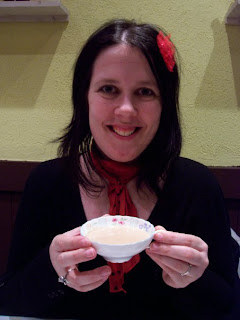 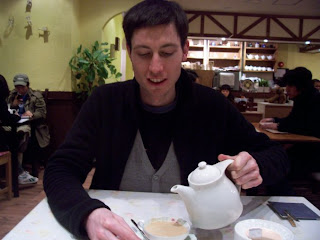 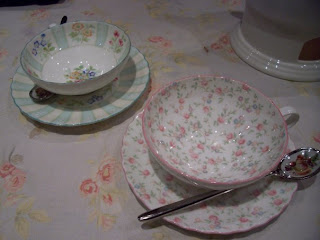 We headed back to the backpackers to get ready for a great night out and stopped to look at the amazing view from our backpackers for a while. 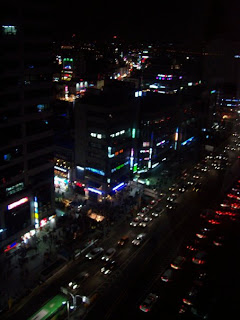 Before we left, Rich drew up a little map of how to make it to the club where the gig was being held and we made it there pretty easily - I'm so glad to have Rich as I have no sense of direction and if he wasn't here I'm pretty sure I'd get lost most days.

The club where the gig was being held was called "Drug" and it was just like "Happy" in Wellington or "Ward Lane Taven" in Hamilton, it seems that no matter how far you travel some things will always remain the same.

Their were two warm up bands before Carsick Cars, both Korean, the first was called "Eloise" and they sounded like a Korean version of the strokes. I forget the second bands name but they were a bit too electronic for me but the crowd seemed to love them. The finally it was time for Carsick Cars - rock on! 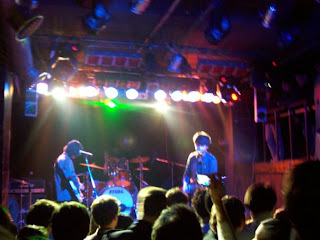 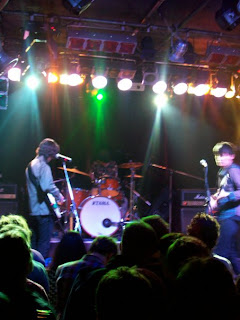 The following day we went to have the free breakfast (well a hot drink and some toast) that the backpackers offered and ended up spending a lot of time speaking with the owner of the backpackers who is the loveliest lady - she'd even visited New Zealand and wanted to share some of her adventures with us.

Eventually we had to leave as we had a Seoul Art Meet Up group even on and we had to make it all the way over to Yeouido to meet the group. This weekends adventure was visiting the Nam June Paik Art Centre, however, we didn't realise just how long it was going to take to get to the gallery by bus! I think it must have taken us about an hour and a half to get there but it was totally worth it. I didn't really know much about Nam June Paik before we went, although Rich was familar with him. His area of interest was very post modern media style art and his work was really incredible - if you live in Seoul or Gyeonggi you should really make the effort to visit the art centre. 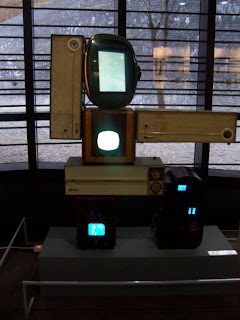 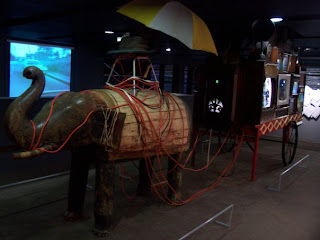 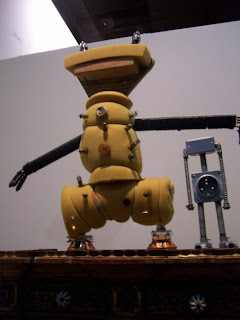 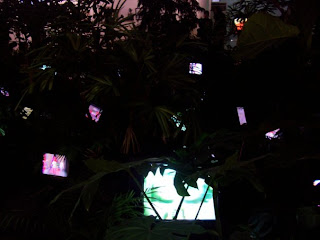 After we finished at the gallery, it was time for a dinner and chatting with the art meet up group where we met even more amazing arty people.

Finally it was time for a two hour bus and subway ride back home - it was a really long ride home but totally worth it! What an amazing weekend!
Posted by Trees at 3:39 pm