Yesterday Nat, Fiona and I thought we would try skating out in Kilbirnie for a change, instead of heading ALL the way out to Lower Hutt to skate. This didn't work out for us at all - even though it was a public session the rink was full of skateboarders and ramps and basically it looked like it would have been damn near impossible to skate in there without having a collision with a skate board within moments of entering the rink!

Given the fact that the weather was so so awful we couldn't skate outside either and it was too later to head to Lower Hutt so we decided that we'd go out for something to eat instead. We decided to head to the Maranui Cafe - the view from the cafe was really amazing with HUGE waves and seagulls being blown backwards (yes - it was that windy). 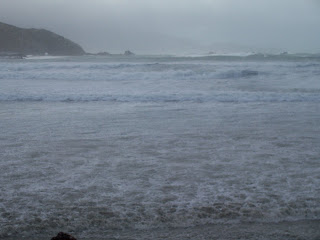 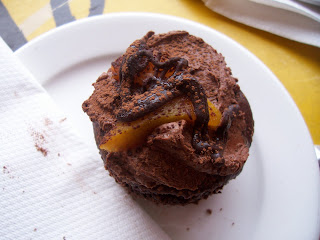 Unfortunately, by the time I got home I wasn't feeling so well. I think that being out and about in the nasty weather wasn't so good for me (plus half my team at work has been sick with a bug). So I decided that I best say in and keep warm for the rest of the weekend - which isn't too difficult given how nasty the weather is!
Posted by Trees at 11:28 am