George A. Romero's: Diary of the Dead

So it is coming up to one of my favourite times of the year, International Film Festival time!

But this is also ALWAYS one of the most frustrating times of the year also as there are so many interesting and crazy films on that I want to watch and I never have enough time (damn having to work for a living!) or enough cash to see everything I want to see.

Often by the time Rich and I get around to buying tickets some of the films we want to see have sold out. This year - we decided to make a list from the outset of what we want to see, and then we culled this list, and culled it again and managed to get the list down to ten films.

We haven't yet bought tickets for all of these films, but last week I did go and buy tickets to one of the films as I cannot miss out on it!

The film is George A Romero's:Diary of the Dead - unless you're are a zombie/horror movie freak you will, in all likelihood have no idea why I MUST see this film and why I MUST see it at the cinema. Put simply - George A Romero is the godfather of zombie movies, in fact, I'm not sure zombie movies would really exist without him- he's made all the best zombie films - Return of the Living Dead, Dawn of the Dead, Day of the Dead as well as a few other more random horror films like "The Crazies".

Put simply if you love horrors and you love zombie's George A Romero is the man - and I have to say I am more than just a bit excited to have two tickets to "Diary of the Dead" sitting in my wallet right now! 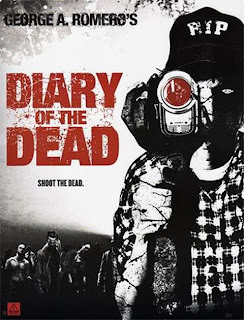