Inspiration for a long term project!!

My new favourite website is http://www.craftzine.com/ and whilst checking it out the other day I found a project that is really inspiring that I want to make. Here it is - 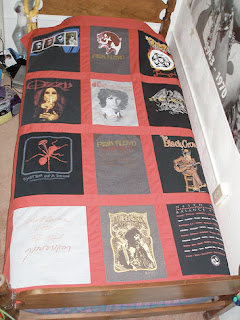 How cool is this? It's like a rock and roll bedspread! Now I am the first to admit that the Black Crows and the doors aren't my thing. But with the right t-shirts I think I could make one that was pretty cool.

I'm not sure how many t-shirts I would need - but Rich has already volunteered three of his that are past their used by date (due to wear - not due to lack of being awesome) - so I already have Placebo, The Hives and Shihad for my t-shirt throw (I may also have Iggy Pop but Rich isn't sure if he can let Iggy go just yet).

I have had a look on trade me for music t-shirts but that was pretty slim pickings - they all seemed to be new t-shirts that people wanted to sell for around $25 a piece! Doesn't really work with my DIY dream!

So I think over the next few months I shall be checking out as many second hand shops as I can for band t-shirts worthy of our couch throw.

http://wisdomofthemoon.blogspot.com/2007/10/oh-waitings-so-hard-to-do.html
Posted by Trees at 4:30 am