So now I am feeling much less grumpy....
Arrived at Melbourne airport after a relatively nice flight and had to wait a while to declare Ally's mallowpuffs!But when I actually arrived out into the main entrance to hear Ally yell out "Trees" very excitedly I was really stoked and SO happy to be in Melbourne!
We went to Ally's to drop off my bags and so I could freshen up a little - seen as I had been awake since 2:40 am and when I got to Ally's it was already about 11:30 am NZ time. I met Ally's partner Boggy briefly and he drove us to town so we could have breakfast. I arrived at the restaurant wondering why I was feeling so hungry but then I realised I had breakfast very early and no morning tea and now it was about lunch time. We went to one of Ally's regular haunts near her work and I had some yummy muesli....tasty!
After breakfast/lunch Ally had to dash off to her office which gave me the rest of the morning in Melbourne to myself. I had decided on the plane that in my first day in the city I wanted to do two things 1) Visit Chinatown and 2) Vist the Old Melbourne Gaol. But for my first few hours in Melbourne I just ended up wandering about - I didn't even go into any shops (despite really wanting to go into a couple - but they were shut as it was before 10am).
I did get to go and have a wander around Federation square, and the one thing happened to me that always happens to me when I have no idea where I am...I got asked for directions - I guess that's good though, must look like I know what I am doing rather than looking like a lost tourist. 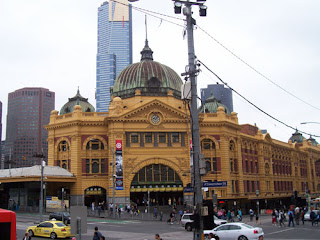 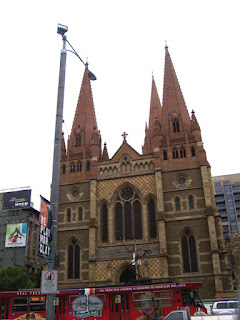 I manged to get back to Ally's work at 11:45 am in time for my pedicure which Ally shouted me as a holiday treat:) The pedicure was nice, and I got a shoulder and foot massage as well - although the beauty therapist pointed out I should be having massages more often due to the fact I lift weights and walk a lot (she kinda worked out I lifted weights and walked alot from all the tension in my back and feet). Maybe I should start going to those Friday evening massages at The Cross?

Ally had to leave straight after the beauty treatments - so it was time for more exploring of Melbourne by myself. I have to say I love the fact that A) Melbourne is in a grib pattern and B) that I had a map!I ended up visiting Chinatown first - I still can't believe that neither Auckland or Wellington have a Chinatown. The Chinatown in Melbourne is pretty darn cool - the streets look slightly different to the other streets in Melbourne as they have these awesome archways and cool oriental looking street lights and lots and lots of interesting shops - like a restuarant I found called "Post-Mao". A lot of the restaurants have women outside holding onto menu's telling you to come inside for food - I've never seen that in NZ but maybe it happens a lot in Asian countries?

The shops in Chinatown are very cool and sell the just plain tacky through to the "cutie cutie". The other thing I loved about Chinatown was that as well as cafe's they have tea houses:) I went to a Taiwanese tea house and had some blueberry tea - Wellington needs tea houses! 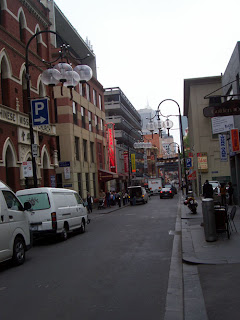 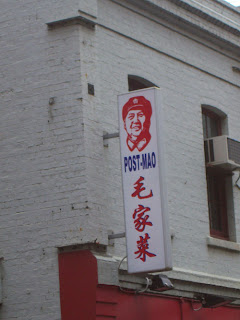 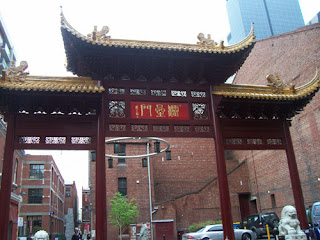 After Chinatown it was time to head for the Gaol - which is a huge and amazing looking building - I felt like I was walking around it forever until I found the entrance (at one stage I was wondering if I had the wrong building). The old Gaol is amazing but also creepy. It was the jail where Ned Kelly was executed, a lot of other people were also executed there - which did give me the creeps.

The Gaol also holds the death masks of people executed there and some are on display (including Ned Kelly's). Some of the cells are open just to have a look in and other cells have displays in them but they are all so small - I can't imagine people living in them without going crazy. The other scary thing was that originally there was no separate wing for the women prisoners - they were with the male prisoners and had male wardens - very scary stuff. Whilst I was there I managed to pick up an interesting book about women in the prison system to add to my collection. 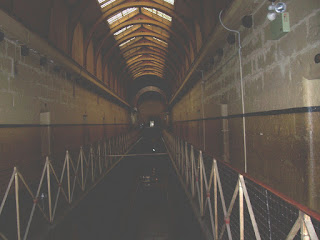 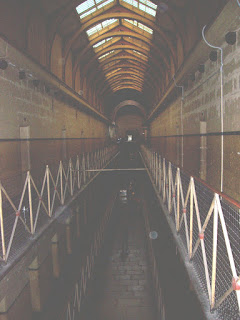 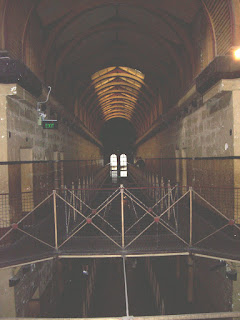 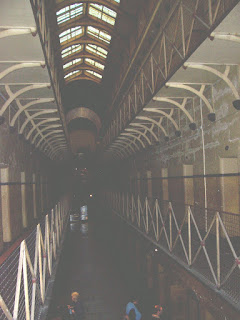 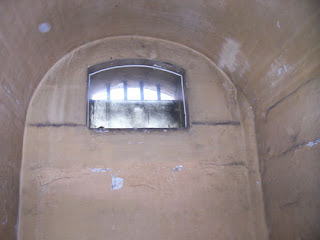 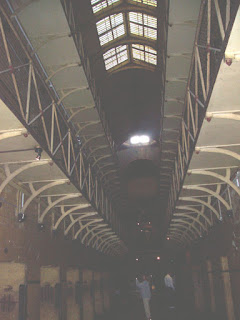 After visiting the prison I still had some time before it was time to go and meet up with Ally and I felt like I had a bit too much reality for one day so needed to do something frivolous. So I decided to go and check out Melbourne Central, which is a big indoor Mall - malls arn't usually my scene, but earlier in the day I saw a very cool shop called "Dangerfield" but it was shut - but I was told there was another one in Melbourne Central.
It turned out Dangerfield was VERY cool (I visited twice more whilst in Melbourne!). It reminded me of Illicit in NZ - lots of cute Rockabilly style clothing. I ended up buying a really cute dress - blue with sailboats on it and a few other cute cardy's and tops and some sunnies and a t-shirt for Rich!
After I left the Mall I thought I would be late back to Ally's work - because I though I was lost - but I managed to get my bearings and arrive in time EXELLENT!
When I caught up with Ally we went out to have a drink with one of her friends, and then out to dinner at a cute Chinese restaurant called "Ginger Boy" with another of her friends.
Ginger Boy was really cool - one of those places that brings out a whole bunch of different meals to share - I liked the Chilli Tofu.
After dinner the three of us went out to a Chocolate Cafe - I was restraint and only had a hot chocolate - it was SO nice. It was such a beautiful night that we just sat about on the chairs outside the cafe and chatted for a while eating our desserts.
At the end of the evening it was only 9:30 pm or so Melbourne time - but that was about 12:30 or so NZ time and I was exhaused! I SO needed sleep!
Posted by Trees at 11:09 am