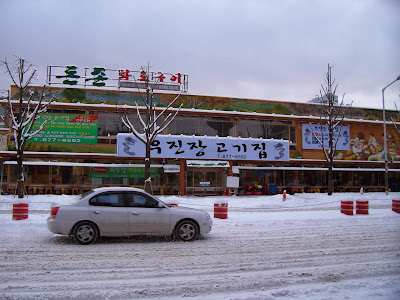 I still remeber the first time it snowed when we lived in South Korea - basically because I went crazy with excitement. Then I slipped over, but that's ok because it was snowing!

It does snow in some parts of New Zealand - but I have never lived anywhere that gets regular snow. In fact, before I went to Korea I would say I had seen snow maybe four times. So to see REAL snow that lasted for days was incredible. It felt like winter did in movies and on TV.

I took the above picture in the city we lived - Uijeongbu and it doesn't look like much right? Just a car driving down the street. But it just seemed more exciting because of the snow, everything is more exciting with snow!
Posted by Trees at 12:00 am

I love snow. I already know how I'm going to miss snow when we move to Adelaide. SIGH.

Argh! I hate the snow and all the disruption it causes here! x

Ah, I love snow! It always excites me when we get some, no matter how little, and I've always loved going for walks in it. We usually get a little every winter in south England, but not a huge amount like, say, Canada or NYC gets. We might get one or two snowfalls of half a foot or so that lasts a few days on the ground, and a handful of spells of light snow showers during the winter. Though over the last few years we've been getting more and more, and we even got a white Christmas for the first time ever in my life in 2010 or 2011! It was so exciting! Lol. Most people hate the snow, but I love it! I guess I'm just an over grown child. Haha! xx

Snow in Dunedin is hilarious, because everybody uses it as an excuse to take the day off work, even though we only get a few centimetres a year.

Yep the snow is a huge novelty to me. I love it. Xx

Being born in the middle of winter, each year I hoped and hoped it would snow on my birthday.
I finally got my dream come true in 2009 - after waiting for 34 years!!

snow fills me with rage. RAGE! it's so "magical" here right now!