Sometimes things don't work out quite how I plan

I like to plan things, I'm a pretty analytic person by nature - I like to know what's happening and when and what the likely outcome will be. If something isn't working out, I like to work out how to fix it. I'm a problem solver and I generally like routine and order.

This weekend Meg and I decided to do a sew-a-long - we bought bought the Chloe Pattern from Victory Patterns. I even had a general idea of where I was going with the pattern and what I wanted it to look like when it was finished.

I spent FOREVER on Saturday sticking together the pattern and cutting it out (my most hated part of buying PDF patterns online) but I knew once that was done I'd be all ready to go for a Sunday sewing day. 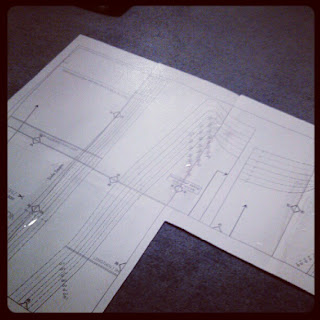 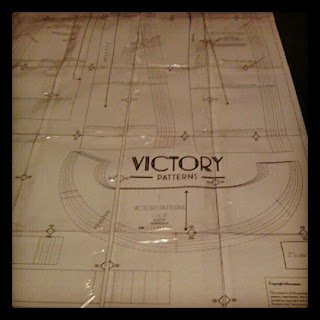 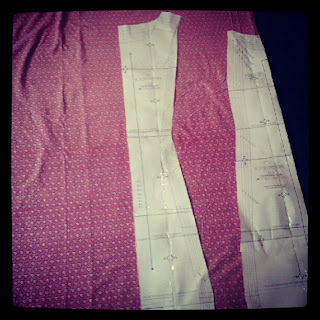 The reason why? Well its something I've lived with for years now - I've got Endometriosis. I don't really talk about it much on here as I don't like it get the better of me. In general, I'm a pretty positive person which has helped me deal with having endometriosis - I was "officially" diagnosed when I was 27 (although I had known long before that something was wrong) and I've had to have two surgeries for endometriosis.

I go to the gym quite a lot (at least 5 times a week) and I also try and eat as well as I can - the reason for this is that if I don't look after myself then my Endometriosis gets really bad. I've had times in my life where I have been in pain every waking hour and taking codeine every day and its no life at all. It's much easier to get inspired to go to the gym at 6:00 - 6:30 five times a week when you know the alternative is going to be pretty terrible.

Lately I have been much better - I've had generally 2 or 3 "bad" days a month, but they have been manageable. I've been feeling like things are under "control". Some women have the same surgery that I've had and their pain is literally gone. I envy those women! I've had two surgeries and whilst they have helped (I'm not in constant pain every day) they haven't "cured" my problem. I can't cure my problems (unless I have a hysterectomy) so I have to try and manage them the best I can.

But sometimes - it just gets the better of me, the pain is fairly terrible, that's for sure. But even worse than the pain is the sheer exhaustion. When your body is in a lot of pain for days at a time, you simply become exhausted and eventually you just have to stop and rest because there's nothing else you can do.

Today my body just told me I had to stop for a while - after I cut out my fabric, I just felt so exhausted. I just couldn't do any more. There were lots of other little projects I have on the go at the moment,  but I simply did not have the energy to do any of them. The thought of picking up an embroidery hoop and needle even made me feel tired.

Apart from the pain and the tiredness the thing that makes me most crazy about having this disease is that at times I can't control it and I get frustrated as I want to get out there and live my life but at times I just can't do the things I want to do, I HAVE to rest. I can think of times I've had to miss out events like friends birthdays and other celebrations due to my endometriosis and its been pretty terrible.

So today, rather than whipping up a new and fabulous dress, I spent most of the day looking at craft stuff on the internet and watching Community on DVD. Not exactly the most exciting day ever, but unfortunately, sometimes I have to take it easy.

Here's hoping I'll be feeling a little more like myself tomorrow and that I can get onto the "belated" sew-a-long later this week.
Posted by Trees at 6:20 pm

I hope you feel better soon Girly! One of my close friends also has the same condition, it amazes me how positive she says even when she feels like crap!

That's no good :( It's tough being female at times.
I have polycystic ovarian syndrome and stage 1 cervical cancer but I don't usually have too much trouble with it.
Hope you feel more yourself tomorrow xo

Oh sweet take care, rest and let your body recover. It is such a horrible condition that robs you of so much.
I have had many surgeries and a hysterectomy so I understand what you are feeling.
Sending a squirrel hug.
Love v

Wow, I had no idea that you have endometriosis! And, I never had any idea that it was so painful. It's good that you know when to listen to your body & take a break though. I've never been much good at that, and it's made being pregnant a steep learning curve.

It looks like your dress is going to be amazing!

Oh honey feel better!! I'm glad you opened up to tell us, but I'm so sorry you are in pain.

I was just getting on to message you that I probably wasn't going to be able to do the pattern today, either. Work killed me a little yesterday. Next weekend? :-)

Feel better, and we'll have fabulous Chloe dresses someday in the future!!

Sorry you are having a rough patch, get lots of rest, the sewing will wait till you are up for it. Hope you feel much better soon. Dealing with any ongoing condition is really tiring and frustrating, you do well to manage it as well as you do. xxxxx

Your post really touched a chord for me, its an awful condition, and I know a few women who have it or had it. It sounds like you have some good strategies for coping like going to the gym, and from reading your posts you have some wonderful hobbies are not to be underestimated either for "feel good value". I think this post is really inspirational as other readers and myself had no idea. Listen to you body and take it easy. I love reading your blog, kia kaha

oh no i didn't know you have this. i love to be in control and i know how it feels to not have that but sometimes you gotta listen to your body and just do what you need to feel better. i hope you got lots of rest and feel better now. just think how sweet your dress will be when your done! just take it easy if you need to for a while :)
sending you lots of hugs!
xoxoxoxoxoxoxo,
cb

I'm sorry I'm late to reply. I am sending you a big hug of love and understanding. I suffered from this for years and finally had my uterus removed almost 2 years ago. I feel like I got my life back. I hope you find a way to be happy and healthy sweetie. I wish you nothing but the best.
Tonsoflove~
Krista

Really sorry to hear about your illness! You always come across as so positive and I totally admire your dedication to making clothes. Enjoy your rest, I rest all the time and I don't even have an excuse :) x