A girls dinner whilst Ange is visiting.....

Last Tuesday my friend Ange was visiting from Australia - so a whole bunch of us girls - Kat, Fiona, Gina, Ange and I got together to catch up with Ange whilst she was here and hear about how her wedding plans are going (although there wasn't so much talk about the wedding plans as there was general girly gossip). It was good to catch up - as I don't know when I'll see Ange again - maybe not until she is here again for her wedding in Decemeber which is a long way away (unless I decide to take a random trip to Brisbane to visit her - although it's not on the cards at the moment!).

After dinner Fiona and I went and saw the most amazing (and free...YAH!) show in Civic Square called "Gravity and Other Myths" which was an amazing arobatic type show - it's amazing how strong these people were - both men and women - they seemed to be able to climb up anything and never ever get dizzy (there was a lot of spinning) and they finished off the performance with lots of spinning and lots of fire. It's one of the most amazing shows I've ever seen (especially considering the price). 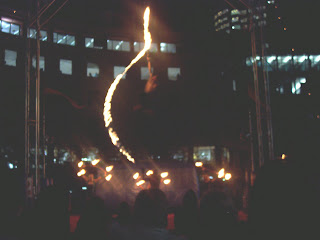