THE BIG DAY OUT!!

I finally have a chance to sit down and write about the BDO!! As per usual it was a pretty crazy day with heaps of running around trying to see as many bands as possible - although I never seem to be able to see all of the bands I want to see!!

However - the bands I did manage to see were -

I've seen these guys at the BDO for the last three years - and they are always so funny!! They had a couple of new songs as well so I guess that they must be working on a new album - my favourite new song was "History Never Deletes" too funny. Also did all the great old school songs like Beers, We are Deja Voodoo, Today Tommorrow Timaru, Feelings.....wicked! Unfortunatly for some reason - I don't seem to have a picture of Deja Voodoo - I was sure I took one or two - but I must have forgot - bummer:(

These guys were for the States and I had never heard of them before the BDO - but that's what the BDO is all about I guess. They had quite a bluesy sound at times - and a song that sounded a hell of a lot like Tom Petty - they were pretty entertaining all around - their performance didn't make me fall in love with them and want to go out and buy their CD or anything but quite cool:) 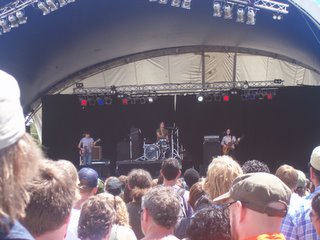 I love Pluto - they are one of my favourite kiwi bands - I remeber the first time I saw them with with Rich at Altitude in Hamilton and there were only about 20 people there - I remeber thinking at the time that it really sucked as they are such a cool band! But a lot more than 20 people were watching them at the BDO and they were on one of the main stages too which was cool. Played a whole bunch of songs from Red Light Syndrome and Pipe Line Under the Ocean. Very cool. 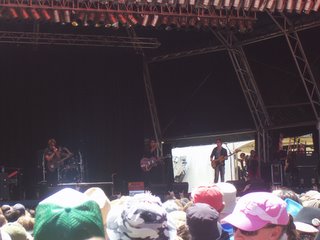 After Pluto we decided to go and eat before it was too late to do so - we also managed to catch Sue & Sarah over at the food tents as we had lost them at the markets when Sue went to buy some ear plugs.

After lunch we hung out about a bit - saw a bit of Sleater-Kinnley but we weren't that close - just hanging out at the back - we were going to see the Magic Numbers - but there seemed to be a huge influx to see them so decided to give them a miss as we weren't totally bursting to see them or anything.

We decided to head over to the homegrown stage and see what was happening.

While we were over at the Homegrown stage The Bats played - which was awesome! Old School Flying Nun - there's nothing quite like it! When they played North By North I was so excited - there performance was wicked -I was so glad we went and saw them. 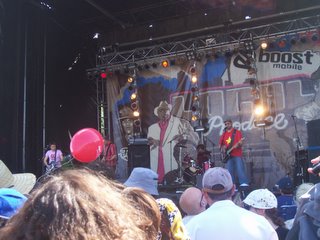 The Go! Team was another band that I had never heard of before - and they were so awesome!! There were a whole bunch of people in the band (apparently the two guys from 2 Many DJ's are part of the go team as well) - they had loads of instruments - two drumkits! and an awesome front woman who could not only sing but was also a wicked dancer - I will buy these guys CD because I thought they were wicked! 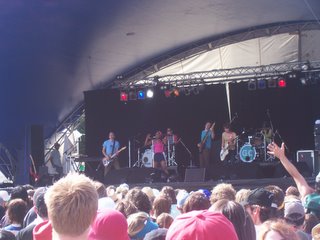 When we showed up at the Brunettes there seemed to be like a million people on stage with all sorts of crazy instruments - so it was an extended Brunettes line up. There performance was really good but short because the front man seems a bit like a troubled musical genuis or something - he kept of running between the sound desk and the stage trying to get everything sorted and also kept on looking over the sound desk guys during the performance...so it was a while before the band actually started playing. My favourite part was when the band put on Mary Kate & Ashley Masks - nice. The worst part was the crazy off his face that came and danced in front of us as if he was at a rave (The Brunettes bubble gum pop is not raving music!!) and exclaiming to his mate loudly - "it's like cool how they have a full orchestra and shit eh..???" - why must the crazy people always dance in front of me!!! 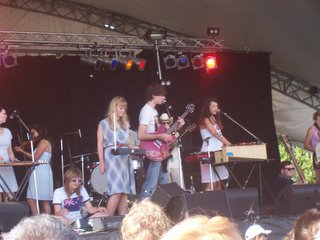 After the Brunettes decided that we should really eat before we take on the Franz Ferdinand/Iggy Pop/White Stripes - as it was pretty clear that the rest of the night was going to be pretty full on!! So after waiting for what seemed like a million years for a chicken pita bread and drink - we finally caught up with the rest of the posse and headed down to check out Franz Ferdinand.

I think that Franz were my favourite band of the BDO - their performance was so well polished they were awesome and when they played "Take Me Out" the whole crowd got into it. I was also wicked when the drummer started playing the drum kit backwards....very cool - only problem was yet another off his face munter in front of us - how do we attract these people!! 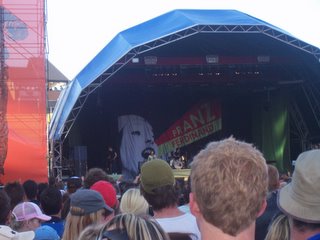 This was wicked - all I wanted to hear him play was "I wanna be your dog" and they played it twice - too cool. Especially when he pulled a whole bunch of people from the crowd up to dance with him on stage - some people have all the luck! 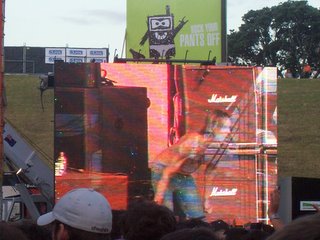 The White Stripes are a band I have been wanted to see for ages - there was talk that they might not come to NZ as Jack White had hurt his throat or something and had cancelled a whole lot of post BDO gigs - I think this is why they left the stage mid set and had everyone thinking "what is that it??!!". They did their version of Jolene - which I've heard a bit about and it was very cool. 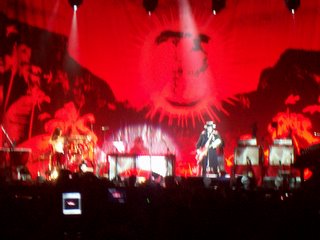 After the White Stripes decided to head home - and in my case - recover from some bad sunburn - ouch!!