Yes summer DOES exist in Wellington

I was seriously beginning to doubt that summer existed in Wellington - especially when I had soup and a hot chocolate for lunch last week!! Soup for lunch in January - that's crazy talk!! But now I finally feel like I can wear my Wellington t-shirt without being totally ironic - 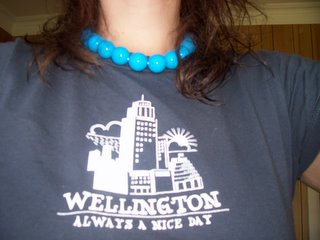 In fact the weather has been so good that yesterday Rich and I decided to go to the beach for the day - we've already spent heaps of time up Kapiti way lately (with spending four days at Paekakariki over new years) so we decided to head out to Island Bay instead.

We've only been out to Island Bay one time before and thay was for Rich's birthday last year - so it was cool to go back again. The thing I love most about Island Bay that I haven't come across at any other Wellington beaches so far (but I have only been here six months) is rock pools!! 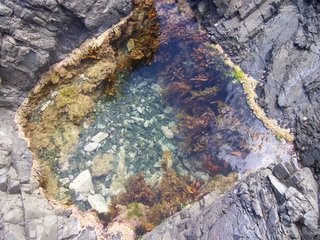 I love rock pools!! We spent most of the afternoons having a look around the rock pools but didn't find ay particulary interesting creatures.....but still it was fun.....and I actually got sunburnt yesterday - which isn't a good thing but it is surely a sign summer is here!!

Well today is my first day of holiday (if you don't count the weekend that is) and I don't yet have any major plans for the next three days....I actually got up surprisingly early today - I was at the gym at 8:05am!! I guess it's because I woke up when Rich woke up for work so I figured I may as well get up at the same time and go to the gym - shocking start to a holiday - but at least I had all my exercise for the day done at 9:00am in the morning. Leaving the rest of the day free to do whatever else I want!!

I'm going to meet my friend Jess for lunch at 1pm, then I thought I might head out to Porirua and go shopping for my brother birthday present out there - just for a change to the city.....although I'm not exactly sure what to get a 16 year old boy for his birthday - even if it is my brother.....hummm......

Well best be off to do whatever I feel like.....YAH HOLIDAYS!!