On day two of our stay in Manila, we decided to start the day by visiting the Chinese Cemetery which is one of the most fascinating places I've ever visited. 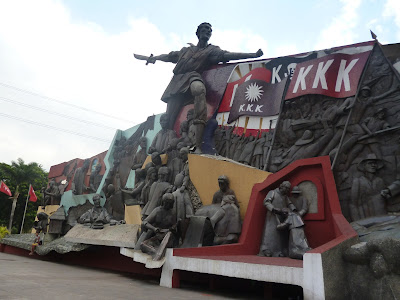 We had to travel there via the train system which wasn't too far from our hotel, but there was so much to see on the way there! Heaps of people, scooters, jeepney and market stalls. There were stalls everywhere!

On the way to the subway station we saw this amazing sculpture/memorial to Katipunan - which was a Filipino revolutionary society founded by anti-Spanish Filipinos in the late 1800s. This history of The Philippines is so amazing, I felt like I learnt so much in our short trip but I really want to know more (and go back and visit again!). 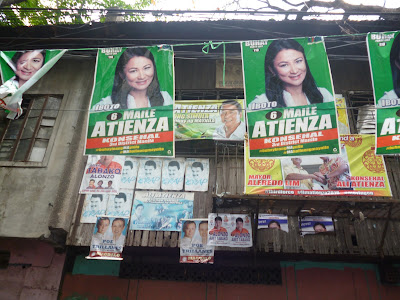 We were visiting The Philippines in the lead up to an election, so there were electoral posters everywhere. 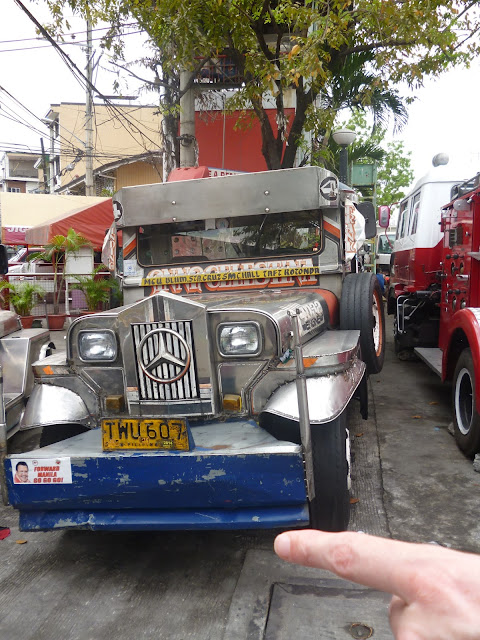 In case you're wondering what a jeepney is - well this is a jeepney - these pimped out jeeps are a form of public transport in Manila and their kitsch level is off the scale. Also somehow Rich's finger got in this picture! 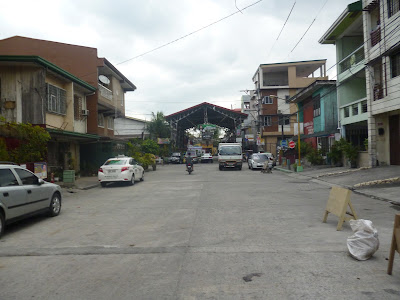 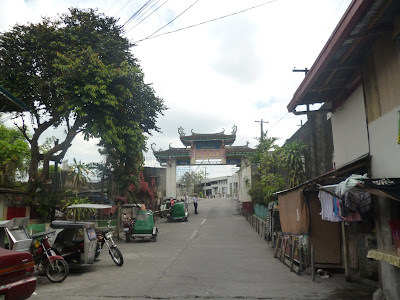 One of the nice things about visiting the Chinese Cemetery was that it isn't a tourist attraction, I'm not one to put down tourist attractions - I love anything cheesy and over the top but it's also nice to see a bit more of real life as well in a country you're visiting.

The other great thing about visiting is it showed use just how nice Filipinos are, I don't think they get many white people in this area and everyone asked us if we were looking for the Chinese Cemetery and were happy to show us the way. There were a few kids in this area that were so excited to see us too - I felt the back of my skirt snag and I thought I had caught it on something, but when I turned around there was and excited little girl staring up at me saying "Hello!! What's your name" when I told her she just looked so happy and excited I was talking to her. 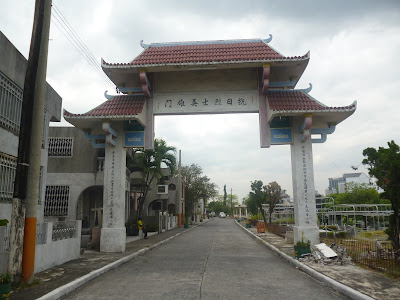 The entrance to the cemetery was marked with a Chinese gate, you may be wondering, like I was before our visit - why weren't the Chinese able to be buried with everybody else? Why do they have their own cemetery? Well it turns out this cemetery is the second oldest in Manila and it was built as Chinese citizens were not allowed to be buried in Catholic cemeteries during the Spanish colonial period.

When you arrive at the cemetery, there are guards and you are offered a tour guide, however we chose to go it alone. 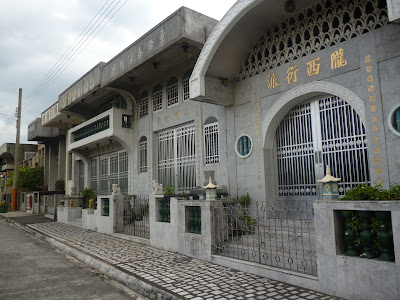 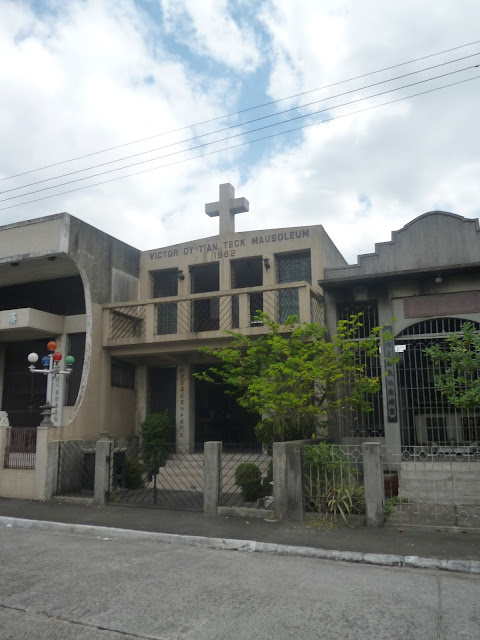 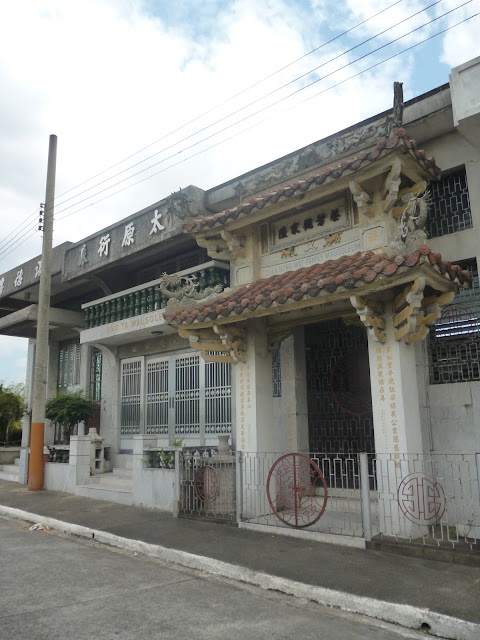 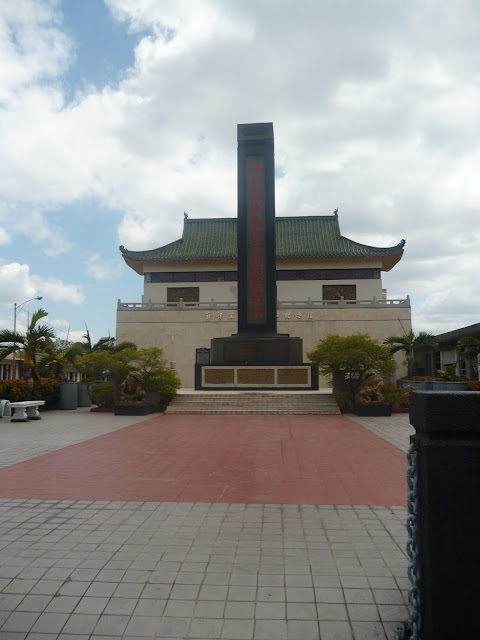 So here's the thing about the Chinese Cemetery - people don't have headstones, they have whole buildings. Some look like modern apartments and others traditional Chinese buildings and there is A LOT of them. Some have gardens and fishponds, we saw one that had caged birds and I read in the Lonely Planet some are even air conditioned for when family come to visit. 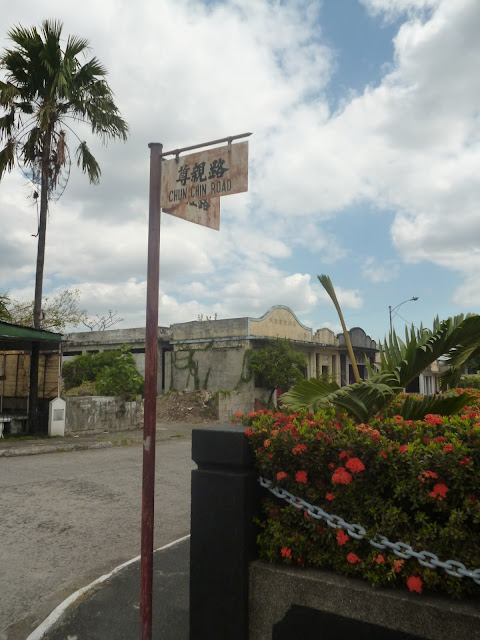 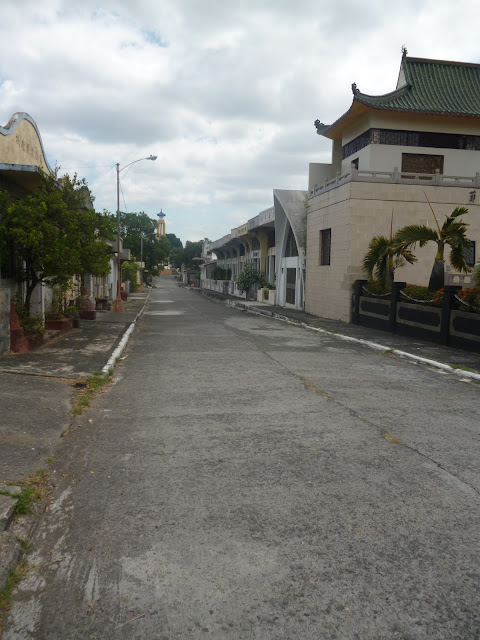 Another thing is this place is so huge it has its own roads and street signs, its like a city for the dead. You could get lost in this place for a few days and always have more to see. The cemetery was pretty quiet, but there were a lot of caretakers around sweeping and picking up rubbish. There were also a few builders working on various buildings/tombs and quite a few people at work cleaning out the tombs. 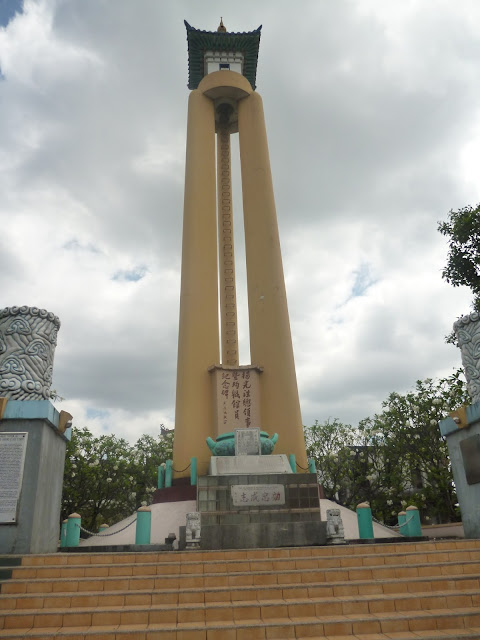 This impressive monument is in the memory of the Chinese Consular General and his staff who refused to leave The Philippines when it was invaded by the Japanese during World War II, they were all executed by the Japanese and their remains were later found and buried in the cemetery. 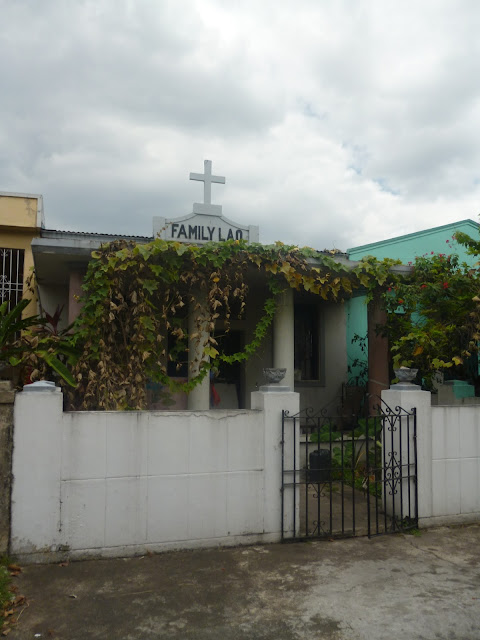 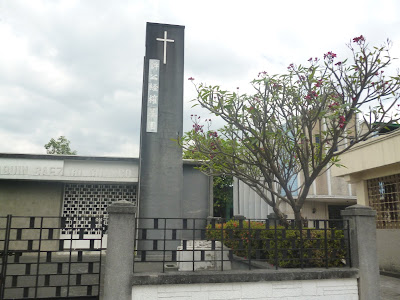 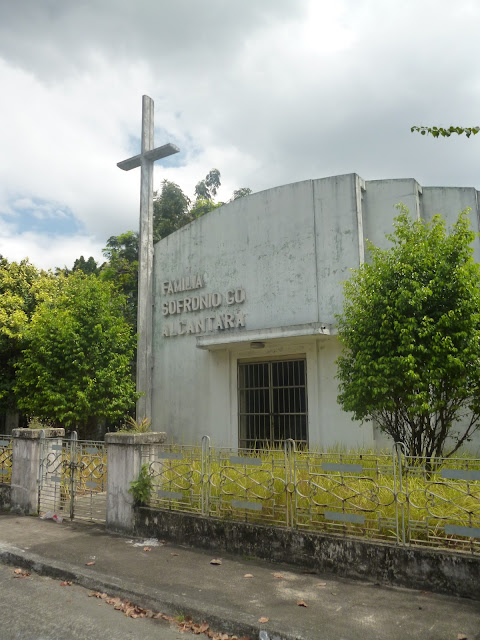 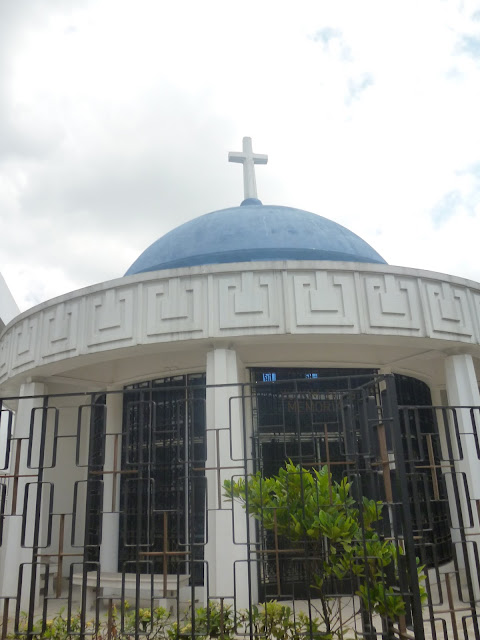 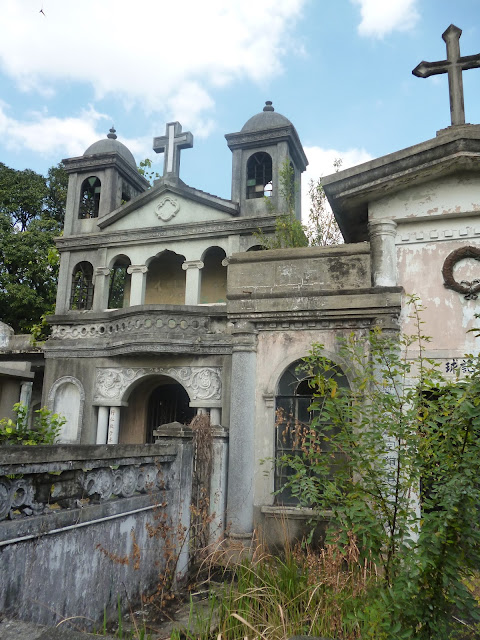 There was a lot more Christian iconography at this cemetery that I thought there would be - as you can be from some of these pictures some of the family plots were better taken care of than others. Also there were people living in some of these buildings, which is a hard thing to take it, the thought of living in a final buried place of the dead may wrong.

However, if you're desperate I can understand why, at least you would have shelter from the harsh sunlight during the day. Also while some of the buildings were looked after really well others were derelict. I guess in some cases a family line has died out and in others the family may have moved to another country and can no longer maintain the buildings.

It also has to be said that many of the buildings in the Chinese cemetery were in better condition than the buildings we saw people living in outside the cemetery gates. 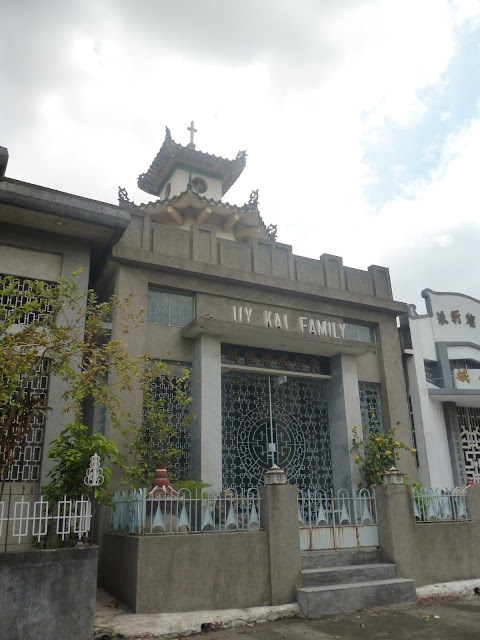 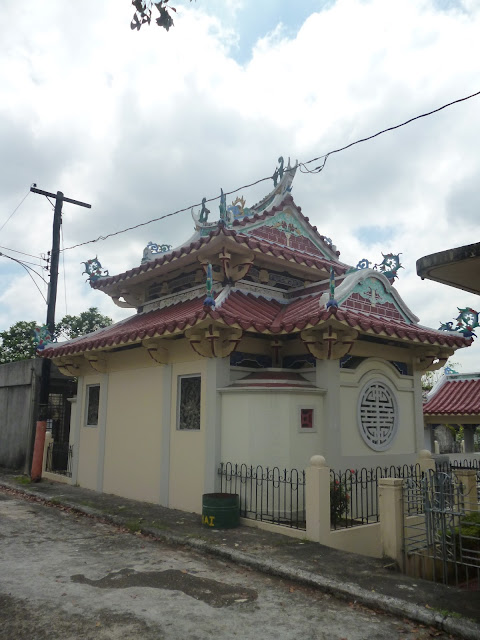 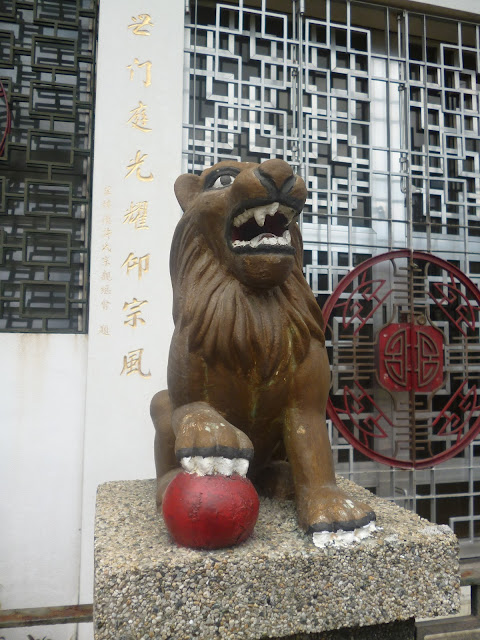 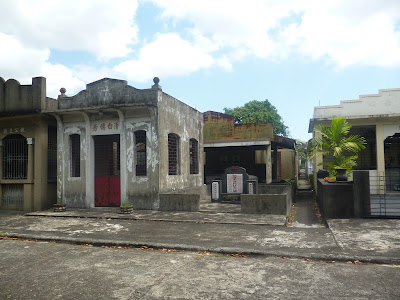 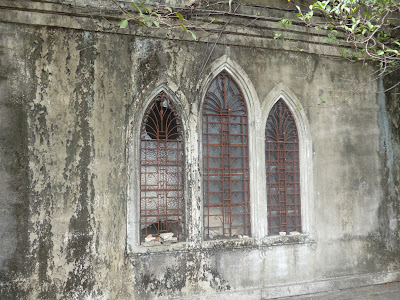 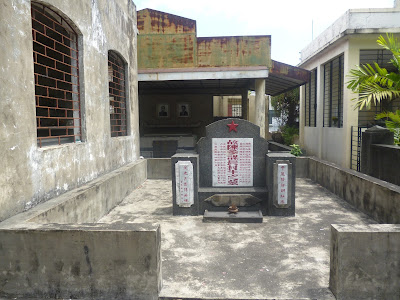 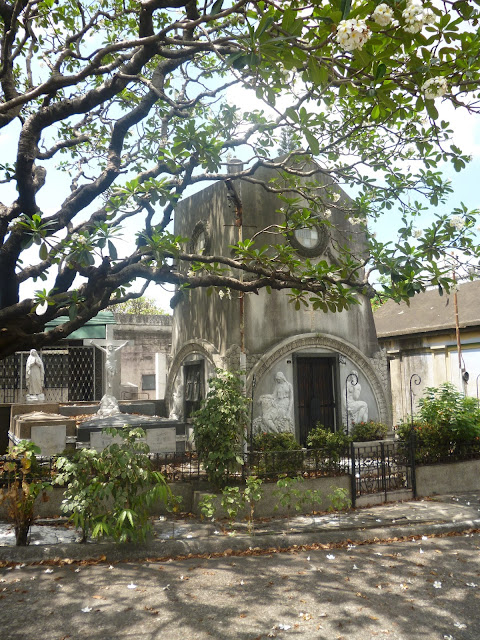 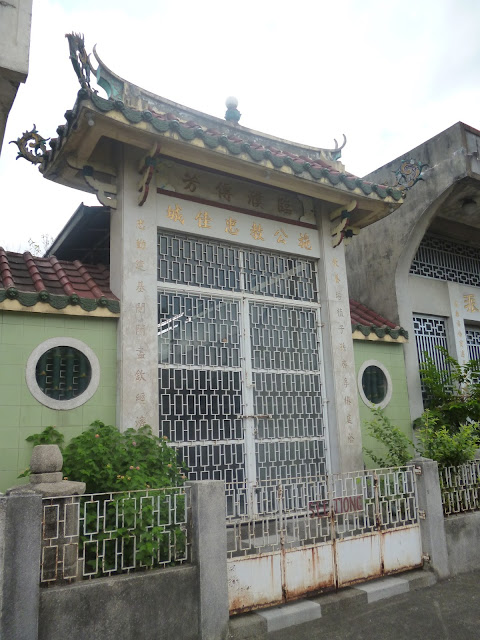 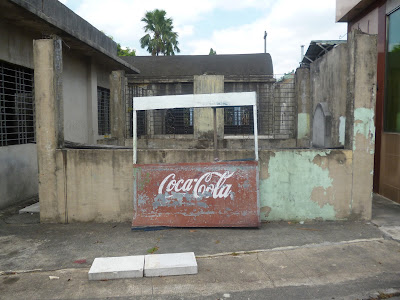 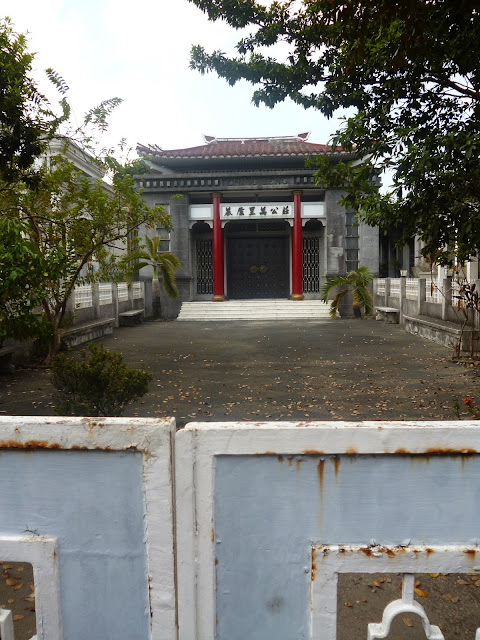 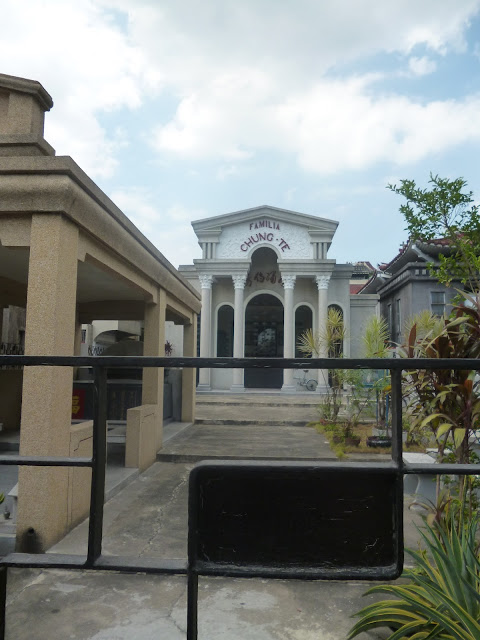 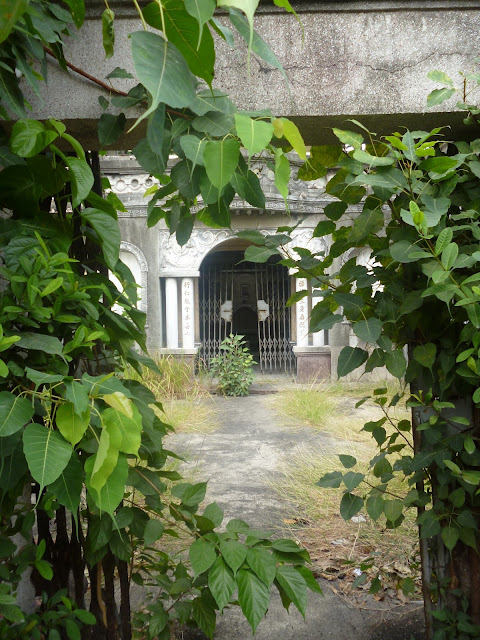 I know hanging out in a cemetery may not be everyone's idea of a good time, but I've always found cemeteries fascinating and this one particular is incredible. It may not be a "tourist attraction" as such, but if you are ever in Manila you should really visit the Chinese cemetery.
Posted by Trees at 6:30 am

I love visiting cemeteries, but I've never seen or heard of anything like this before. My jaw is actually on the floor after reading this post! Such a fascinating way of laying people to rest and honouring their deaths. It must cost the families so much money to build and maintain these buildings. I wonder if that could be a reason why some people end up living in them? Hopefully one day I'll see it or a similar Chinese cemetery for myself and learn a little more in person. xx