I'm a little late with my New Years post, but I hope you all had a lovely New Years. Ours was spend in Blenheim in the South Island, I will share some photos at a later time because today its all about resolutions. Well I'm not so big on resolutions as such, so let's say its about "stuff I want to do in the next 12 months" instead.

I thought before looking forward, I would look back at what I wanted to do in 2015. At the beginning of 2015 I said I wanted to focus on creativity during the year. My goals were the following:

I think I really nailed this goal, I did a LOT of cross stitch last year. A lot of my friends received cross stitch as a present during the year and I also did quite a bit for craft swaps. 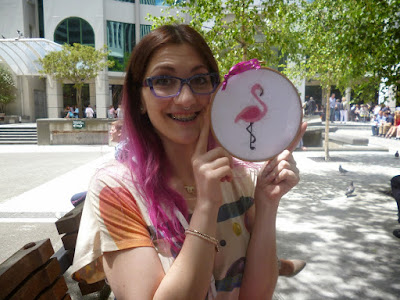 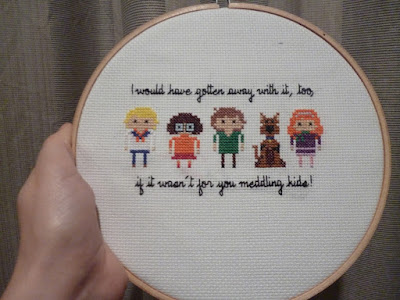 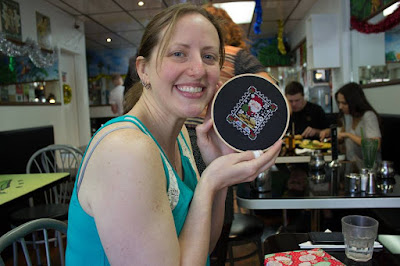 I was actually pretty good at doing craft swaps at the start of the year, but after we came back from our trip to the USA I kind of lost motivation (I did of course do my annual Halloween swap with Vany). I'm hoping to do a craft swap a month this year but will see how I go!


Tackle the terrifying UFO and mending pile
I did finish up this dress, but otherwise, this was pretty much a fail!

Sew more from my stash & sewing for others
In 2015 I made 22 wearable items, which isn't so bad given there were about three months mid-year I didn't really sew at all. Of those 22 items seven were made for other people. I made Rich a robe and all the rest were either for my niece and nephew or things I made for friends children. I STILL haven't made Rich that shirt I wanted to, but I cut it out at least - baby steps right?

As for what I want to do this year - well I have a few ideas:

Learn to be confident with button holes and make Rich THAT shirt
Rich has been waiting for his shirt for a while, but I am one step ahead of where I was last year in that I have actually cut the shirt out from this pattern. I have done the odd button hole here and there when making skirts, but I need to be more confident with them so I can make Rich's shirt and also some shirt dresses for me. I know the only way I will get there is with practice, so I just need to do some buttonholes!
No new fabric
So this is a big one for me, I really should not be acquiring more fabric as I have so much. Like a wardrobe and a book shelf full. I really don't need anymore! I've decided not to buy any more new fabric (including second hand fabric). However, if people gift me fabric or I get it from a fabric swap then that fits within the rules.
Also if I want to make something I don't have any suitable fabric for I can buy it - for example, I really want to make some sports bras from this pattern and I can  hand on heart say I don't have any fabric in my stash to sew sports bras from. So when I do want to make it I can purchase some fabric.

I  feel like no new fabric and button holes are big enough crafty goals for the year, well really, no knew fabric is a big enough goal for me. In general I want to just sew more things this year!

I also have a few non-crafty goals as well:

Do you have any goals or just things you want to do in the next 12 months?

Your embroideries are incredible! I officially suck at them- always in a tangle!!!
I really need to get back to trying to use the sewing machine- I made a lovely skirt (supervised!) in the summer and I'm afraid I've forgotten how to again!


Thanks for your lovely comments, it was so nice to see those!!!
Be careful to let the student loan people know you've finished. I say this because I knew I would be finishing paying mine off in 2014 and I noticed in 2015, I was STILL paying out £300 a month. I phoned the Student Loans company and I'd overpaid by £1200 as my local authority or Inland revenue or someone hadn't stopped it! Of course I got a rebate but still I could have been earning interest with that money!x

p.s. are you on GFC or Bloglovin? I can't seem to see a button anywhere!!!!x

You made so many amazing cross stitches and clothes in 2015! I loved seeing all of them! I'm sure you'll make loads of awesome new ones this year, and easily tick everything off your list, too. xx