Last Friday was Ria's birthday and we decided some time back that on the Saturday we would go and have some kind of adventure. The question was - where to go? There are so many options for fun times in the summer months. We decided on something a little out of the ordinary and took a trip to Carterton to go lavender picking! Thankfully Carterton isn't too far from Wellington, so we didn't have to get up too early! These photos make everything look a bit bleak, but it did turn into a beautiful day. 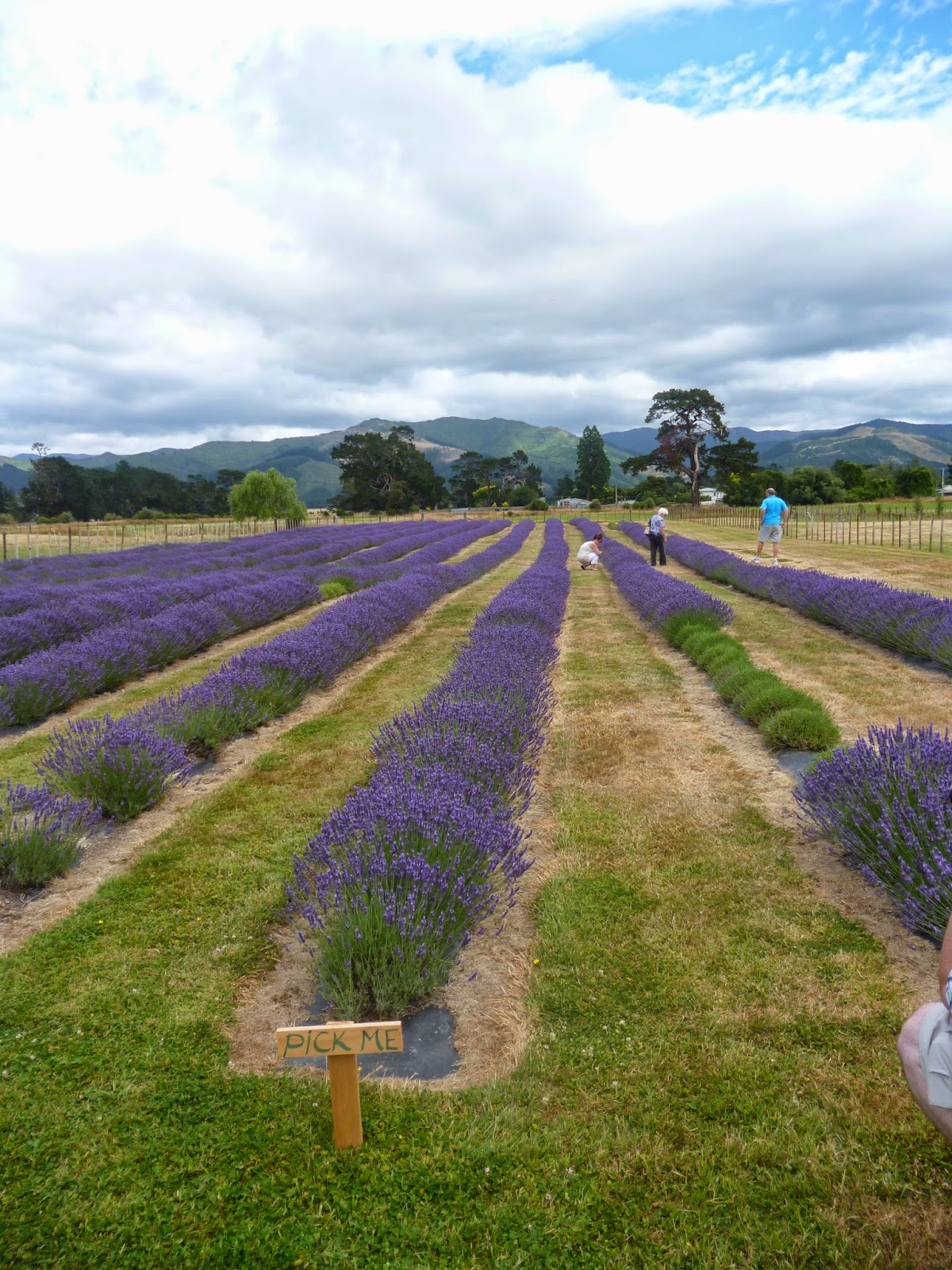 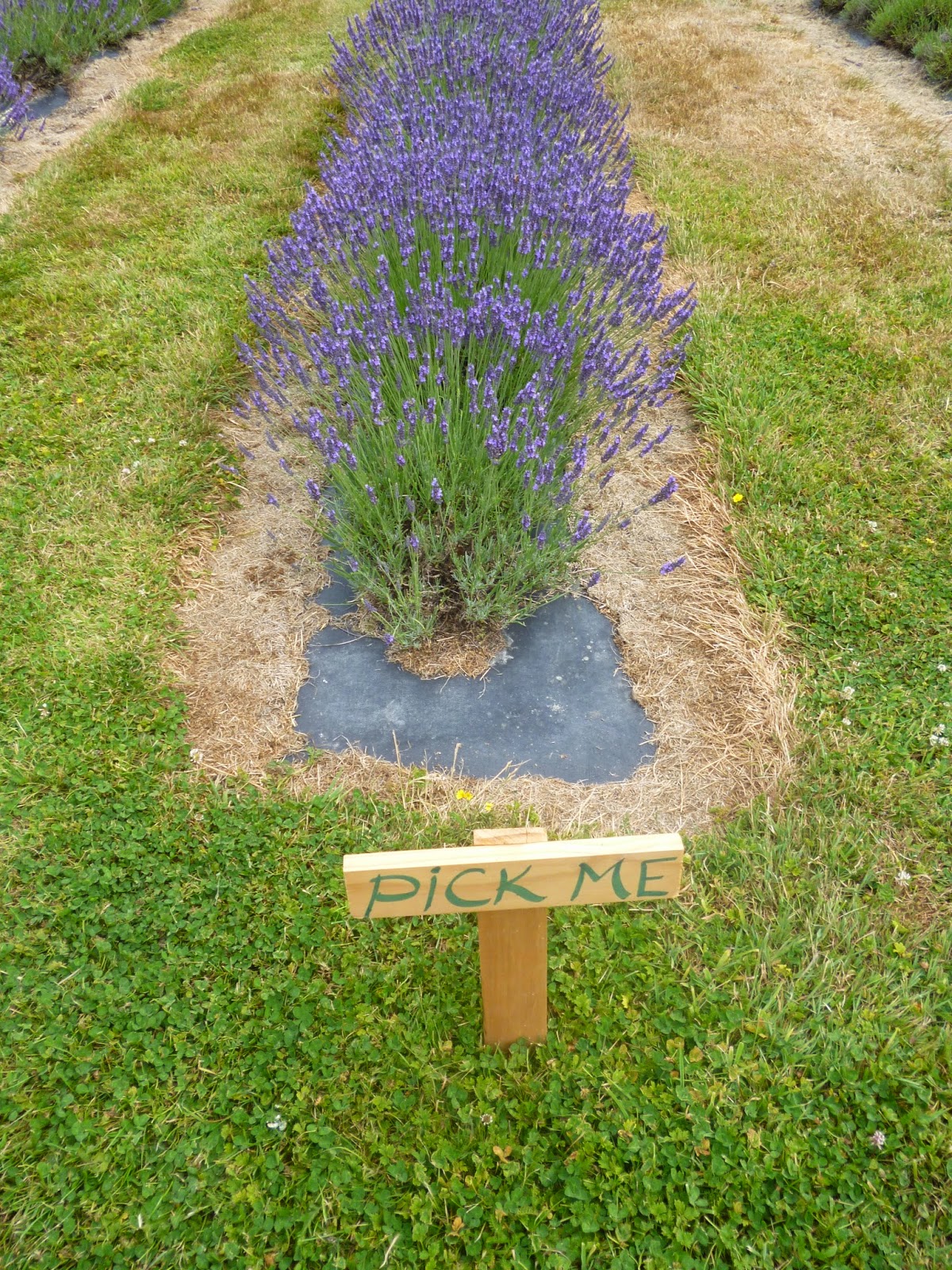 The lavender farm we visited was called Lavender Abbey they sell all kinds of products (we bought tea and culinary lavender) and have a couple of weekends a year where people can come and pick their own lavender. For $5 you get to pick one bunch, there didn't seem to be too many rules around how much lavender is in a "bunch" - we were given a pair of scissors and a rubber band and told to go for it! 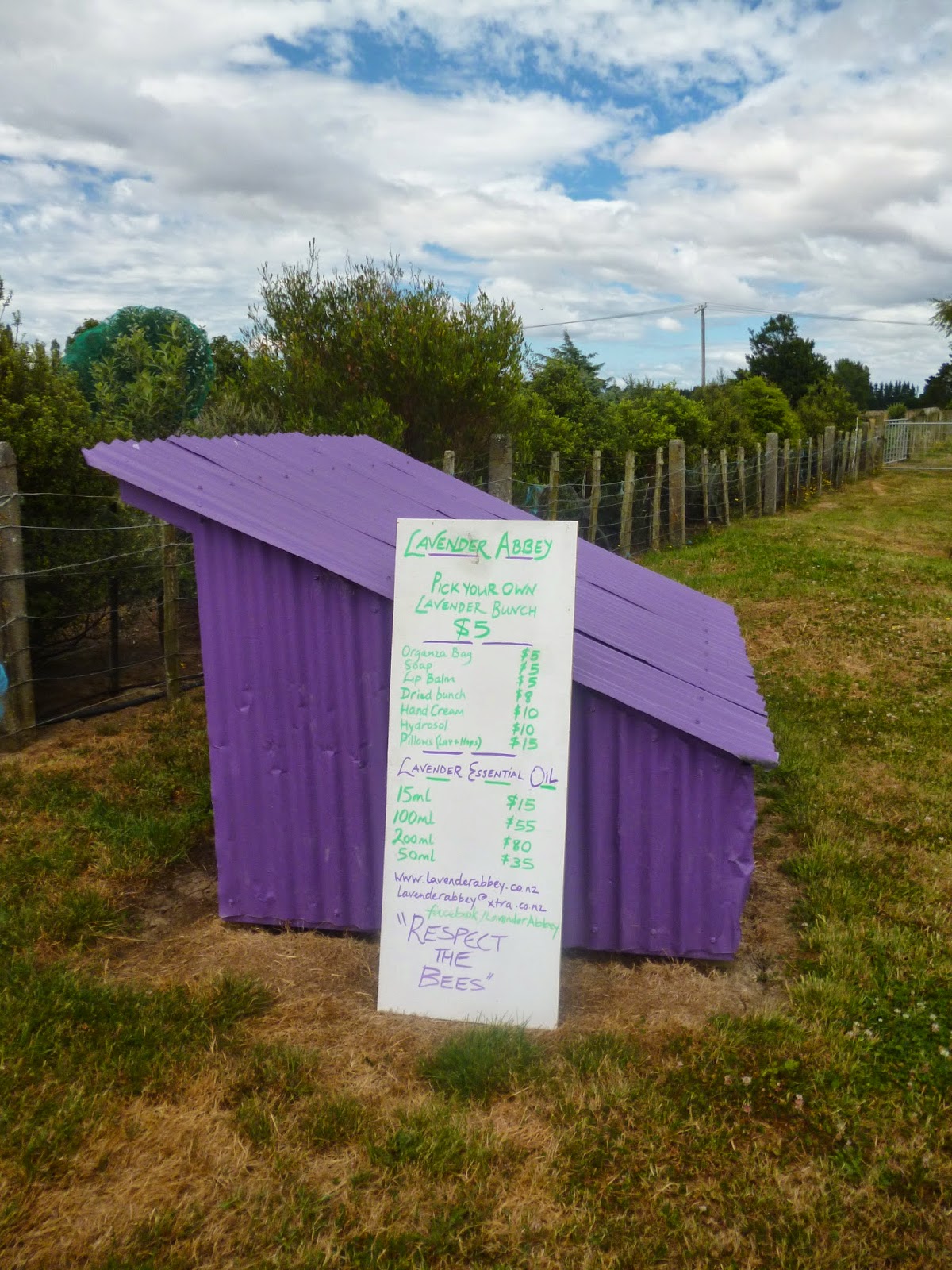 One thing I didn't realise about lavender is that bees freaking love it! Once you're in the lavender field all you can hear is the buzzing! The first time I realised just HOW MANY bees there were was when Ria took this photo - I may be smiling, but I'm thinking "holy crap I'm surrounded by bees". 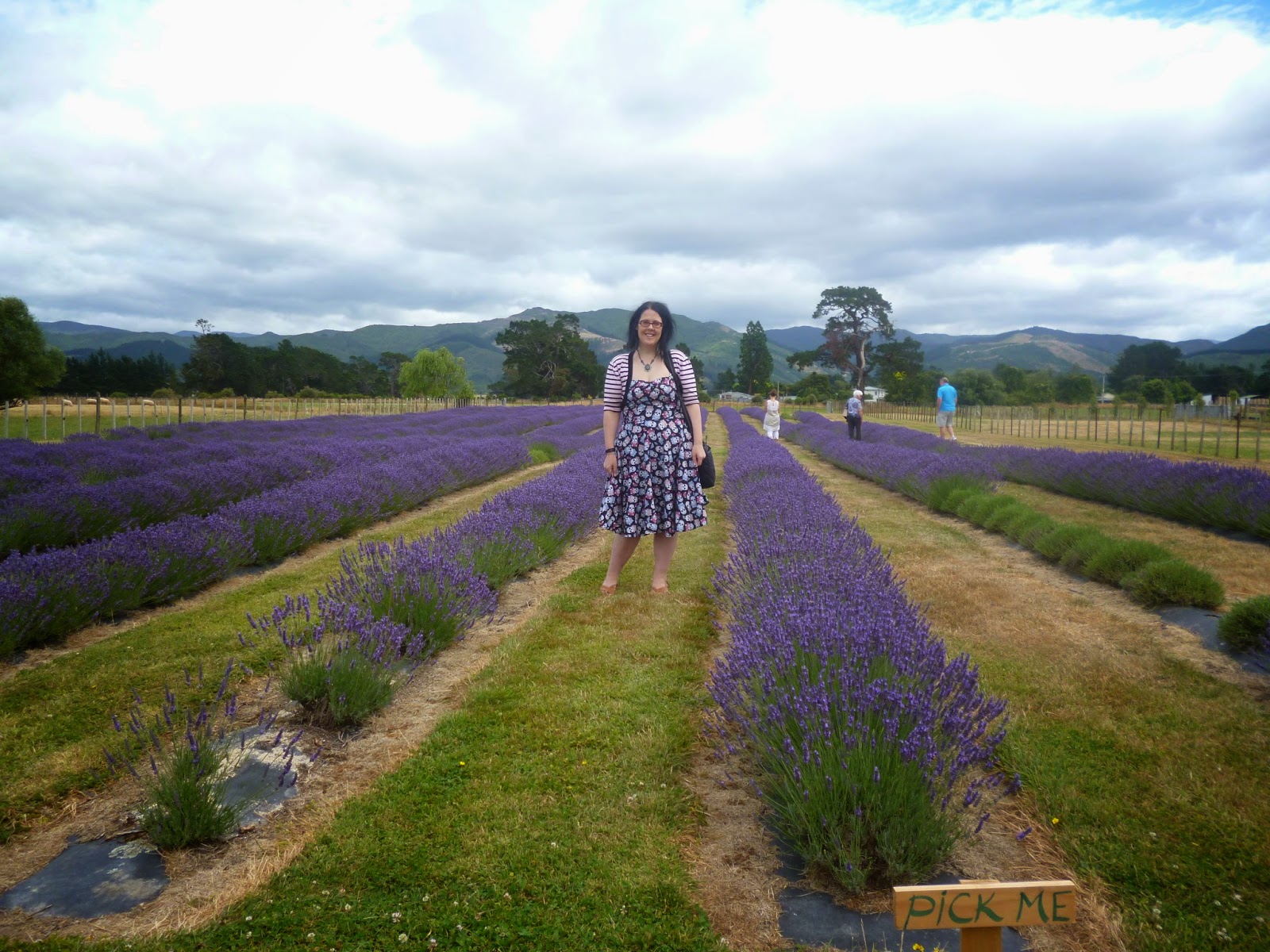 I have to say if you're allergic to bees or have a bee phobia then lavender picking may not be for you. 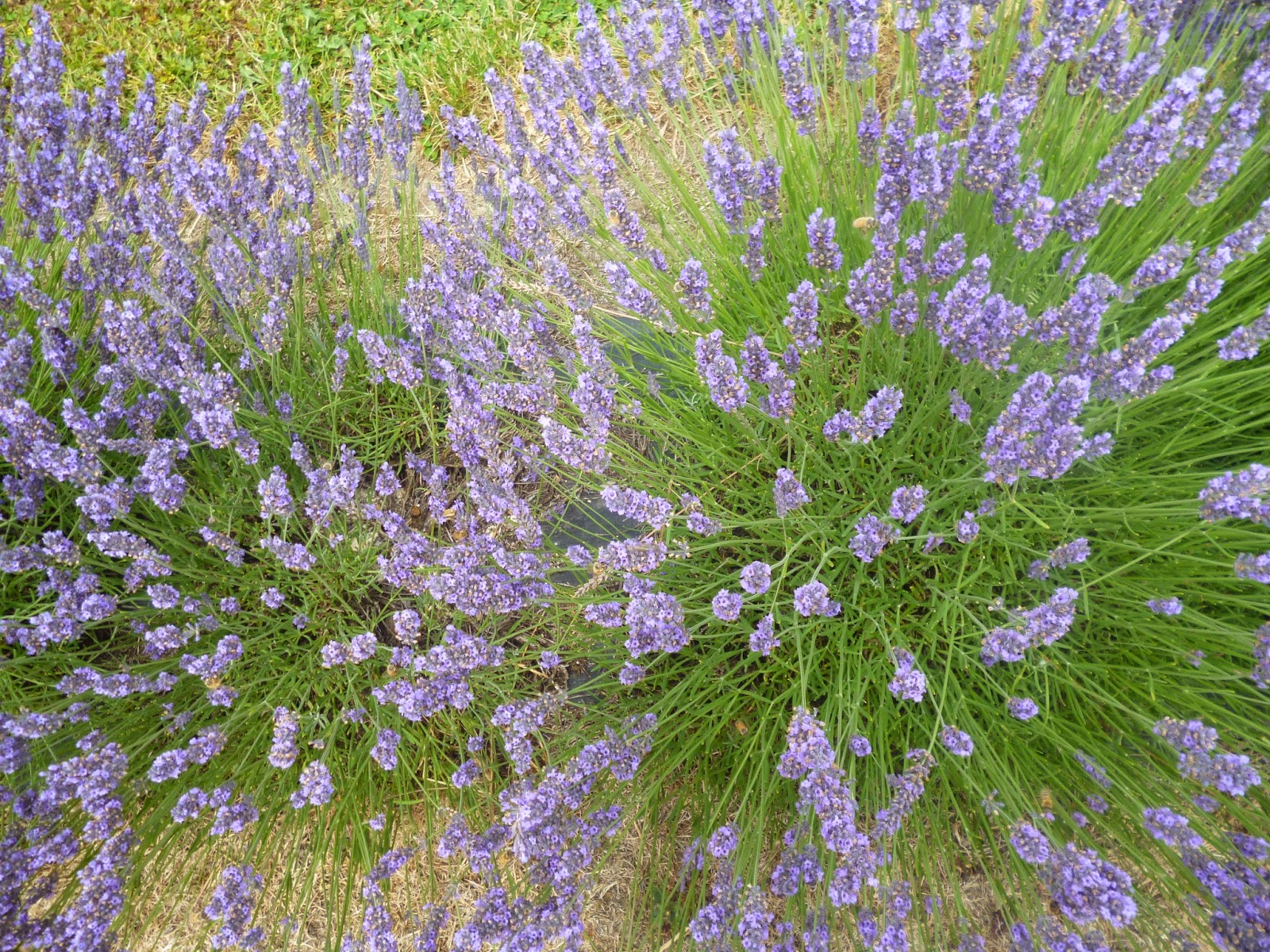 Once we actually sat down and started picking the lavender we found the bees were actually pretty easy to avoid, sure they were noisy, but if you left them alone they were so busy doing their thing that they didn't worry too much about people. 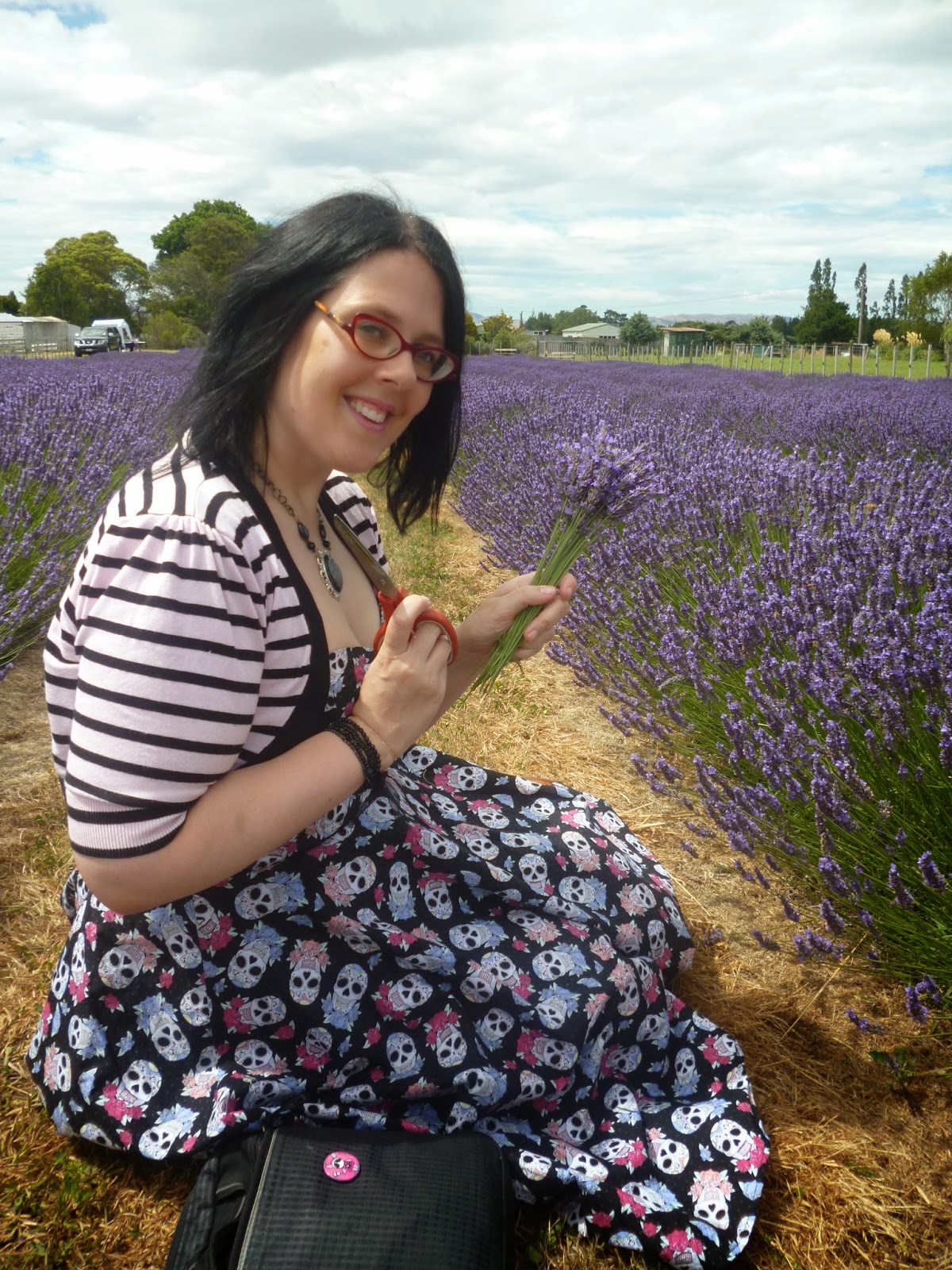 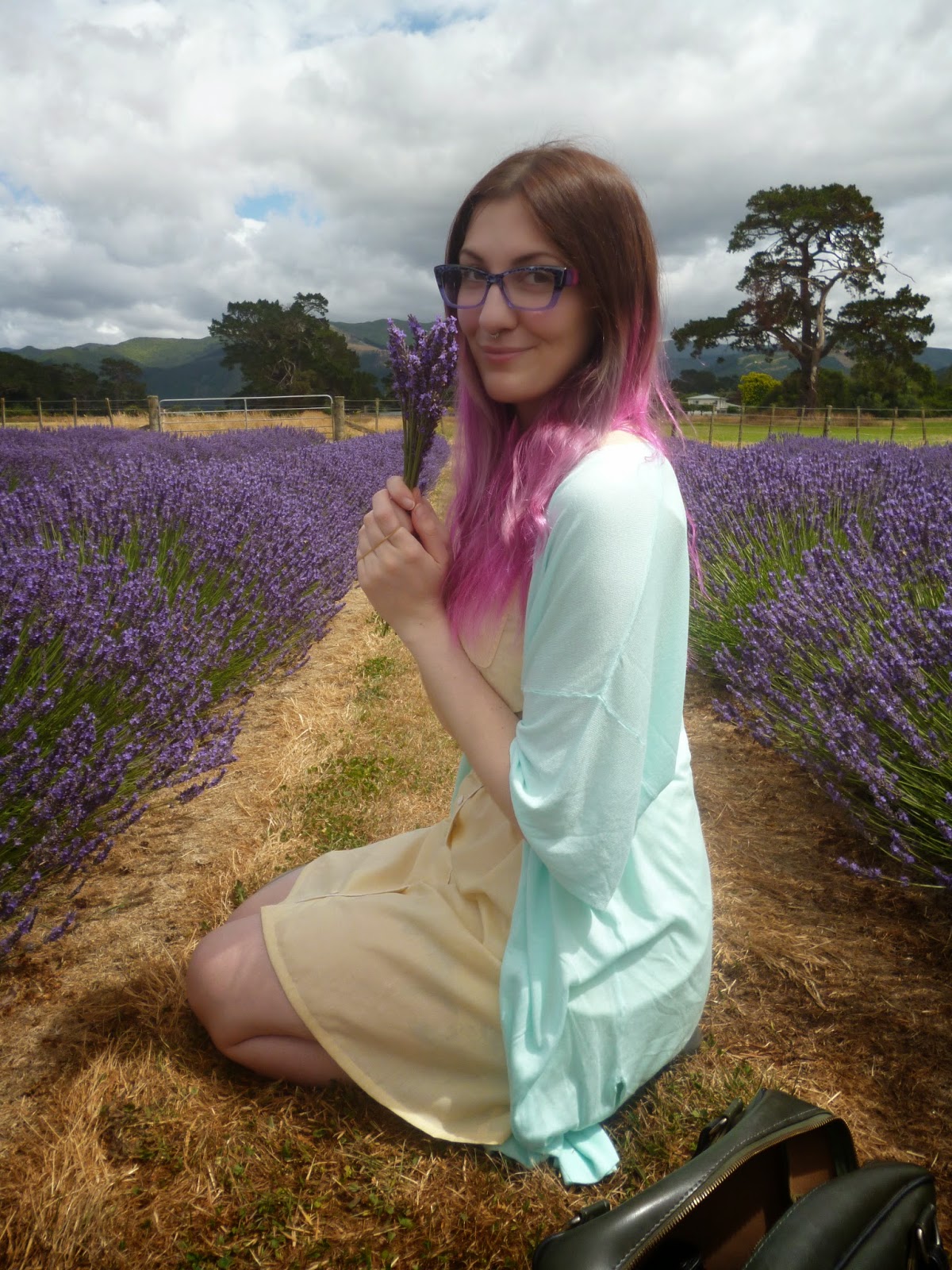 I have to say it picking lavender is super fun and makes for great photo opportunities. How often do urban girls like us have the chance to hang out in the fields picking lavender? Pretty much never. 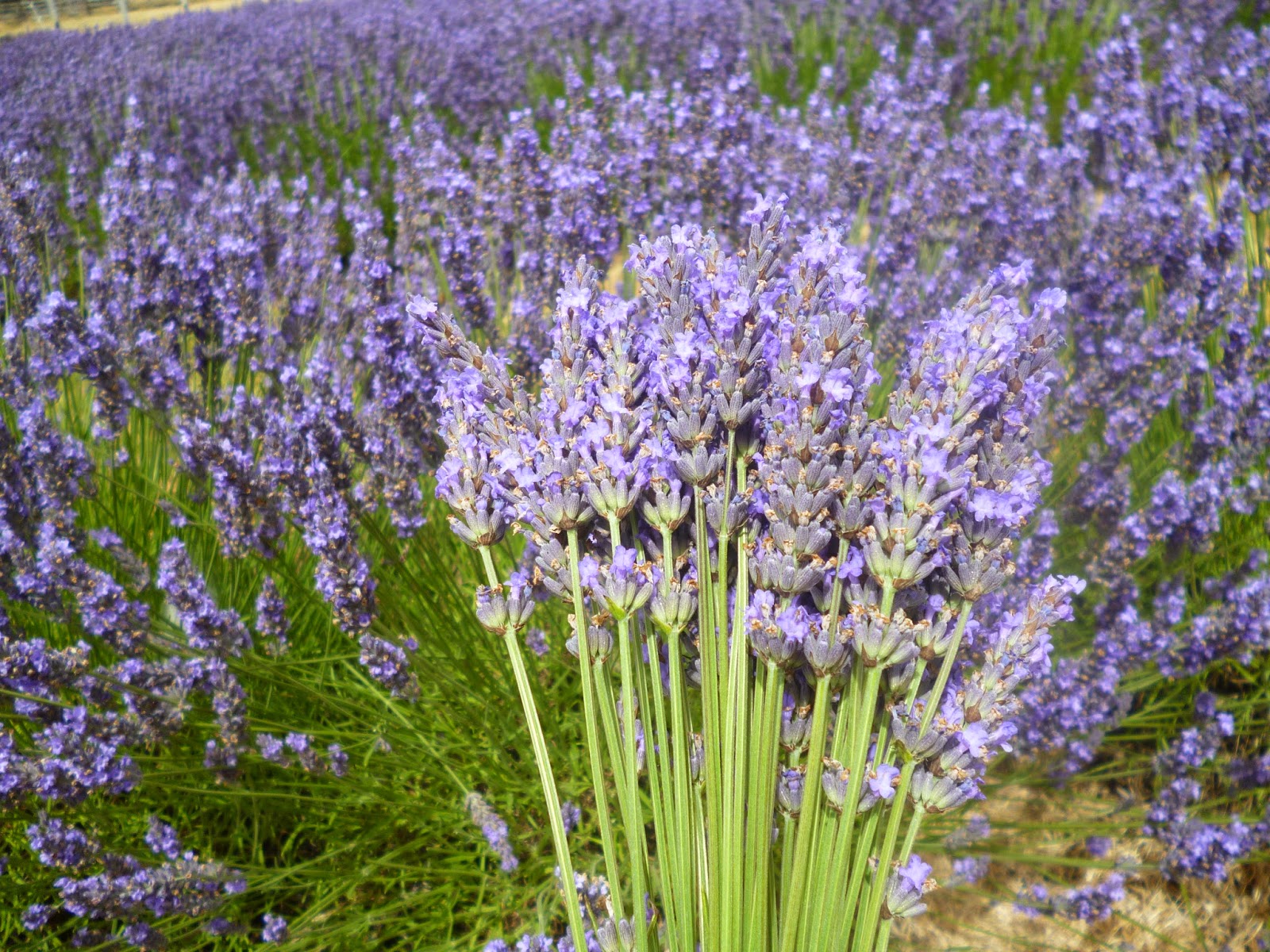 In case you were wondering - yes it does smell amazing when you are hanging out in a lavender field. 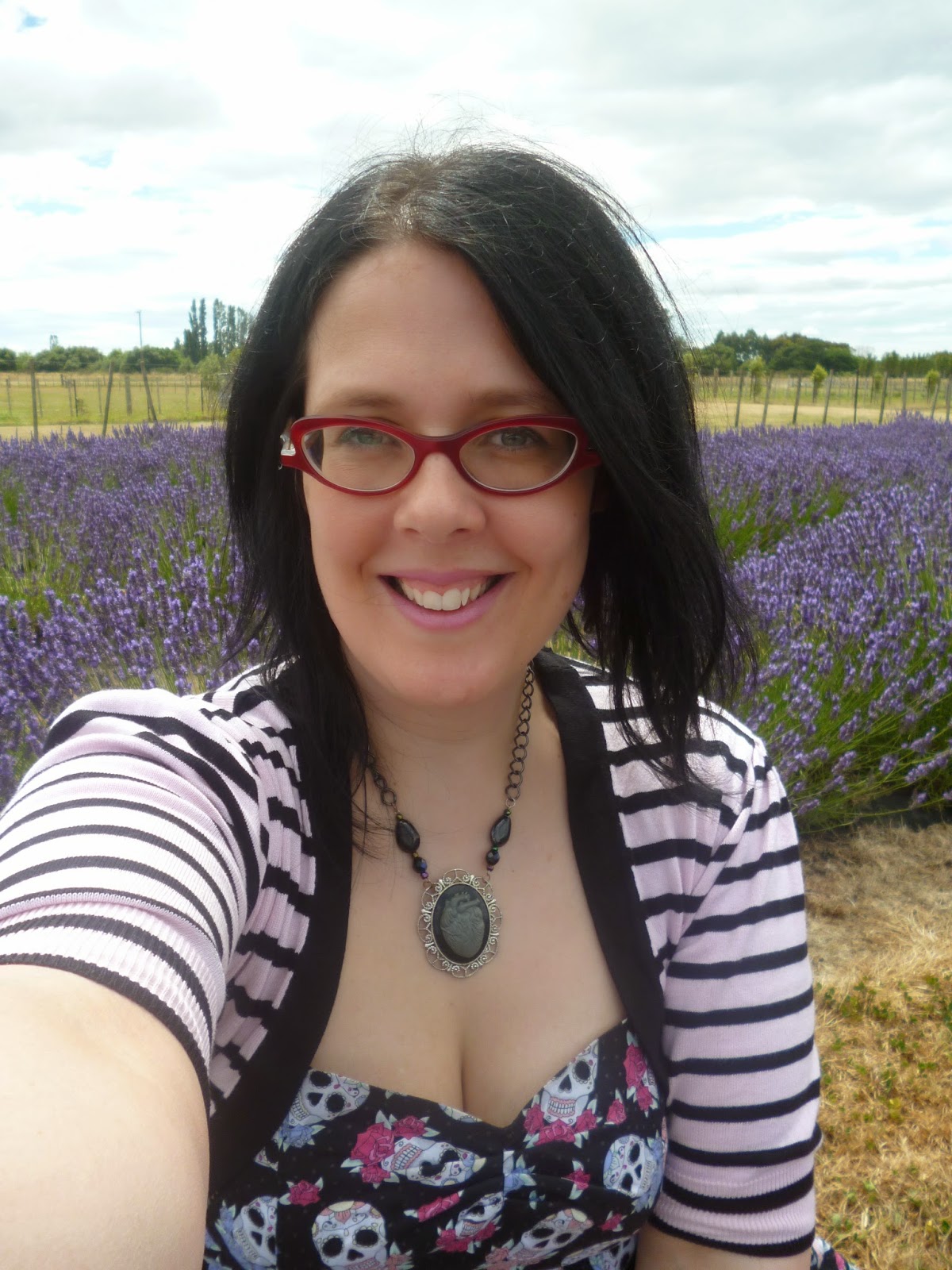 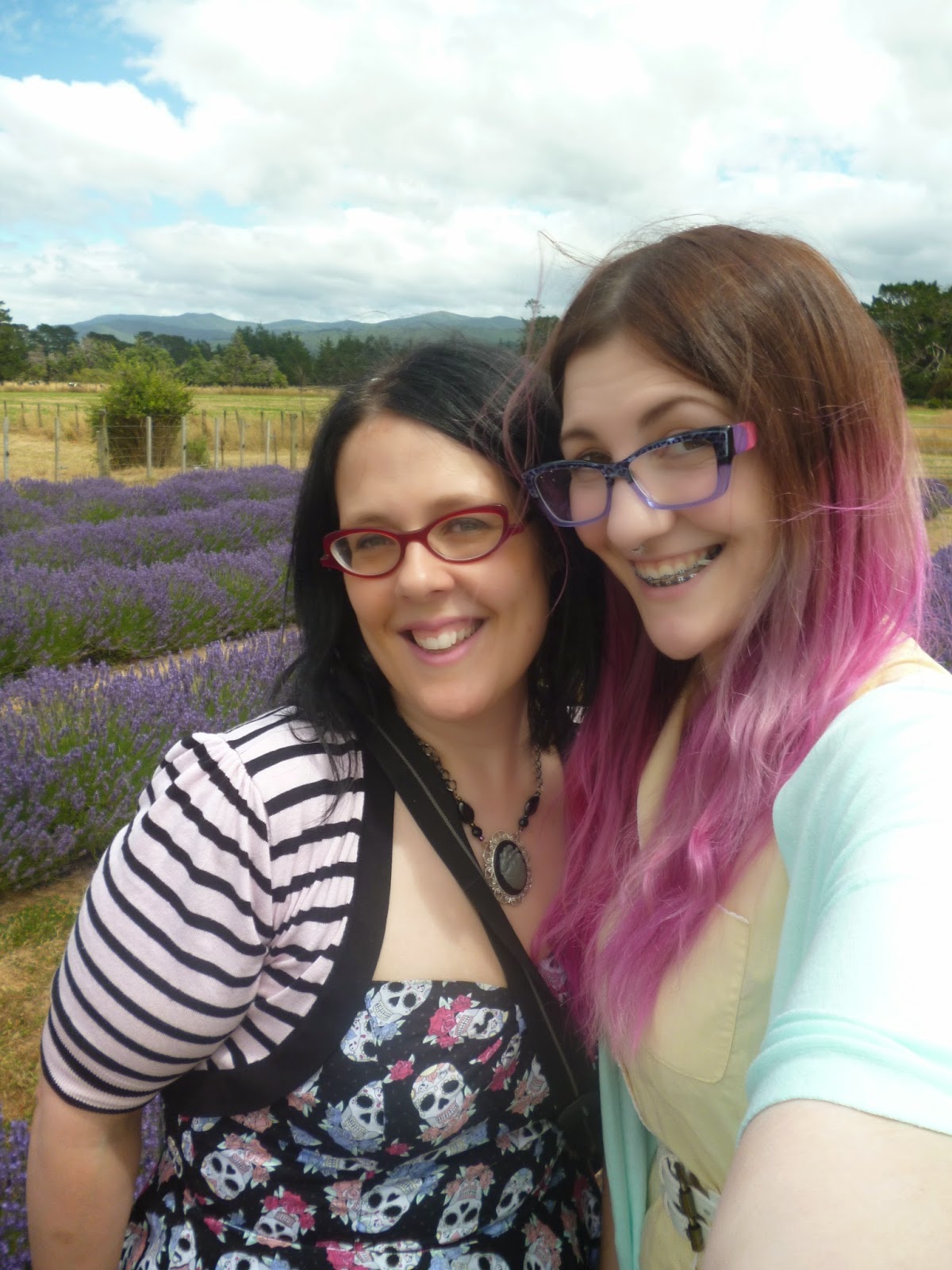 Obviously if you're hanging in a lavender field you need to take selfies because of reasons...... 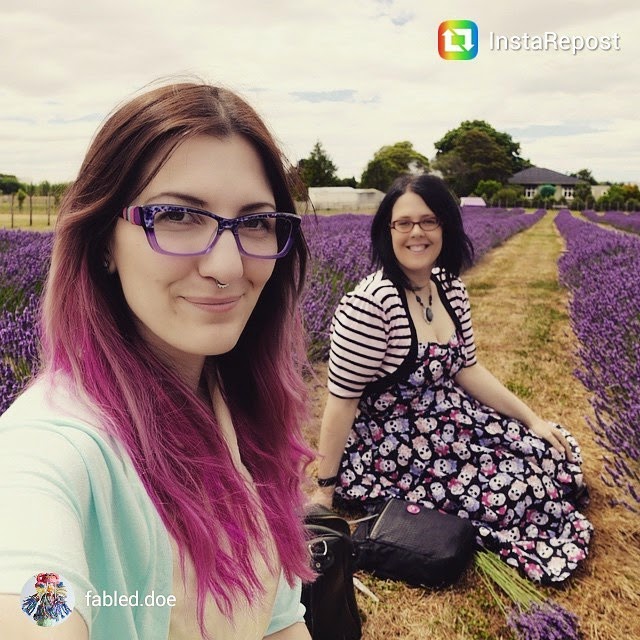 This final photo was taken by Ria on her fancy camera - its my favourite from the day! It makes us look so magical. In case you were wondering what I'm going to do with that bunch of lavender. I think I'm going to dry it and use it in soap. Watch this space! Also I need to make lavender cookies with my culinary lavender and of course I need to make lavender tea as well. I think lavender MAY be taking over my life.
Posted by Trees at 5:09 pm

Beautiful photos! Lavender always looks so pretty, but I don't think I've ever seen them wild before. I'm not a fan of floral food / drink. (But then, I am fussy), but I've wanted to make my own soap for years. I'm gonna have to give it a try sooner or later! xx

You ladies in lavender look beautiful. Looks like a photographic paradise. Xx

Omg lavender picking, how amazing! I can only imagine how beautiful it must have smelled! Also you two looked gorgeous! I love your skull dress and her pink hair! :)

That's so cool! I've never seen a lavender picking field before! I guess I never really thought about where it came from! Ha! What a great day out it would be.

I've also never heard of culinary lavender before, what can you cook up with it?? xx