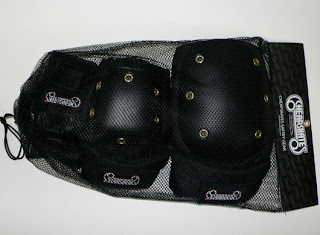 So after my recent adventures in falling over at skating practice, whilst wearing safety pads owned by another derby girl - I decided it was really time to buy a set of my own.
Falling down with a set of safety pads did hurt a bit - but I imagine falling over without a set of pads would hurt a lot more!
The only problem with buying a set of pads was heading to the skateboard shop - namely cheapskates. I know I shouldn't be worried about going to the skateboard shop but it's just such a "man zone" and I thought I would find it kind of intimidating.
So I figured the best method was to head in and act like I owned the place, and not be intimidated by the skatey boys working in the shop.
Well the whole experience was not as traumatic as I thought to be - turns out that the skatey boys were actually more like guys my age and they were really nice and wanted to know when the derby league was getting set up and what was happening in Wellington with the whole scene.
So now I own my very own pair of safety pads - just the same as in the photo, I am set for derby greatness and I am much less intimidated by skateboard shops...
But I did still fall over twice when I joined in (well joined in as much as I could for "freshmeat" ) at derby practice tonight - but it hurt less with safety pads of my very own.
Posted by Trees at 5:54 pm

Man - you're awesome! I love the whole Derby league thing :-) I can't wait to see some pics of you actually going for it. Te he! Do you have any hidden aggression there though trees - all I remember is you smiling lots ;-) I bet skating will give you buns of steel though. Maybe you'll be giving Gina's snowboarding buns a run for their money - I hear hers are pretty good right now :-) te he