Last Sunday Rich and I had a stall at Craft 2.0 but there was much confusion leading up to the event!
Initially we were told that Craft 2.0 would love to have us but they had run out of room, they may be able to make more room at the museum (New Dowse Gallery) and if they do this then they will let us know and we can have a stall.
We waited and waited to hear if we had a stall - but after no word from the organisers we thought we must have lucked out but planned to go out to the New Dowse and check out the crafts at Craft 2.0.
But then on Saturday morning Rich checked our e-mails and discovered that we DID in fact have a stall at Craft 2.0 and the nice folks had sent us a map of where we would be sitting on the day.
We had a brief **yikes** what do we do moment - but decided to push on with doing Craft 2.0 so spent all our Saturday night crafting our wee hearts out.
Below is one of my new fimo designs that I came up with on the night - it's a pulled tooth (in a cute way!) which appeals to my dark side. 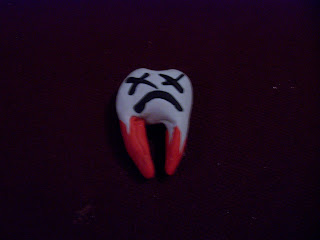 The Craft 2.0 markets were pretty darn cool when we got there - although we ended up being REALLY hot as we we stuck in a spot in the court yard of the New Dowse with no shade what so ever! But we seemed to escape the day with only the smallest amount on sunburn (due to the fact that Rich was smart enough to bring sunscreen).

There were a lot of really cool stalls at Craft 2.0 and I could have spend HEAPS of money - but I was quite restrained. I bought a soy candle making kit, which I haven't had a chance to use yet and I guess it will stay unused till after Christmas at this stage **sigh**.

But I did manage to pick up another super cute soft toy - I call this one corduroy boy! 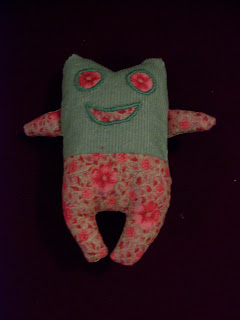